RUSH: Look at the Stephanopoulos interview. Isn’t that one of the reasons so many of you were bothered by the Stephanopoulos interview? “Why let Hillary Clinton’s war room chieftain into the White House to do a 30-hour story? What is there to gain by this?” “Well, Rush, it’s what presidents have to do. They’re presidents of all the people. They’re presidents of all the media.” Have you seen the latest controversy over this? Oh. So they’re in the Oval Office and they’re talking issues and stuff, and Mulvaney has a coughing attack, and Trump says, “Get out of here! You can’t just keep coughing in here.”

You know, Trump is a famous germophobe, too, which kind of argues against the hiring of prostitutes to urinate on the bed in Moscow while he’s watching it. He’s a germophobe. He would never do that. So his chief of staff goes in a coughing spasm here; he orders the chief of staff out of the room and says to Stephanopoulos, “Let’s start this over. You don’t want this coughing on the tape, right?” and Stephanopoulos says, “Okay, we’ll start it again.” Now, I checked the broads on The View… Ahem. The women, the broadcasters on The View — Maude Behar and so forth?

They claim that Mulvaney was trying to send Trump a secret message with the coughing and that Trump is too stupid to know it. Like Stephanopoulos was asking, “You really did collude with the Russians, right? Even though Mueller didn’t find it, you really did.” (coughing) Mulvaney starts coughing, and Trump stops everything; orders him out of the room. Yeah. The broadcasters on The View think that Mulvaney was trying to signal Trump to stop whatever you’re talking about; don’t go any further, and that Trump was too dumb to see it. Now we got a controversy over Mulvaney coughing during the interview.

ABC is making a big deal out of that.

RUSH: By the way, the Mick Mulvaney coughing occurred while Trump was answering a question about releasing his financial records. That’s what is called in the broadcasting business an outtake. And there aren’t too many of these networks that actually air outtakes, but they did with Trump.

I’ve got my sound bites out of order already, but I’m looking for — Mike, what is the bite with Mulvaney coughing in it? I’ve gone past it. Do you have the number off the top of your head real quick? If you don’t, tell me, and I’ll move on to something else. You don’t. Okay. Never mind then.

Let’s go to sound bite 13. This is the big thing that Trump said. Wait. Hang on just a second here. Hang on. It’s number 8. Audio sound bite number 8. This is the outtake with Trump and Mulvaney and coughing and Stephanopoulos asking about financial records. 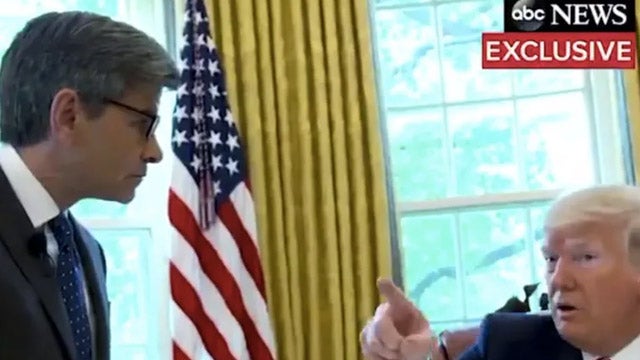 THE PRESIDENT: At some point I hope they get it ’cause it’s a phen –

STEPHANOPOULOS: Your chief of staff.

THE PRESIDENT: If you’re going to cough, please leave the room.

UNIDENTIFIED CAMERAMAN: And just get a shot of, you know, I’ll come on over here. Just to change the shot.

RUSH: You just can’t cough in here when I’m telling you about my financial records, just can’t do, get out of the room, you gotta stop coughing, it’s rude. They play the outtake. And, of course, “That was Mulvaney trying to signal Trump to not go there, not answer it, but Trump was too stupid to know it.”

Now, this is the biggie, by the way, audio sound bite number 13. Stephanopoulos said, “You clearly believe there was a group of people working against you. Do you think President Obama was behind it?”

THE PRESIDENT: I would say that he certainly must have known about it because it went very high up in the chain, but you’re gonna find that out. I’m not gonna make that statement quite yet, but I would say that President Obama had to know about it. This should never, ever be allowed to happen to another president again. A previous administration used the intelligence data and the intelligence agencies to spy on my campaign.

STEPHANOPOULOS: Do you believe that President Obama spied on your campaign?

THE PRESIDENT: I don’t know. But hopefully we’re gonna find out. 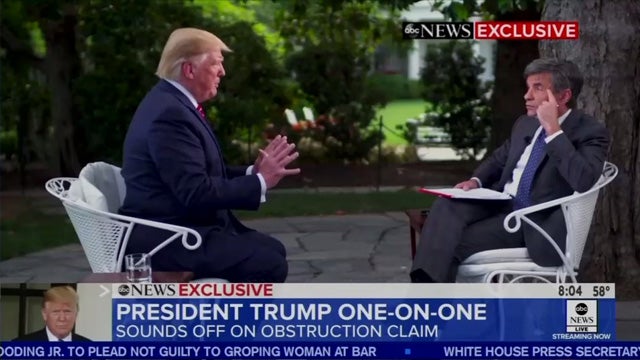 RUSH: I don’t know, but hopefully we’re gonna find out. Mulvaney wasn’t in the room then to start coughing. But that’s the right answer. Stephanopoulos: “Do you believe President Obama spied on your campaign?” “Do you think states ought to be allowed to stop people from using contraception?” Blah, blah, blah. Trump was I think wary, properly so, there. But that was one of the big pieces of news to come from this interview.

RUSH: Rob in Reno, Nevada. Great to have you on the program, sir. Glad you waited. Hi.

CALLER: Hey, great to talk to you, Rush. Hey, I just had a quick question about the Stephanopoulos interview with Trump —

CALLER: — over the weekend in which case Trump indicated that he thinks that Obama knew about the deep state FBI investigation into his campaign but wouldn’t go so far as to say that he initiated it. One of the things I’ve always found interesting is that if you look at the four months prior to the election, particularly in July, when the “lock her up” chants began and then October 9th and October 12th, when Trump stated publicly that he was gonna have his AG open an investigation into Obama’s (unintelligible) you know, the various entities, DOJ, FBI, who investigated the email scandal, Hillary Clinton’s email scandal. He said that on October 9th and October 12th and within that same month, the Obama administration secured their first FISA warrant against Carter Page October 2016. And, to me, perhaps it’s a coincidence. I can’t prove anything causal. But I find it very interesting in the same month that Trump says he’s gonna have his AG investigate, the investigate —

RUSH: Well, I don’t doubt that that’s a part of it. But it had been going on before that. The investigation into Trump and the setting up of people started before October.