RUSH: This is hilarious. I don’t know if you’ve heard this. President Trump has announced — he-he-he-he-he — he is going to live tweet the Democrat debates. Folks, this is going to be revolutionary.

And so, this afternoon on PMSNBC, Andrea Mitchell of Andrea Mitchell Reports, NBC News, Washington, was interviewing Crazy Bernie about this. And she said, “The president is talking about live tweeting while you guys are on the debate stage. What is your reaction to that?” 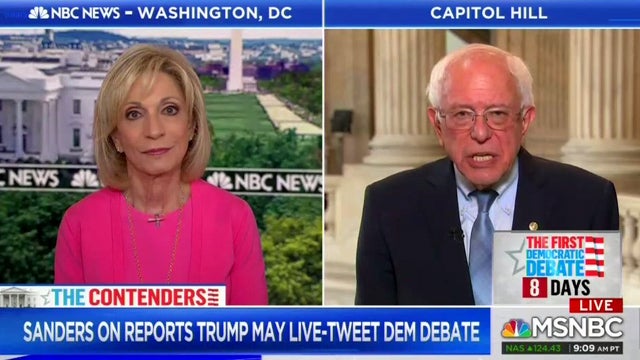 SANDERS: Well, I’m surprised that he has the time to tweet. I thought he’d be watching, you know, some Fox TV program. Uh, look. He can tweet all that he wants to tweet, uh, but let me just say this. You have a president, who, despite what one of his supporters mentioned a moment ago, is in fact a pathological liar, he is a racist, he’s a sexist, he’s a homophobe. And he is a religious bigot.

RUSH: And there you have it. Racist, sexist, bigot, homophobe, the cliche, that’s all they’ve got about every one of us, folks. And so Crazy Bernie is asked by Andrea Mitchell, the president is gonna live tweet the debate, and he just loses it! He can’t stand it! The Democrats are not supposed to get that kind of scrutiny. Crazy Bernie is used to Democrat debates being on Saturday nights, when Hillary Clinton was the opponent, so that nobody saw them. And now he’s just beside himself that with Trump live tweeting, Trump is going to beat the Drive-By Media in characterizing and creating narratives. And they can’t stand it!