“Since then, Trump has repeatedly joked about staying in office beyond the two terms the Constitution allows. Jerry Falwell Jr., Trump’s most prominent evangelical supporter, has suggested Trump should get two years tacked on to his first term as ‘pay back’ for the Mueller…” They’re taking all this literally! (laughing) They really think that Falwell and Trump are conjuring up a two-year additional term for payback just like they really thought Trump was serious when he asked Russia to find Hillary’s missing emails. 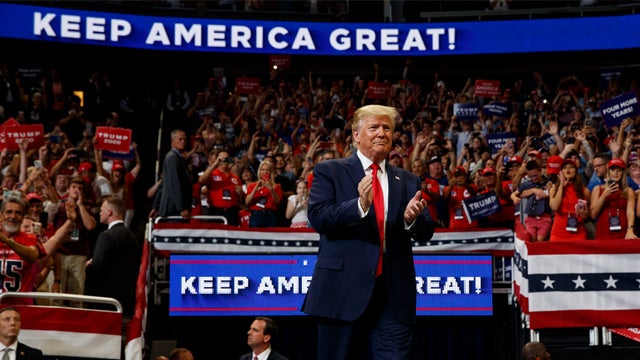 Trump was very astute. He knew what was being planned and the headline that would come if Trump had answered, “Of course I will, Chris! I’m a great American. I’m a great patriot. If I lose, absolutely I’ll acknowledge that I lost.” They wanted the headline the next day: Trump concedes election. Trump acknowledges defeat likely. Something like that, and then Hillary Clinton and the Democrats went on a tirade talking about what an open threat to democracy Trump is because he will not say that he would unilaterally accept the results of the election.

This debate was, what, two or three weeks prior to the election. How wise was Trump? So here comes the election; Trump wins in an Electoral College near landslide. It wasn’t, but it was not close in the Electoral College. There was no way any kind of a recount was gonna change anything. It was slam dunk. And who is it that refused to accept the results? It’s Hillary Clinton! It’s the FBI, the New York Times, the entire the Democrat Party, all the rest of the Drive-By Media.

And now, what have I told you? They cannot innovate. They cannot do anything but repeat and replay the past. “What if Trump Will Not Accept Defeat in 2020?” I’m telling you, everything is a replay. They were so certain they were gonna win in 2016; Hillary was gonna win in a landslide. They did not acknowledge any other possibility, and they’re doing it all over again, and they’re doing it on the same basis. Back then, they thought, “There’s no way this guy can win. Everybody hates him.

“There’s no way this guy can win. This guy’s a buffoon. Everybody thinks he’s a joke,” and they’re repeating that. “There’s no way Trump could win! People hate Trump now, even the people who voted for him.” Trump’s base is intact, and people who are honest in the political consultant and analyst business will tell anybody who’s willing to listen. All they had to do was see the rally in Orlando on Tuesday night. But even without that, Trump’s base is there. It hasn’t gone anywhere — and, in fact, it may have grown.

But as far as Democrats/the media are concerned, “Everybody hates Trump! Trump’s a buffoon. Trump’s a joke. People are embarrassed they voted for Trump. It’s only a matter of time now — and Trump is actually planning on tacking on an additional two years, right? ‘Cause he had two years stolen from him. Jerry Falwell said so!” This is comical to watch the Democrat. They’re self-imploding, and now they’re trying to take Biden out! I mean, you ought to see the stuff I’ve found today that is just dredging up all kinds of dirt on Biden. But none of it’s in the Drive-By Media yet, which tells me that they’re shopping it but some of the Drive-Bys won’t run it so they’re taking it to places like the Washington Examiner or New York Post Page Six.