Well, the first thing Mayor Pete did, he went in there and fired the black police chief. Then some crime happened, and the perp is black, and Mayor Pete is in big, big trouble because of what has gone down about this. He’s having to answer questions about why he’s a racist and this and that. Here’s Charles Payne’s tweet:

“The coolest democrat running for president has an interesting track record as mayor. Mayor Pete came into office and tossed out the black police chief and since blacks on the police force have dwindled to 5% from 10%.” Mayor Pete’s cut the police force, African-Americans from 10% to 5% after getting rid of black police chief, and so Charles Payne says: “I’m so baffled why anyone thinks the Democrats should own the black vote.”

Well, anybody with any common sense is puzzled and has been for years. What is it about — I could explain it. The answer to this is very simple. All you have to do is go back to last week. We had an NBC News infobabe and a New York Times infobabe both writing about Biden and the two segregationist senators from the forties and fifties and sixties that he was good buddies with and about whom he’s extolling virtues, and they both wrote about these two senators as Republicans.

Whether they knew or not, whether they were lying knowingly, the simple fact is that because of branding, it’s simply impossible for any Democrat to be a racist or a segregationist. It must have been that they’re Republican. It’s simple branding is why that happens, and it’s been successful.

RUSH: By the way, Mayor Pete… We got some audio sound bites coming up. Mayor Pete did not look good in video over the weekend. He did not look good interacting with his own community there in South Bend. He looked kind of uncomfortable. He looked nervous. He looked ill-equipped. This is all about the racial component of the South Bend police department and what’s happened with him as mayor. He fires a black police chief, and then the black component/makeup of the police force drops to 5% from 10%.

You know, it’s easy to spot the beginners, the newcomers, the amateurs, because he started repeating things like “getting along.” “We’re all gonna get along. We’re not gonna accept any discrimination. It won’t happen. I’m not gonna accept any discrimination here in my town.” Even while very large, very mad black people were yelling at him. He did not come across to my trained eye as somebody who could handle anything much more than a beer summit in the backyard at the White House. 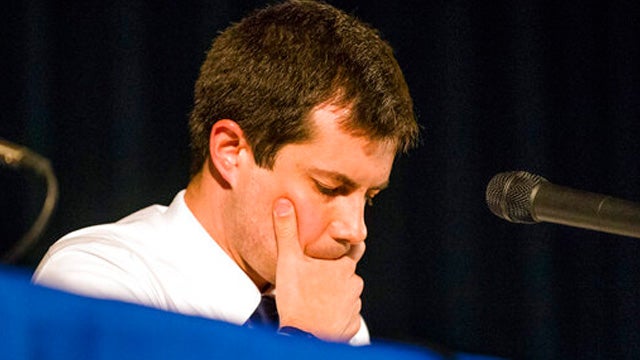 If I’m a Democrat running for the presidential nomination, I’m teeing up these you clips and getting ready to call attention to them and run against him. Looked way out of his comfort zone is all I’m saying. Way, way out. See, Mayor Pete’s had the typical media free ride. Ever since I said, “Keep a sharp eye on Mayor Pete” after the South by Southwest town hall, he has been almost like the chosen candidate.

He fits so many bills. He plugs so many holes in there for the Democrats, checks off so many boxes. He’s gay; he’s young, kisses his husband on TV; slices and dices Trump really well; very smooth. But then faced with some unhappiness and discontent from the very people he is governing, it was not… I’m sure a lot of people were kind of surprised, expecting a little bit more.