RUSH: I want to show you something. You know, the Democrat debates begin tonight. Did you see Trump stole my line, that he doesn’t want to watch these debates but now he has to? You haven’t heard that? We’ve got it coming up in the audio. I’m not accusing the president of theft. That’s not the thing. A good line’s a good line. The truth is truth. I don’t want to watch this garbage, either, but I have to.

And he was asked if he was gonna watch. (paraphrasing) “Well, I don’t want to watch it. It’s the last thing I want to do, but I got to because that’s what I do now, I gotta watch it.” So the president and I will be watching this fiasco together tonight. Not together, but at the same time.

So Elizabeth Warren is in Miami because that’s where the debate is. I just want to show you a photo here — go ahead and put it in the switcher. This is Elizabeth Warren visiting a Florida migrant detention center. There is so much media there that you cannot see her. I drew a red arrow pointing to Fauxcahontas in this sea of media people. It’s all media there! 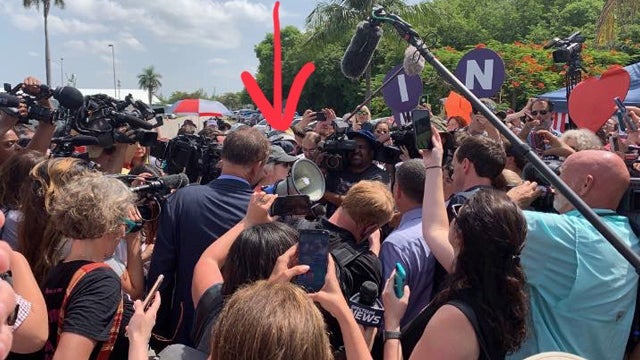 There’s so much media, you can’t see her. If you were able to zoom in on the photo, you would see that she’s wearing some kind of a baseball cap. I mean, this is classic. There’s more media than there will be people in the debate tonight! There’s more media in that picture than people in Florida who care about where Elizabeth Warren is. It’s stunning!

And I’ll tell you what it looks like to me. It looks like the battle of the Little Bighorn in reverse. You got one poor Indian there surrounded by a sea of palefaces. That’s what it looks like to me. I looked at that and I said, “Oh, my gosh. It’s George Custer! George Custer is surrounded here!” Well, you do. You have Elizabeth Warren who is an Indian and she’s surrounded by a bunch of paleface media people there, battle of Little Bighorn in reverse. All right. We may go back to that photo, I mean, ’cause to me that is illustrative of the situation.

Apple News on your iPhone, your iPad, they got this big section with profiles on all the Democrat candidates so that everybody is so excited.

RUSH: Now, earlier we showed you — switch that picture of Fauxcahontas back up on the Dittocam. We showed you this picture when the program began. If you’re watching on the Dittocam, I’ve drawn a red arrow on that photo. That’s Elizabeth Warren at a detention center, calling attention to the plight of illegal immigrants being inhumanely treated by Donald Trump.

Now, you can see that — well, you can’t see her. She’s nearly invisible. She’s the Native American there wearing — it’s a grey baseball cap right under the red arrow. Everybody else in that photo is media. It looks kind of like reverse Little Bighorn. Looks like a bunch of palefaces surrounding an Indian chief and about to wipe ’em out. I’m sure that escapes her, but that’s what it looks like.

Well, before we got to this scene, Elizabeth Warren — now, today there’s a big vote on emergency border funding, starting about now. That’s when the vote is scheduled in the Senate. This is the thing that Pelosi and Trump have been haggling back and forth over, the $5.4 billion.

Instead of going back to Washington to the Senate vote on emergency border funding, she is holding a photo-op outside the Homestead detention center. Homestead is where Hurricane Andrew went through and pretty much leveled the place. And that’s where the detention center is. And she’s holding a photo-op out there to talk about it, the need for emergency funding and she’s avoiding the vote.

Now, her excuse is, “Well, I have to be here in south Florida because of the debate.” By the way, I have a little snarky note from the staff on one of my five computer monitors here. I said the debate is 90 minutes and each candidate, there’s 10 of them, they get nine minutes.

There’s a note up there. “Debate from nine to 11 tonight, dash, two hours.” I know it’s two hours. I’m talking about actual program time, 90 minutes, by the time you have moderator questions, commercials, and everything else, they’re gonna be divvying up essentially 90 minutes of substance. I’m kidding about the snarky note. Don’t take it personally in there.

Now, we have audio. Here is Elizabeth Warren outside the Homestead temporary shelter for unaccompanied children just earlier today.

WARREN: What is happening at Homestead to children, what is happening as the direct result of activities of the United States government is wrong. It is a stain on our country and we must speak out. We speak out as a people, we speak out as moral citizens, not just of the United States, but of the world. We will stay here at Homestead until this facility releases these children and closes down. (crowd chants “shut it down.”)

RUSH: Is she gonna stay there through the debate? She says she’s not leaving ’til they shut the thing down. It’s a total, total photo-op. This is the kind of thing that a caller last hour, “Will Biden be asked about the Obama administration’s relationship with the Russians during all that.”

And you can look for a lot of theatrics like this between now and the end of these debates tomorrow night. These people are gonna have to do something like this to get noticed, to stand out. And they’re gonna be pushing the boundaries and the envelopes on this, folks, ’cause there’s so many of ’em. Twenty candidates over two nights.