What to Expect at the Democrat Debates

RUSH: Belkus in Miami, you’re next. Great to have you on the EIB Network. Hello.

CALLER: Good, good. My name is Belkus Vigil. I’m from Miami, Florida. I’ve lived here, was born here all my life. And I just want to tell you I’m a Rush Babe, and I have your 24/7, and I just got my husband a red golf shirt with EIB and the American flag.

RUSH: Oh, you got the red one, eh? That’s great. That’s wonderful.

CALLER: He took it to China with him to visit my son. (laughing) So we’ll see what the reactions are once he wears it. 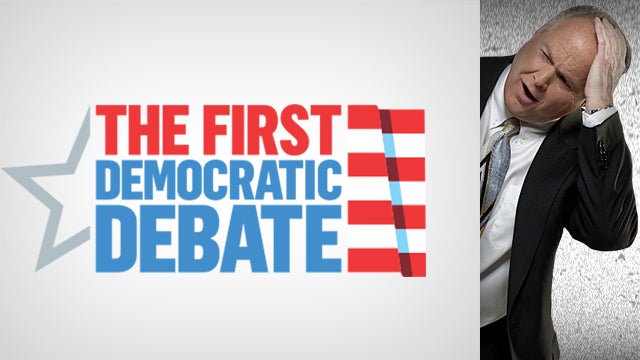 RUSH: Ah, he’ll be treated as a hero over there.

RUSH: The ChiComs love us.

CALLER: They do, they do. They want to be just like us.

RUSH: Absolutely they do.

CALLER: I was calling basically because I drove by the art center where they’re gonna have the debates, and there was a giant green bus outside that says “tax the rich and we will all live better” and I was just curious what you thought of that and also wanted to know who do you think is behind that giant green bus, which has to have cost a lot of money ’cause it’s one of those touring buses.

RUSH: It could be the Democrat National Committee. It could be a particular candidate. Did you see a candidate’s name on the bus?

CALLER: No, no candidate. Like three Millennials wearing T-shirts saying the same thing and then it had a giant gold ring with a big diamond in the front, and it said “tax the rich,” and it was like a Monopoly card.

RUSH: Yeah. Here’s the thing. It’s amazing to me as I see things like this that you’ve seen, and without getting too deeply into it, it’s amazing what being alive awhile teaches you. Like “tax the rich and we’ll all…” I first started hearing this when I was 17 or 18, maybe prior, even earlier than that. And what strikes me is the cyclical nature of all of this and how the left and its basic ideology never changes. It’s never upgraded. It’s never modified, there isn’t any innovation. That’s as old as hills. And it works with young people every generation. It works with a certain number of people, a certain percentage of the population every generation, and there’s no stopping it.

That’s what experience teaches you. When you’re younger… And I’m not accusing you of being anything here; don’t misunderstand, I’m taking the occasion of your call to share the experiences I’ve picked up over this. In your early stages of being involved in this, you think you can go in there and change people’s minds. And you get in there and you tell ’em, “Taxing the rich isn’t gonna do anything. It isn’t gonna make richer.” You know, I could do the riff on this. I’ve done it for 30 years. “How is taxing the rich more gonna help you?” I ask people. “What’s it gonna mean to you?” And you can eventually get them to admit that they don’t think it’s gonna help them, it’s just gonna punish the rich, which is what they want. They want people who have more than them punished. There’s resentment. There’s a belief that the rich don’t share, that the rich are greedy and selfish, which is nonsensical.

Without the wealthy and the rich and successful capitalistic enterprises, nobody would have anything. There wouldn’t be a growing economic to speak of. So there’s a certain amount of evidence that goes into this, at some point you just learn to ignore it because it’s always going to be there. There’s always gonna be a segment of the young population that believes the rich are the big enemy and if you tax ’em and punish them, that everything’s gonna be better off. No matter how hard you work to change minds, no matter how much time you spend trying to persuade people, that group of people is always going to exist. “Tax the rich and we’ll all live better.” I tell you, there’s another frustrating thing about it. It’s right out of the communist manifesto. It’s right out of socialism. The world is replete with places where that has been done. There are no success stories. 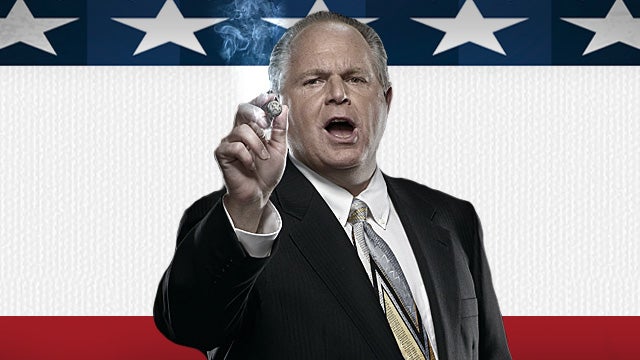 There is literally no success story anywhere on earth in the scope of human history where socialism or communism or any of the economic policies that attach to it have ever made people wealthier, have ever created more abundance, have ever led to the sustainability of economic growth. It just doesn’t happen. And yet it remains a huge attraction. It remains a huge lure to people. So the fact that something like that would be outside the Democrat debate arena tonight, it’s not a shock. It’s not a surprise. And I don’t think it’s effective in persuading people one way or the other. It’s just sort of like a branding thing that’s got to be there because the Democrats are in town. Anyway, glad you called, though.

RUSH: This is Stacy in Cincinnati. I’m glad you called. Hi.

CALLER: Hi, Rush. I just wanted to ask you a question but I’d also like to make a comment to Cynthia, your first caller. Register Republicans to vote. I have a feeling this 2020 election is going to be a bloodbath, and we have to stand up for our values. I was a Democrat until Trump ran and I voted Republican ever since 2016. Back to my question. When Biden is… They’re having the DNC, you know, everyone going up there, which I think is a big farce. They’re not even letting Fox on. Do you think anyone will ask him in regards to what they did, what his administration did during the whole Russia thing? You know, I watch cable news. I get my news from social media. I don’t see anybody of the Obama administration saying what happened, what did they do, what things…? Because it’s all a lie.

RUSH: Well, I know the nature of your question is, is somebody gonna ask any of these Obama people why they didn’t stop this? If they all knew that the Russians were trying to commandeer the election… Which is bogus, I hate these premises. The Russians could not have affected the outcome of the election. Nobody has ever alleged in all of this that they did, not even Mueller in his indictment. But I know what you’re getting at. Why won’t anybody ask anybody from the Obama administration? (impression) “It was so bad, it was so obvious. Why did you spy on the Trump campaign instead of stopping it?” Well, we all know the answer. It wasn’t happening.

It wasn’t happening any worse than it always happens year after year after year, the Soviets, then the Russians, the ChiComs, the North Koreans, everybody’s trying to spy on everybody, everybody’s trying to hack, everybody’s trying to infiltrate. They’ve done a great job infiltrating our universities and school systems, the communists have. But no. Let me set this up for you. We’ve got two nights of this debate. We’ve got essentially 20 candidates. We got 10 candidates a night. Now, follow me on this, folks. Stick with me here. We got 10 candidates a night. I think the B-Team is tonight, the A-Team’s tomorrow night. So Bite Me won’t show up ’til tomorrow night. Each debate is 90 minutes. You got 10 candidates, you got 90 minutes. Are there commercial breaks or not? Let’s assume there aren’t. That means if everything’s fair and everything is equitable and there’s sustainability and fairness, that every candidate will get nine minutes, nine minutes.

How in the name of Sam Hill can anybody stand out in nine minutes? So here’s what to look for. In the scrub debate tonight, the bench debate, look for these people to attack the people in the debate tomorrow night. (interruption) Oh, there are commercial breaks? Oh, my God. Then it’s less than nine minutes. It’s even worse than I thought, or better, depending on how you look at it. You got the moderator questions, you got five segments, and you got more commercial breaks. So let’s figure six minutes per B-Team candidate. Now, you know what’s gonna happen? One or two, or maybe three or four are gonna say, to hell with these rules, first off, and they’re gonna try to get noticed right off the bat. Whatever they think they have to do, either attacking somebody else or ripping into NBC for a rotten format, or complaining they should have been in the A-Team debate, which is tomorrow night.

The challenge for them is gonna be, do they go after Trump or do they go after each other? And I just think whatever rules have been set up, it’s gonna be increasingly difficult for the moderators to hold people to the rules. There’s 20 people running. These people have got to stand out. They have got to. They don’t have much time to make an impression. They know this. They can’t be polite. They can’t sit there with their hands folded and wait patiently for their turn. They can’t answer the question that’s asked. They have got to say– we’re talking six minutes each here – they’ve got to say what they want to say out of the box no matter what they are asked. 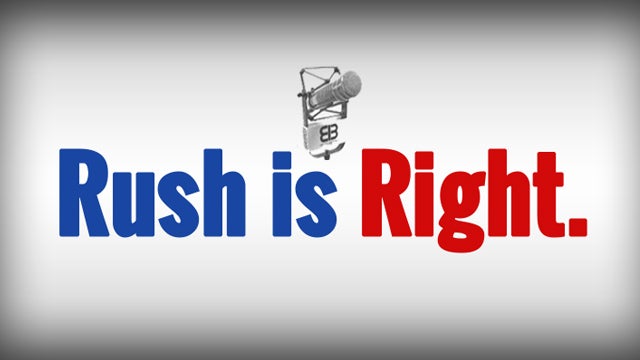 And for every one of these candidates tonight, that’s gonna be a different thing. Elizabeth Warren has 20 different spending plans to get through, for example. Do you think anybody will ask her about the native Indian constituency that she brings to the debate? Of course not. Will anybody ask Biden about the…? No. You know, the moderators are gonna want to stand out too. The moderators are gonna want to make a name for themselves. You got five moderators here over two nights. Everybody involved here…. And remember looming over all of this is Donald Trump.

So you got five moderators, you got 20 Democrats, you got 25 people here who are each gonna be competing with each other to see who can be the most effective at ripping Trump to shreds. That’s number one. Then they’re gonna figure out, is Plugs the real frontrunner, and if so, there’s got to be a gang-up against Plugs. It’s why the Democrat powers that be are worried about circular firing squad ’cause they’re gonna have to start shooting at each other first because they are the immediate obstacles. Before you even get to the nomination, you gotta wipe out all these other Democrats who are also seeking it.

But with the limited time, the desperate need to do anything to grab attention, to get noticed in an unforgettable way… I mean, Katy bar the door as to what one or two of them might decide they have to do to achieve that. Launch the F-word at some point and make it get bleeped? I mean, anything is possible here. You gotta understand, these people arrive here tonight, tomorrow night with so much hate that has been compressed over the days. I mean, it’s ready to, like, boil over and explode in these two nights. The hate these people have over what happened in 2016, the hate they have for Mueller bombing out…. So predicting who’s gonna get asked what, what they’re gonna say, that’s a toughie in a specific sense.