Trump Dominates on the World Stage

RUSH: Speaking of Trump, he sent a thank you tweet to Prime Minister Abe of Japan, Shinzo Abe. I happen to know Trump loves this guy, and I happen to know this guy loves Trump. This guy loves playing golf with Trump. This guy would come to the United States just to play golf with Trump. So Trump met this guy in Japan at the G-20. That’s another thing, folks. The G20! Do you realize how nothing ever comes out of these big G-8, G-10, G-20 meetings, until Donald Trump started going to them? 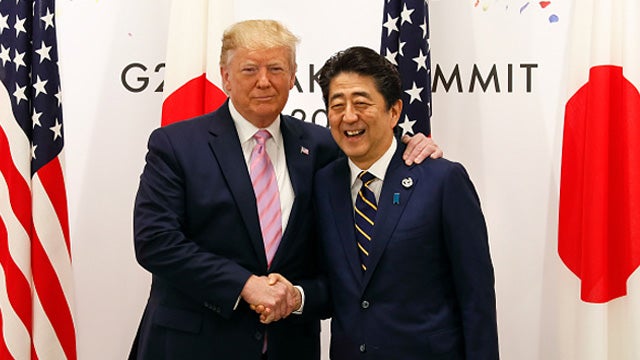 And then all hell breaks loose! A lot of things start happening for America. For the most part, they’re just social get-togethers. Speaking of photo-ops, that’s all they are. They come up with toothless, meaningless agreements like the Paris accords and this kind of stuff. Nothing ever changes, nothing ever happens. They just slap each other on the back and applaud themselves as being elites. Trump goes to these things and actually effects major change, like this thing with North Korea. Anyway, Trump tweeted, “Congratulations to Prime Minister Abe of Japan for hosting such a fantastic and well-run G-20.

“There wasn’t a thing that was missing or a mistake that was made. PERFECT! The people of Japan must be very proud of their Prime Minister.” Okay, it’s a tweet, but you know what else it is? It is a very public thank you note. Very few people send thank you notes anymore. Just doesn’t happen, ’cause you can tweet one. You can instant message one. You can email one. But they’re very powerful when you get a personal thank you. I guarantee you, Shinzo Abe is gonna be ecstatic with this — and it’s not because Trump’s an idiot. It’s not because he’s a buffoon.

It’s not because he doesn’t understand social graces or any of that. It’s quite the exact opposite. You know, you watch all this stuff happen… (sigh) I touched on this last week. I have to work hard at times, folks. I don’t mind it. I’m not complaining. I’m observing. How little the Democrat Party has changed. I’ve heard it all. None of what the Democrat Party is suggesting at any of those debates last week, nothing was new. It’s the same complaints. It’s the same whining. It’s the same victimology. It’s the same “raise taxes,” the same “free this, free that,” only it’s getting better, and the free stuff is gonna go to more people.

Now they want to give free everything to illegal immigrants. They just… Nothing changes! They are predictable to the point of being boring. In the process, they become predictably funny. Now, all weekend long she came out, they were whining about Trump making an historic step into North Korea. “It was just a photo-op! It wasn’t diplomacy, because Trump is an idiot. Trump doesn’t know what he’s doing. Trump was putting the world at risk. Kim Jong-un has Trump wound around his little finger.

“Kim Jong-un has got Trump dancing like on the strings of a marionette.” Just like they said Saddam Hussein was gonna run rings around George H. W. Bush if we ever went to war to kick Saddam out of Kuwait. Just like they said we had no way of beating the Iraqis in a desert war because we don’t know how to fight a desert war. Sam Donaldson ran a gigantic story on the number of body bags that were ordered for American troops that were going to perish because we simply didn’t have what it took to win because George H. W. Bush was an idiot and had no business taking us to war in a desert against such a brilliant military strategist as Saddam Hussein.

We beat them in a day and a half.

Same thing here. “Kim Jong-un is three times as smart as Trump, three times as crafty, three times as sinister. Trump’s a buffoon and an idiot. He doesn’t know what he’s doing! It’s just a photo-op. Trump is nothing more than a showman.” It’s the same thing over and over. There’s nothing creative about what they’re saying, creative or innovative in any way. The talking points were sent. They all stayed on point. It further made them mad that, apparently, Trump is the one that made the meeting happen.

And it happened as a result of a tweet invitation. “That’s not the way these things are supposed to happen. This is serious diplomacy. This is supposed to be set up months in advance with the media able to make arrangements for travel, logistics, and all kinds of to properly cover it. Trump doesn’t know what he’s doing,” because with the media, everything’s about them. Trump is winning, folks. Trump is leading on the world stage. You know, you look at these pictures of the G-20, and they contrast remarkably with how the media is telling us about them. 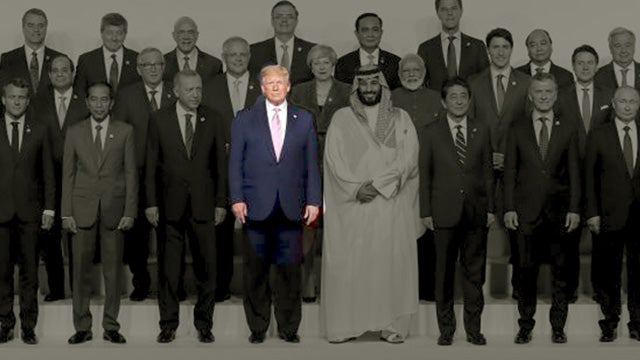 They think all these people should be shunning Trump. They think all these other G-20 leaders ought to be refusing to appear in photos with Trump. They think that they should not even go to the meeting if Trump’s gonna be there. That’s what they think. That’s what they hope. They think these people should be embarrassing Trump because Trump himself is an embarrassment. Except here’s Trump doing another thing that no U.S. president has ever done before, and the Democrat presidential candidates (as they illustrated in the debates last week), have no answers for how they would do anything better.

That’s the one thing, folks, to keep a sharp eye on. We’re living right now in pretty prosperous economic times. Not for everybody, but on balance, the statistics and the real circumstances are excellent. The Democrats are forced to lie about that, to try to convince people it isn’t any good, that you’re miserable, that you’re unhappy, that you have no future unless the Democrats are put back in power. But they have no answer for anything. They don’t have any idea what they would be doing better with North Korea or Japan or with the ChiComs.

They can sit there and yap and they can flap their gums and criticize, but they don’t have one answer for how they would do anything better. You go back and look when Trump was elected. They were all screaming, “Trump would probably start a war with North Korea because he doesn’t know what’s going on! He doesn’t understand! (sputtering) He’s just… He’s just… He’s just stupid, he’s just dumb, he’s uninformed, he’s gonna get us killed! Oh, my God. We’re all in danger!” Just like Reagan was gonna end up getting World War III started ’cause he was an idiot, and Gorbachev was the savior. 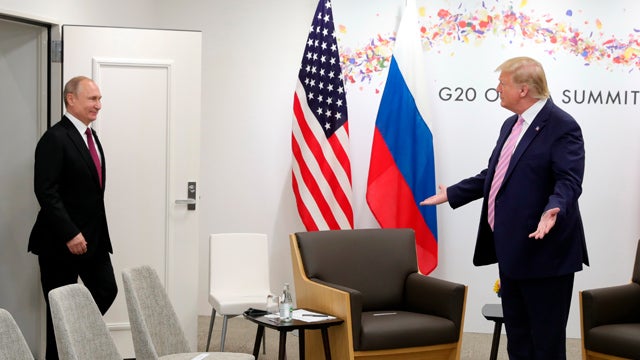 It never ends! It is the same recitation. Only the names and the circumstances change. No one could have predicted the amazing things that have happened this weekend, two years ago. Nobody would have predicted them. Now here’s Trump walking into that backward, Stone Age country and offering them (if they’ll listen to it) a little hope and a little light. He’s offering them condos on the beach. I’m sure he’s offered Kim Jong-un the top five floors of the highest condo building. He probably offered Kim Jong-un to put his name on the condo building.

We’ve been doing diplomacy for the same way for decades! We’ve been sending people like Madeleine Albright over to promise them nuclear power upgrades. We’ve been promising the ChiComs. In fact, the Clinton administration gave the Chinese communist government the technology to be able to orbit satellites. Back in the nineties, the ChiComs could not keep anything in orbit. So we shared the secret with Loral Space, a Clinton donor. Yeah, that’s been the shape of our diplomacy.

We have given North Korea the equipment necessary to create nuclear power structures, and who knows what they can do with it after that. That’s been the status quo. So comfortable for the swamp. Able to tell themselves, “We’re making real progress! Being civilized, being sophisticated.” Isolating North Korea has never done anything to progressing toward their denuclearization — and, of course, the relationship that Trump is able to forge with Kim Jong-un? Remember, Korea’s relationship with the ChiComs is crucial. So don’t think that Trump’s not thinking “ChiCom” when he meets with Kim Jong-un and forges a relationship there.