The Democrat Debates Were Phony Politics as Usual

RUSH: These people think… They probably are telling themselves they’ve already taken Donald Trump out. “It’s just a matter of the calendar, just a matter of getting to the election in 2020.” Just like they thought with Hillary Clinton. You know what we have a contest of here? We have a contest of genuineness and artificial phoniness — or maybe I should better call it real phoniness. The election of Donald Trump… At that Democrat debate, do you know what was on stage? The Democrat debate both nights, but especially the second night. 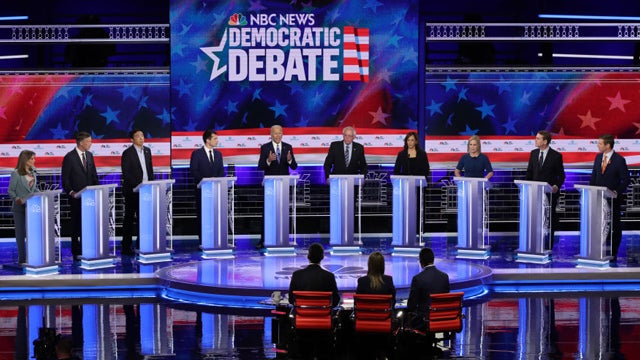 They don’t want anything to really do with people except control them. But Trump authentically likes people, and it comes across. Trump is guy… He gets bigger on stage. He’s becoming… He looks younger as the years go by, actually. These people shrink or will shrink on stage compared to Trump, and many of them are complete frauds. Obama was a fraud. Kamala Harris is actually a fraud. Booker is a fraud. Julian Castro. These people all claiming that they came from the wrong side of the tracks. Most of them are rich kids who are trying to attach themselves to horrors of the past they know nothing about and did not live.

RUSH: Look at what Trump has done for the economy, and they’re denying it. Then they stand up and say that they are for giving health care to every illegal who crosses the border. Free health care but not for native Americans! Native Americans are gonna be facing all kinds of premiums and copays, but the illegals that cross the border, every Democrat’s hand shot up when asked if you support free health care for illegal immigrants. Every hand shot up! Then it was time to deny it, and here’s how they deny it.

The Democrats oppose any effort to prevent anybody crossing the border into the country, and the people who do cross the border should be given free everything. So Julian Castro tweeted, “Nobody’s called for open borders. That’s just a right-wing talking point.” You most certainly did call for open borders. You just didn’t use those words. But you don’t oppose anybody coming in. You don’t want to stop anybody coming in. You don’t want to deport anybody who’s here illegally. Furthermore, you just sent an engraved invitation to 200 million people around this region to come on in by saying anybody that gets in gets free health care!

It’s gonna make for some fascinating TV ads once we get to the actual presidential campaign.