RUSH: I have learned since the Democrat debate last week that there’s a lot of people that don’t know what busing was, and it’s, in part, because the Democrats are trying to create a false illusion or a false premise about what busing was. Leading the effort to create a new narrative about it is Kamala Harris. Kamala Harris did not grow up poor. She did not grow up bused to a better school district because where she had to grow up was horrible. She’s the daughter of two PhDs, folks. She is not a child born on the wrong side of the light-rail tracks. 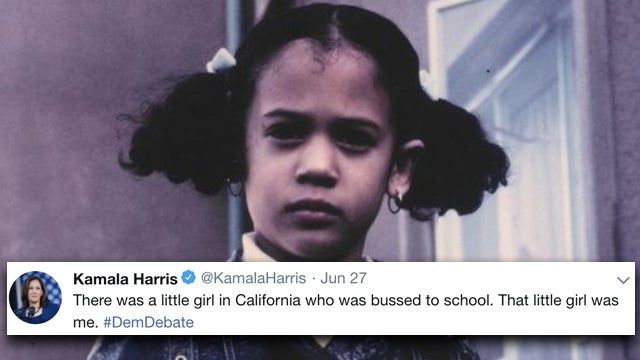 She’s not a child of poverty by any stretch of the imagination. She’s doing what a lot of Democrats do from Obama to others, Hillary. They inject themselves into a Hallmark era of the past that they have nothing in common with. Obama knew anything about the civil rights era? He wasn’t old enough. He wasn’t there. He doesn’t have “slave blood,” as their lingo says. So he had to go to Selma and put on the black lingo accent giving his speech and he had to come up with something about his dad being inspired and motivated by what happened at Selma.

It’s a required pilgrimage. He’s got nothing more in common Selma than somebody not yet born has with Selma. Kamala Harris, her story about busing… What she and the Democrats are trying to make people think busing was… It was not giving parents the opportunity to put their kids on buses in search of better schools. That’s what they want you to think it was. They want you token that the policy of busing was an opportunity to get your kid into a better school than where you were living or growing up. That’s not what it was, folks.

I mean, it wasn’t even close to that. What busing was, was mandating that students be taken from the neighborhoods their parents had chosen to live in and the schools that their parents had chosen to send them to and busing them 45 minutes to an hour across town to a school of predominantly the other race for the purposes of integration — forced integration, for the purposes of showing that if we did this, that people could end up loving one another. You know who resented it more than anybody?

Blacks. African-Americans resented it more than anybody, and not because they were segregationists. They didn’t like the whole premise, that something was wrong with their schools with them in them, and that their schools could only be made better if a bunch of buses of white kids came over. It offended them. Nobody was in favor of it. Nobody liked it. It was typical. It was typical Washington elite thinkers and bureaucrats trying to social engineer love and acceptance and integration by demanding that people’s kids be picked up and taken way out of the neighborhood to a place they didn’t know and didn’t want to go, to be shoved in with a bunch of people they didn’t know.

‘Cause the great social engineers thought that this would mean that a new era of harmony and race relations could rise up out of this dust. But it didn’t work on either side. Parents didn’t want their kids having to get up an hour earlier than normal to catch a bus in the dark to go to a part of town they chose not to live in. And then the people there were essentially being told that their school district wasn’t any good because they were in it, and so they needed people from other parts of town to make their school better.

That ticked them off.

The issue was whether kids should be taken from their own neighborhood schools — away from their friends, away from the teachers that they knew — put on buses, and driven all across town just to meet quotas. And you know who designed the quotas? The usual suspects of the Washington establishment: Federal judges, federal bureaucrats came up with numbers, quotas, as solutions. Kamala Harris wants you to think that she had to be bused, that her parents had to send her on a bus to a different school because she didn’t have a good school growing up.

That’s not what it was.

Nobody had a choice in busing!

That’s what ticked everybody off. And it didn’t work, it didn’t come close to working, and it got thrown out and disbanded. It took much longer than it should have to be illustrated as an abject bomb. Now, the Democrats want to bring this back up again? Let them. Because their number one constituency group, the African-American constituency group is who hated it. Everybody hated it. It sounded wonderful when it was proposed, until you found out that it was school district and your kids that were gonna get picked up and bused an hour away just to meet some quota.

But it was not as Ms. Harris wants you to think.

It was not parents having a choice in poverty-stricken neighborhoods to finally send their kids to a good school. In many cases, kids were taken out of good schools. In most cases, they were taken out of good schools and they were bused over to schools that were not as good. And they had chosen these neighborhoods to live in, as you know, because they wanted the school. And then here comes Uncle Sam packing up their kids and packing ’em off to a place that they chose not to live. “Well, that’s not fair, Rush!” But you don’t fix that by forcing people on other people. You think the left would have learned that basic premise. But they’ll never give that up because that’s the sole reason for their power, folks.

RUSH: Back to the phones we go, patiently waiting, people in Pittsburgh. This is Patty. Great to have you. Hi.

CALLER: Hi, Mr. Limbaugh. Thank you so much for taking my call.

CALLER: I know you moved on from the busing issue. I didn’t watch the debate, but listening to you, I got Kamala Harris… Her comments on busing, they just made me sick to my stomach. I’m a product of that. And if she came from an affluent family, she wasn’t bused because I didn’t come from an affluent family. I was bused. I don’t know if you’re familiar with Pittsburgh. We have a Port Authority system. They gave me bus tickets. I had to take a PAT bus into town and then a bus to the school that was on the other side of town.

RUSH: What year we talking about here, Patty?

RUSH: I was there.

CALLER: Yep! So it was horrible. But the people that grew up around me that came from families that had the means, they just put them into private schools, and it had longtime effects on me. By the time I got to college, alls I had learned to do was survive and be alone. So I had to quit college and —

RUSH: Okay. Well, you say I was right about busing and you were part of it. What…? You were bused to a school way away from where you lived, right?

CALLER: Absolutely. I had to take Port Authority bus to transfer from downtown Pittsburgh up to Carrick. And then when they had built another school, after I had sort of assimilated out there, they moved me to a school on the other side of town, which… (sigh) It was just —

RUSH: You had no choice in the matter. You had to do this, was the point.

CALLER: Had no choice in the matter.

RUSH: And you had to do it because you were a racist and you had to be integrated with people who were not your race so that you wouldn’t be a racist anymore. This was the reasoning behind it all. And then the people at the school you were being bused to, they were effectively being told that their school wasn’t any good because there weren’t enough really good people there. I mean, it was an utter disaster. But this is what we get with the brilliant, elite, sophisticated thinking. And here’s Kamala Harris.

Here’s a tweet: “I support busing. Listen, the schools of America are as segregated if not more segregated today than when I was in school. We need to put every effort, including busing, into play to desegregate the schools. The federal government has a role and a responsibility.” So, I hope the Republicans are keeping track of all this stuff for ads later on during the campaign whether she gets the nomination or not. This is what I mean. She wasn’t bused in this way. Her parents were PhDs. This is inserting herself into a circumstance that she really wasn’t, in an attempt to try to relate to people whose votes she needs.