RUSH: They just can’t stand it! They can’t come to grips with it. Ah, Trump meeting Kim… What a squalid place that was too. Did you see the DMZ where Trump crossed over that little concrete strip to meet the little pot-bellied dictator, Kim Jong-un? What a squalid-looking place. Oh, they just can’t… Greetings and welcome, my friends. It’s great to have you. Rush Limbaugh, and we kick off yet another brand-new week of broadcast excellence, an abbreviated week of broadcast excellence. It’s the Independence Day weekend on July 4th. 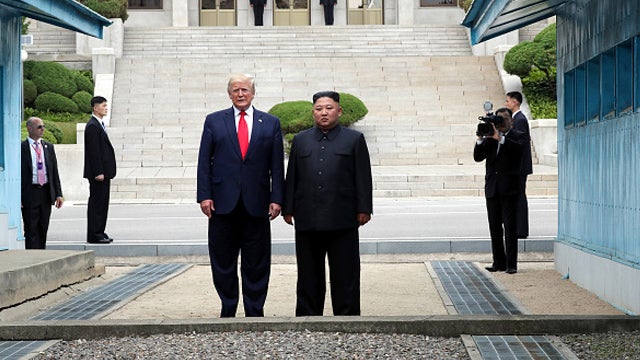 You know what? Trump wants some tanks on the street in Washington on the Fourth of July. That’s… (laughing) They’re gonna say, “That’s ’cause of Kim Jong-un! That’s what he would do, or what some of the old Soviet leaders would do.” They’re gonna just have a cow over it, and they’re having a cow over Trump meeting Kim, that it was impromptu. (impression) “This is not how diplomacy is done! Trump is an idiot, doesn’t know what he’s doing. We’re all at greater risk.” It’s just stunning. What we’re looking at is something that we have seen since Trump entered the political scene in 2015.

It’s exactly what pushing back against decades of so-called normalcy in Washington looks like. And of course, the people who have been in charge of that normalcy just can’t stomach this. They can’t come to grips. They can’t factor it, they can’t digest it, and they continue to have conniption fits over this, and it’s just entertaining as it can be to watch.

RUSH: Okay. Here we go, folks. A montage of Democrats and the Drive-Bys joining together in unison to criticize and deride Trump’s historic step into North Korea as, “Just a photo-op. Another example of Trump cozying up to authoritarian dictators.” Of all the things to accuse Trump of doing! These people? These people will cozy up to Hugo Chavez, cozy up to Che Guevara and Fidel Castro and the Soviet Union? (chuckling) They claim Trump is cozying up? (chuckles) They’re so intellectually bereft. If we could just… If we could just add another 10 points to the average IQ, it would finish these people.

Anyway, here is the sound bite…

TIM RYAN: The President Trump Appeasement Tour. I have no idea why he’s shaking hands with a dictator. 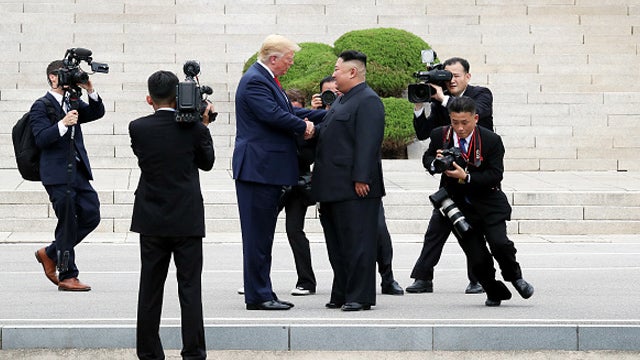 MARIA CARDONA: …cozy up to dictators, to authoritarian rulers, to despots.

JEREMY BASH: This is symbolism over substance! They’re only delivering us photo ops.

NIC ROBERTSON: What’s the president going to get out of it other than a photo op?

ABBY PHILLIP: A photo op, a handshake. Nothing real!

YVETTE SIMPSON: A photo-op with Kim Jong-un. You’re coddling up to our enemies, these dictators, these authoritarian regimes.

CHUCK TODD: …the undercurrent of this entire trip, meeting with authoritarian figures.

JOY REID: … authoritarian Donald Trump was sucking up to.

JASON REZAIAN: …looking for allies in the leaders of authoritarian nations.

BERNIE SANDERS: You have a president who seems to love authoritarian people.

MADELEINE ALBRIGHT: President Trump finds more solace in meeting with authoritarian leaders and making fun of and insulting our friends.

RUSH: That’s Madam Albright there. She’s part of the group that was demanding we always talk to these people! “We gotta talk to ’em!” They got mad at Reagan for not talking to the Russians, they got mad at Reagan for not scheduling a summit. They got mad although Bush for not talking to the leaders. They get mad at all of us. They go talk to them, and guess what? Kim Jong-un and his dad get nukes. The Iranians get nukes. You talk about cozying up to authoritarian dictators, how about Barack Hussein Obama? Here’s a flashback for you of the Drive-Bys going nuts more Obama stepping foot in Cuba. 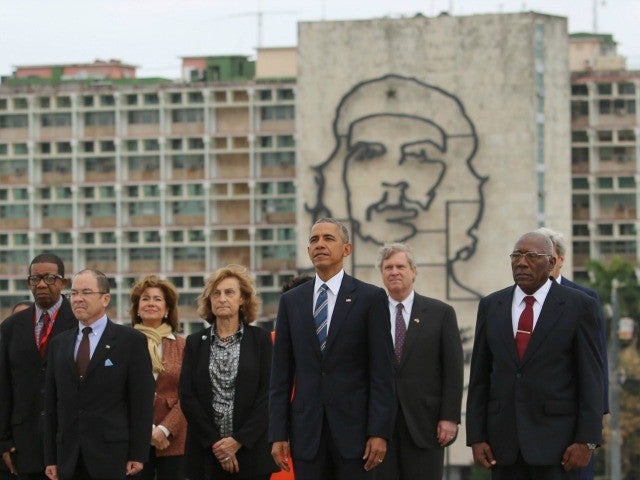 ERIC SHAWN: See that airplane? It’s Air Force One, and it’s been on a journey that’s taken 90 years!

DAVID MUIR: (outdoor noise) History has just been made. President Obama touching down; Air Force One landing here in Havana.

NORAH O’DONNELL: (whispering) The first sitting American president to set foot on the island in 88 years!

LISANDRO PEREZ: (outdoor noise) I never thought I would really live to see this day!

FREDO CUOMO: (rain noise) …to have the American president on Cuban soil. The implications are deep and yet unknown.

RUSH: Is that not amazing, folks? Is that not flat-out amazing? Obama was cuddling up to authoritarian regime! He was making deals with ’em — on their terms! It was wonderful; it was historic; it was great. All the media got to go to Cuba. “Trump is simply seeking a photo-op. He’s just dangerously playing with a dangerous for a photo-op. He doesn’t know what he’s doing!” I say, another 10 points average IQ increase across the population of this country we could be done with these people as a dominant force.

CALLER: Hey, Rush. Listen, the JSA, Joint Security Area, where President Trump appeared is not shabby by any means. It’s probably cleaner than any Major League Baseball park, frankly, before the first pitch. I spent a lot of time up there as company commander. I had three platoons of military police up there, and it’s seen a lot of changes, but it’s far from shabby. And what the president did yesterday was… I guess it’s yesterday. It’s 13 hours difference now. Who knows? But I don’t know how he physically does it but the point being —

RUSH: Well, he’s cozying up to an authoritarian dictator. You heard ’em.

CALLER: Yeah, right, and it’s a smart thing he’s doing, frankly. And it’s been long in coming. No doubt about it, it has to happen. What Kim Jong-un has to deal with is his generals. That’s the biggest thing. He needs to figure out how he’s gonna tell the generals that, hey, they’re not gonna have all their power anymore — and that is a big problem for him.

CALLER: Well, yeah. Because he lives in the whole lineage of that entire family all the back to his grandfather.

RUSH: No, no, no. Don’t be confused. My point about Kim Jong-un not having a father, is he’s a relatively young guy. Our caller said he’s surrounded by a bunch of 70-year-old generals. Do generals…? Are they allowed to live that long in North Korea or can anybody live to their seventies there? Anyway, he is surrounded by a bunch of people that are two and three times older than he is (well, at least two times older) and we don’t know what kind of pressures the guy is under, generationally and so forth.

Now, the conventional wisdom is that he is totally, brutal, deadly, militant, assassinates/executes anybody who opposes him, and that’s probably true. But my point is, what have you…? (whispering) And I’m throwing this out there. You just to very careful who you tell this to. What if Donald Trump is becoming a father figure to Kim Jong-un? (interruption) Ah, I see some curious facial expressions on the other side of the class. It’s just a what-if. It’s all it is. It’s just wild speculation, just a what if, and I don’t even know the answer to what-if, if that’s true. 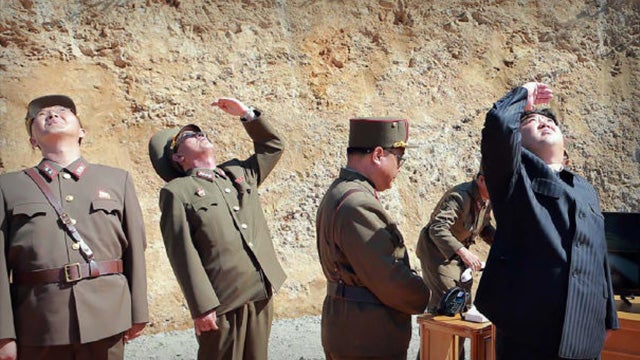 But the one thing that I have learned over many years, not just since Trump has been around the political scene, is don’t bet against him. Whatever his motivations are, however it is that he’s trying to cultivate Kim Jong-un, don’t bet against him — and these Democrats simply can’t learn that. It is stunning. It’s amazing how they fall into every trap. They fall into every one! “Aw, here he is sucking up to an authoritarian dictator!” As if they don’t! That’s the definition of being a Democrat today, and it has been for 40 years.

They have sighted with the Sandinista regime in Nicaragua. They sided with a communist outpost in Grenada, not to mention the Soviet Union, not to mention Hugo Chavez. If anybody, they sided up… I mean, you couldn’t tell the difference in the Democrats campaigning in 2004 and the Iranians commenting on George W. Bush! They sounded identical. So anybody out there that hates a Republican or Republican president is a friend of the Democrats, even if they are an enemy of the United States. This is not an exaggeration. It is actually true.

They keep falling for this trap.