Eric Swalwell Bows Out of the Race

RUSH: Eric Swalwell will hold a press conference this afternoon to announce that he’s dropping out of the Democrat primary race. He was never in it! He just did it to get some quick money. He shows up for one debate, tries out a couple of liners, tries out a couple things about carrying a torch, new generation, see how it flies. Went nowhere, is getting out. Never got into it to win in the first place. In fact, there are a lot of Democrats in this race probably not in it to win. They’re probably in it to arrange money. 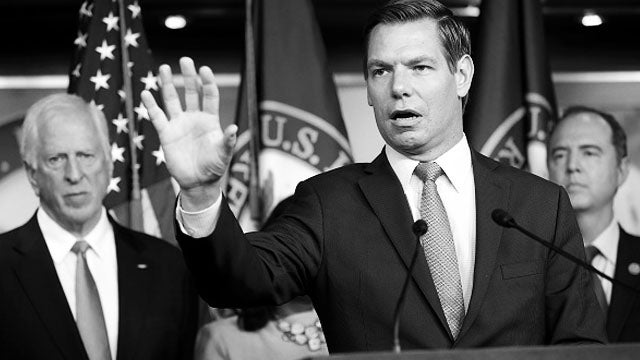 I’ll tell you whose showing is surprising people — and it’s none of the ones you would think — it’s that Marianne Williamson hasn’t been dispatched yet, you know, the hippie babe from the seventies, love conquers all, get rid of everything but love and so forth. Got some people curious, you know, where does that fit in the Democrat Party. Well, it fits in a previous era of the Democrat Party, although not now.

This is Dan in Lansing, Michigan, as we head back to the phones. Great to have you. Hello.

CALLER: Hey, I just wanted to say that it’s nice to have warm sunshine here in Michigan in this free land that we have. My mom and dad, dad was a World War II vet in the Navy and my mom was one of the Rosie’s Riveters and they’re still alive. As a Gold Star father, I learned from my parents what the word “winning” really meant.

RUSH: Okay. You learned from your parents what the word — what does it really mean?

CALLER: Well, it’s how I grew up, Rush. You know, the fact is is that, you know, we talk about all these politicians and the hypocrisy that the Democrats have is that they don’t care if we win or lose. Then why do they run? What is the purpose? Why are they trying to beat Trump, if they don’t care who wins or loses, they just want to further their agenda. And the hypocrisy of that is such that it’s just amazing.

Dad was in World War II. They won the war, it was something we cherished. Then he came home and did what he did. My brother was a Marine in Vietnam. Same thing. You know, we went over there and we wanted to win. My oldest son is in Afghanistan. So the idea of winning is not to be inhumane. It’s the fact that there’s some serious pride in this country, and being a speaker now traveling the country I’ve seen patriotism across this country that people haven’t ever seen and won’t ever be televised.

RUSH: You’re talking about winning in war. Democrats want to win, and you’re saying they talk about winning — you’re talking about war. Democrats use phrase like “imposing freedom” on people. That we have done that. The United States has imposed its way life. How do you impose freedom on people? Freedom is not an imposition. The fact is the Democrats’ aims — and this is even beyond the current era of the American left, Democrat Party.

They’ve not been upset with America losing. Look at the way they tried to secure defeat for America in the Iraq war. Anything that allows the left and the Democrat Party to point fingers at the military and to be critical of it, why, they will take that every chance they get, even if it means the United States losing a battle or losing a war. And I can tell you the generation you’re from resents the hell out of that, and it’s true. They have had that attitude about war. But they want to win as much as anybody.