RUSH: Now, I don’t want anybody to misinterpret this as criticism of Marco Rubio. Okay? Remember last week I cited a piece for you from, I think it was The Federalist, and it was a piece by David Harsanyi. He’s a great, great writer. And I asked everybody, please do not get it wrong what I’m gonna say. I am not criticizing Harsanyi. I don’t want anybody sending him notes, saying I was ripping into him today, ’cause I wasn’t.

He just wrote something that really struck me. And it’s beyond being a pet peeve. It’s a genuine concern. And that is I’m amazed at how few people in politics and on our side realize how dire the consequences we face are. Like Mona Charen and the Never Trumpers. They don’t think there’s any crisis in the country, except for Trump. They don’t think there’s any danger that the American way of life as founded is in peril.

“Ah, that’s poppycock talk. There’s nothing to be afraid of. There aren’t any crisis forces out there trying to turn our culture upside down. That’s paranoia.” They don’t see it at all. To them, Trump is the big problem. The Harsanyi piece chronicled all of the perversion and all of the absolute filth that has become of left-wing daily life and politics.

If it becomes mainstream? That’s the problem. It isn’t fringe anymore. It’s happening right now. I remember warning about it 25 years ago, 20 years ago, 15, ten years ago, now here we are. I remember trying to talk to people about abortion, just to give you an example of this, 25 years ago, I said, “If we don’t put a stop on this, all life is gonna be worth nothing. If we let it get established that life could be snuffed out for the reasons of the convenience of the living, then none of us are safe.” And they thought that was extreme, paranoia kind of talk. 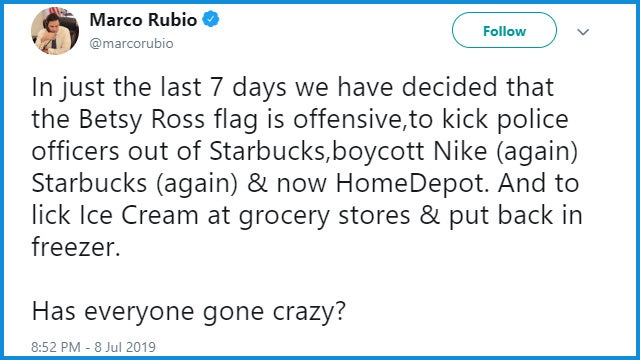 I said, “Well, you just watch. They’ve already got you and everybody else thinking it’s perfectly fine to kill as many babies a year in the womb as you want and nothing results from it, no harm done. It’s fine. The next thing they’re gonna go after are your great grandparents and your parents, they’re an unconvenience, who would want to live this way, take ’em off the life support, do whatever, just give ’em a drug.” Obama even said it. “To hell with their will to live. Give ’em a pill, make ’em comfortable.”

What’s to say that the next person that becomes undesirable isn’t treated this way? You say, “Rush, that’s paranoid.” Now look where we are. Now the Democrats are giving a standing ovation to the idea of aborting a baby up to the time of birth and, in some states, after the baby is born. We’re long past the point where this stuff’s heading our way, we gotta head it off. It’s here. It has arrived.

Well, I have a version of this in a tweet by Marco Rubio. Marco Rubio was blown away the other day when he read that there were people licking ice cream at grocery stores and then putting it back in the freezer. Have we gone crazy? What’s going on? He added to the tweet, he said: “In just the last 7 days we have decided that the Betsy Ross flag is offensive, to kick police officers out of Starbucks, boycott Nike (again) Starbucks (again) & now HomeDepot. And to lick Ice Cream at grocery stores & put back in freezer. Has everyone gone crazy?”

It hasn’t peaked yet. Meaning this perversion, wackiness, lunacy on the left. They’re gonna nominate somebody who is. They’re gonna nominate somebody that believes all of this stuff, the odds are. And if they end up nominating Bite Me, that party is gonna fall apart. It may be in the process of falling apart anyway. But the left isn’t gonna fall apart.

The left is totally crazy. They have been totally crazy for a long time. And too many people have looked at it as just a fringe minority that doesn’t pose any kind of new existential threat, and that’s just not accurate. They have been threatening and posing a threat for years. And there hasn’t been any pushback until Trump came along.

So now there’s some official pushback, and look what happened. Donald Trump wins the presidency on the basis that finally somebody sees it and wants to do something about it. And even with this we still have people who don’t see it yet or who don’t want to see it.