A Fun Time on Fox & Friends

RUSH: I appeared on Fox & Friends this morning for a wide-ranging interview. Of course, the appearance was warranted by the overwhelming success of our Stand Up for Betsy Ross T-shirt that we began to sell on Monday at the RushLimbaugh.com store with a great, great charitable tie-in to the Tunnel to Towers Foundation which raises money for victims of 9/11, some first responders, and American military personnel. Great, great, great new charity that is relatively new. And a portion of the proceeds go to that charitable foundation. 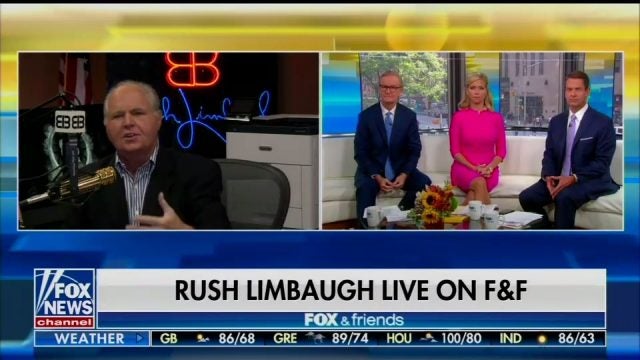 And it’s a pushback to all of this corporate and left-wing anti-Americanism out there that has really befuddled everybody. We’re not the problem in the world. We’re the solution. These people, Nike, Colin Kaepernick, now the women’s soccer team, they want to represent America. They want to be on the women’s female soccer team. They go out there and they accomplished something pretty terrific, they win the World Cup, and what do they do with the platform?

Start ripping into the country and airing all of their grievances. And people are tired of it. People are tired of hearing this country blamed by people who have become immensely wealthy, immensely successful, more so than they ever could anywhere else in the world. And what did Betsy Ross do to anybody? What in the world did Betsy Ross do to people? What in the world is warranted against pushing back against her and her creation of the first flag?

So it was a very fun time with Fox & Friends, Steve Doocy and his gang today. It was Ainsley Earhardt and Griff Jenkins was sitting in for Brian Kilmeade. They also asked me some questions about the news of the day, such as the citizenship question. Everybody thinks Trump is losing this, and he’s not. He’s winning this.

The controversy here is why did that question ever get taken off the census? But we know why. And I answered the question why on Fox & Friends.