America Continues to Stand Up for Betsy Ross

RUSH: Folks, on the Stand Up for Betsy Ross T-shirt… I don’t know how to describe this because we’re not yet ready to announce any numbers, but we’re now up to 170 knockoffs, 170, and the legal team is continually batting them down. There are 170 different websites attempting to fool people into believing that the official Stand Up for Betsy Ross T-shirt from RushLimbaugh.com is available on their website. It isn’t. It’s only available one place with the charity tie-in, Tunnel to Towers. It is only available one place.

By the way, we’re gonna be fulfilling these all week. We’re not even close. I need to beg your attention. We’re not even close. We fulfill these ourselves. We’ve got our own warehouse, and we do this in-house, and it’s gonna take us a while. There are so many. We’ve had four reorders, maybe five by now. The number of T-shirts… I’d love to give you a number, but we’re not finished yet. We’re gonna keep this going, obviously. We’ve had… I can’t give you the numbers. We’ve decided to hold back on the numbers for a while. It’s so hard to do, too, I gotta tell you. I want to yell those numbers at you, but I can’t.

RUSH: All of this is why we have continued the Stand Up for Betsy Ross T-shirt sale that is going on at RushLimbaugh.com. This is the opportunity for people to push back against all of this. Of course, it’s specifically related to people criticizing Betsy Ross and the flag, and Nike dumping the shoes because of Kaepernick. But it got energized further with Megan Rapinoe coming out after winning the World Cup, trashing the United States and trashing Trump, saying it’s not a good place, that she’s not welcome. People like her are not welcome; he doesn’t like people like her. He probably didn’t even know who she was before any of this, and certainly has never said so.

We’re up to 170 knockoffs. We’re in the process of fulfilling this massive number of orders for these shirts. We continue to manufacture, trucks continue to show up at our warehouse to restock, and we are working as hard as we can to fulfill all these orders. We have prided ourselves (in all of our previous, gigantic, big promotions) on giving same-day fulfillment. We are just racing to get this stuff fulfilled.

So be patient if you have ordered one or more of the shirts. Because of this, we’ve decided to keep it up and running. We gotta knock down the knockoffs anyway, because 170 different websites have attempted to get in on this and pass off their cheap knockoff version of our Stand Up for Betsy Ross T-shirt as a legitimate shirt that’s licensed and authorized by me. But it isn’t. There’s only one real one. There’s only one charitable tie-in, the Tunnel to Towers Foundation, and that is at RushLimbaugh.com.

RUSH: I have been asked by the president and manager of the RushLimbaugh.com store that if you log on to purchase a Stand Up for Betsy Ross T-shirt, if the size you want is said to be out of stock, it’s temporary. Come back whenever you want. We’re in the process of restocking. I’m just dying to tell you how successful this has been, but it’s not over yet. But let me give an example.

Every Super Bowl champion there’s a T-shirt made. And on average they sell 50,000 of those shirts, and it takes them three months. We are so far beyond that you would not believe it. I mean, this is a story the Drive-By Media is purposefully ignoring. 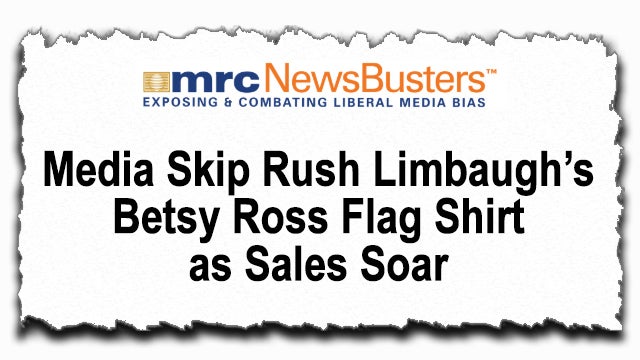 Jeff Lord at NewsBusters had a great piece on this over the weekend about how the media is ignoring the story here that represents worldwide, nationwide pushback against the left and Nike and the whole concept of dissing the flag, the media is totally ignoring this, and they will continue to ignore it. But Jeff Lord’s story was slanted to, what does this mean for electoral politics in 2020? What does it say about the Trump base, what does it say about the overall mood of the country?

I’ll tell you, wherever you look, our informal surveys here, contrary to what the Never Trumpers want you to believe and some of the Drive-By Media, there’s not nearly as much criticism and anger at Trump as they have tried to make you think there is among Trump supporters.