RUSH: I mentioned earlier that CNN convened a focus group, eight women in Dallas. They were hell-bent on finding women who were fed up with Trump, fed up with these tweets, fed up with telling these women to go back home, fix it, and come back, fed up with it. They couldn’t find one. 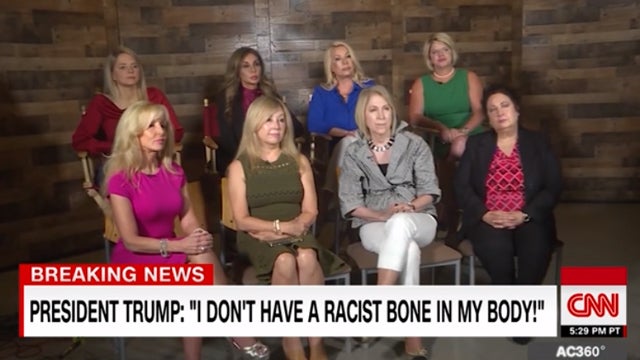 Eight different women in the CNN focus group. It was conducted by the CNN infobabe Randi Kaye. Eight Republican women from Texas. It was in Dallas. We have some sound bites to share with you. Here she is asking about Trump’s recent tweets against the four Democrat congresswomen and their response.

KAYE: How many of you don’t think what the president said was racist?

SHARON: I’m a brown-skinned woman. I am a legal immigrant. I agree with him.

KAYE: You don’t think that’s racist to say go back what you came from!

KATHLEEN: It’s a demonstration of how their ideology spills over. Even though they’re American now, so to speak, they’re not acting American.

GINA: I’m glad the president said what he said, because all they’re doing is they’re inciting hatred and division, and that’s not what our country is about.

RUSH: Go back to what I told you in the last hour. We conservatives — and these women in Dallas fit this mold — we love everybody. We hope for everybody to be happy, to achieve the American dream. We will assist and help anybody in the process, because we want a great country. We want as many great, contented, happy people as we can produce. That makes America great.

We want people to do well. We love people. All that we expect is that everybody engaging in this, love the country as well. It’s a unique place. There’s no other place like it in the world! This is not to say it doesn’t have flaws. This is not to say that it is not perfect. But those flaws and the imperfections do not condemn it! We work together to repair, to fix, to improve. Not to tear down. These women get that. 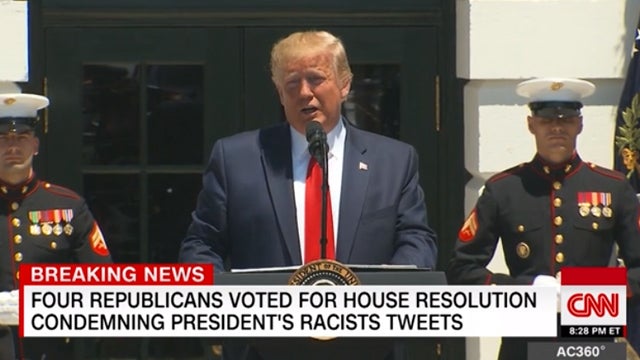 These women are simply suggesting that these malcontents ought to join us instead of participating in these efforts to divide everybody and tear the country down, because they’re the ones creating the division, not Donald Trump. I think Obama did more to divide the population of this country than Trump could ever hope to. Here is the next bite. The interviewer said, “Isn’t that what the president does with some of his own comments, his own racist comments? Isn’t he dividing people?”

GINA: He didn’t say anything about color.

CAMI: We know the president is not racist. He loves people from, you know, Hispanics to black people, all across the board.

GINA: (crosstalk) He dated a black woman for two years! Two of his wives are immigrants. He is not a xenophobic racist.

DENA: If the first black billionaire is endorsing President Trump, how can you call him racist?

RUSH: She’s talking about Bob Johnson and the Black Entertainment Network, Black Entertainment TV. These women know more about Donald Trump than this journalist does! These women know more about who Trump is and the kind of person he is than this hotshot journalist interviewing them. Finally, she asked the question: “Will you vote for Trump again?”

KAYE: These congresswomen had said they ran for Congress, ran for office because they explicitly love this country. You’re saying they hate this country?

KATHLEEN: Whoever wrote these questions up, it’s plain that they’re very manipulative to accuse instead of extracting the truth.

KAYE: Do you think it’s just a coincidence —

KAYE: — that these four congresswomen that the president is going after, none of them are white? 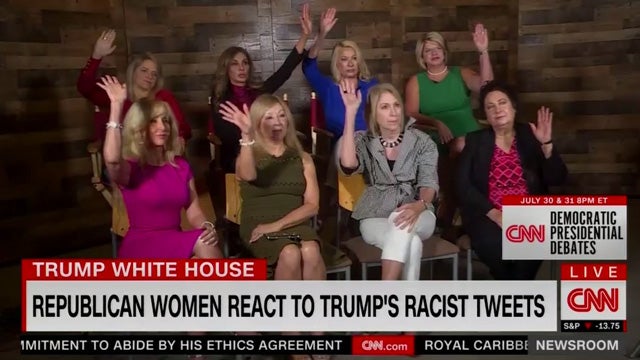 DENA: I wish that there was a white one. Why are they not racist? How come they haven’t befriended one of their white, female, congresswomen colleagues and let her join the group?

PEACHES: Because they won’t.

DENA: They don’t like white people. Come on. They’re racist.

KAYE: How many of you still plan to vote for President Trump?

WOMEN: (all raise their hands)

“I don’t think it matters. It’s idiotic, what they’re saying, so it doesn’t matter if they’re black or white.”

Female Trump voters in Dallas, TX, deny any element of racism in the President’s comments aimed at four Democratic lawmakers, all of whom are women of color. pic.twitter.com/wX3fouhHNy

“Everybody else is a victim of white guys, and we’re gonna change that.” So these four can run around — these “women of color,” as they describe themselves, can run around — and lie and distort and call anybody racist they want, any name they want, and nothing attaches to them. They’re perfectly entitled because they are minorities, and they don’t have the power to act on their racism.