RUSH: Back to Charlottesville, Virginia. Shelley, it’s great to have you on the program. Hello.

CALLER: Yeah. Shelley from Charlottesville, Virginia. I’m just wondering, Rush. I’ve been around for, oh, about five or six decades. I’ve seen a lot of politics either way, gone through a lot of presidents. I’m Republican, but I’ve had a lot of Democratic friends. Where do these crazy, super mental cases come from? I mean, it’s like they just came out of the woodwork one day and all of a sudden, all this crazy stuff starts happening. When did that happen, and where did they come from? 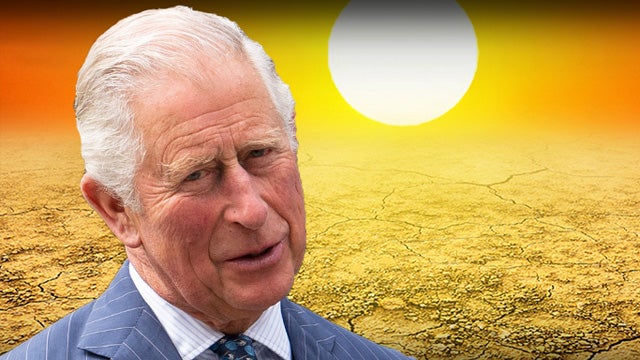 RUSH: Well, I’m actually glad you called out there, Shelley, because I myself had this reaction that you’re having within three months of Obama being inaugurated. All through the Bush years, I mean, we saw radical leftists out there, the anti-war people. But it was primarily in the media. I mean, during the Bush years, we had George W. Bush elected twice. John Kerry was a joke running in 2004, never really seriously a contender. Our problems then were that Bush was not reacting to the media — the destruction, his attempts to sabotage his regime and the wars and all this.

Then Obama gets elected, and all of a sudden it hit me the same way you just described it here. All of a sudden, it seemed like half of this country is mainstream radical left. I’m saying, “Where did these people come from? Where has this been?” I had to conclude that I knew the answer, that they had been lurking out there all along. Where they came from is the American education system, primarily. There are other avenues. Pop culture. But the American education system and the Democrat Party are primarily it.

And if I wanted to even get more specific, I could, because a lot of this radical leftism that you’re talking about tied to Millennials is culturally as well. And I think with Obama’s election, somehow it just surfaced. And I had the exact same reaction you did. For a while, I was telling myself that it can’t be mainstream. There aren’t enough. We can’t have lost this ground. We know these people have always been there, but they’ve always been considered to be a really, really small minority.

Trouble-making and loud, violent, dangerous public protests, this kind of thing. But to me it did seem like the election of Obama just brought a bunch of people out from hiding, from behind the woodwork. And then, like you, it became abundantly apparent that many of these people were young Millennials. So that, to me, has to be the education system — and I think there are probably a list of things that you could attribute to this.

I actually believe that one of the primary — one of the main issues that has led to this is the radical interpretation and presentation of climate change. I think that snuck up on us. We saw the polling data that shows it’s not important to 10% of country. Nobody was believing it. The Millennial explosion after Obama’s inauguration featured a lot of radical liberalism. But climate change, I think, was one of the primary educational tools for indoctrination that was being used.

Look, it goes back even to Ted Turner’s Saturday morning cartoon show called Captain Planet, a superhero trying to destroy all corporations because they’re destroying the planet. And in anticipation of this subject coming up today, I have two stories here. One of them… You know, Prince Charles is a loon. Prince Charles has gotta be… He’s a nice guy, does a lot for charity. I understand. But the guy is a loon — and you would be, too, if you were born to be the future king and here you are 75 and your mother has no intention of getting out of the way and handing it to you.

If you may die before you become king, you’d have to do something to make your life meaningful too. I mean, imagine the last 50 years thinking you’re gonna be king and now the last five thinking, “(Snort!) By the time I’m king, I won’t even know I’m king. They’re gonna be put me in a home.” Well, Prince Charles has always been one of these guys that thinks climate change is going to destroy us, and one year he will say, “We’ve got two years.” 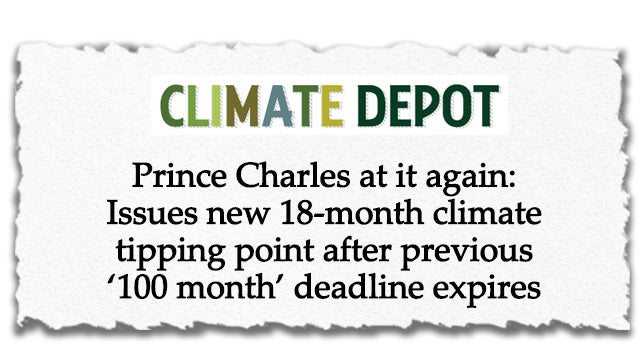 Well, now he’s back. “The Prince of Wales has warned global leaders that if we don’t tackle climate change in 18 months the human race will go extinct in a speech in London yesterday to foreign ministers from the Commonwealth. ‘I am firmly of the view that the next 18 months will decide our ability to keep climate change to survivable levels and to restore nature to the equilibrium we need for our survival,’ Prince Charles said.” In 2015, Prince Charles gave the world 35 years. Alexandria Ocasio-Cortez says, “We have 12 years,” but then when people actually acted on that, she said, “Well, you know, it’s a generality. It’s a ballpark.”

How many times in all of these recent years have we been told we got 10 years, we’ve got 12 years, we’ve got five years, we’ve got 50 years. We don’t have any time. We’re beyond our ability to do anything about it. These people are all over the ballpark. Now Prince Charles, in an official speech, 18 months. The scary thing is, I can show you mass numbers of Millennials who believe it!

Takes me to my second story. There are actually three. This is the Boston Herald, an editorial yesterday. “Carbon emissions are soon to become the latest portal the state uses to reach the wallets of Massachusetts taxpayers. A bill is gaining momentum on Beacon Hill that would place a fee on carbon emissions produced by fossil fuels. 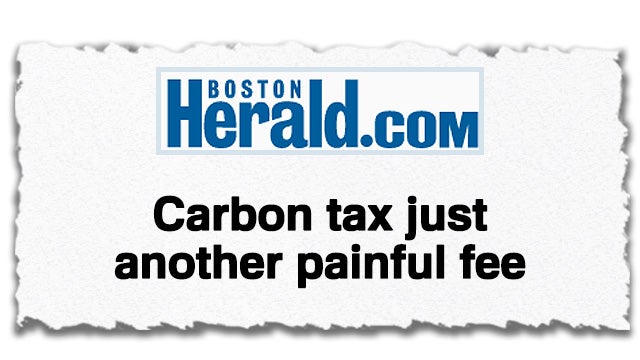 “Executive Director Michael Green of Climate XChange, a non-profit,” of course, “with a mission to fight climate change, countered that the study doesn’t include the cost of ‘climate inaction.’ In other words, doing a dumb thing is still better than doing nothing and those are absolutely our only two choices. You either want a carbon tax, straw ban, water bottle ban and Styrofoam ban or you are a climate denier.”

If you don’t agree with banning plastic straws, if you don’t agree with banning plastic water bottles or Styrofoam, you are a climate denier. “Furthermore, since climate change is purportedly the new World War II, if you are not all in you are allied with the Axis forces.” You are a Nazi and a denier at the same time. The Boston heralded is editorializing against the carbon tax. And, see, I think people are tired of being bullied.

The third story is the piece de resistance. It ran in Vice, a website called Vice. “’Climate Despair’ Is Making People Give Up on Life.”

It’s a piece — and folks, there’s no doubt that this is true. There are a few people who are getting suicidal and despondent over this. This is what the left has been doing to Millennials and young people for 20 years on this, or longer.

“In the summer of 2015 it was the literal heat that got to Meg Ruttan Walker, a 37-year-old former teacher in Kitchener, Ontario. ‘I think my anxiety just reached a peak,’ Ruttan Walker continued. It felt like there was nowhere to go, and although she had spoken to her primary care doctor about anxiety, she hadn’t sought help with her mental health. Suddenly, she was contemplating self-harm. ‘Though I don’t think I would have hurt myself, I didn’t know how to live with the fear of… the apocalypse. My son was home with me and I had to call my friend over to watch him because I couldn’t even look at him without breaking down.’ She eventually checked herself into an overnight mental health facility.

“Many people are suffering from what could be called ‘climate despair,’ a sense that climate change is an unstoppable force that will render humanity extinct and renders life in the meantime futile. As David Wallace-Wells noted in his 2019 bestseller The Uninhabitable Earth, ‘For most who perceive an already unfolding climate crisis and intuit a more complete metamorphosis of the world to come, the vision is a bleak one, often pieced together from perennial eschatological imagery inherited from existing apocalyptic texts like the Book of Revelation.’ 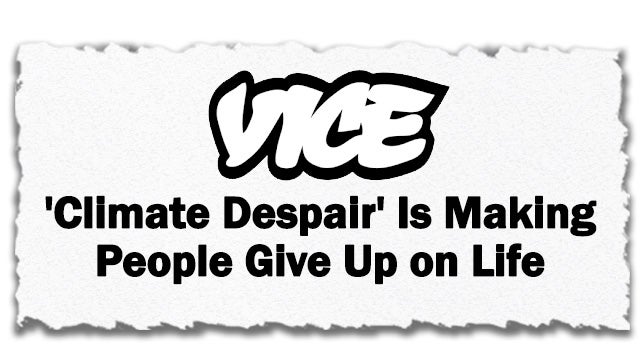 “’Climate despair’ has been a phrase used at least as far back as Eric Pooley’s 2010 book, The Climate War: True Believers, Power Brokers, and the Fight to Save the Earth, but it’s been in wide circulation for perhaps as little as two years.

“Whatever you call it, this is undeniably a real condition, if not one with a set of formal diagnostic criteria. (It may reach that status—it took decades for ‘burnout’ to be declared an official ‘occupational phenomenon’ by the World Health Organization.) It’s impossible to know how many people like Ruttan Walker have experienced climate despair as a mental health crisis, but despair is all around us: in our own momentary but intense reactions to the latest bit of climate news.”

It isn’t a health crisis, but despair is all around us “in pitch-black memes and jokes about human extinction, even in works of philosophy and literature. There is now a fringe group of scientists and writers who not only take our imminent doom as an article of faith, but seem to welcome it. … Climate despair goes far beyond a reasonable concern that a warming planet will make life more difficult and force humanity to make hard choices.”

Anyway, it goes on and it gets worse. It cites a 16-year-old tattooed, nose ringed teenager as one of the leading authorities on protesting all who are creating climate change. Makes a hero out of her in this story. Her name is Greta Thunberg, “16-year-old Swedish climate activist who led the recent worldwide school strikes, said in her 2018 TED Talk that knowing about climate change was hell on her young psyche. When I was 11 I became ill. I fell into depression. I stopped talking and I stopped eating. In two months, I lost about 10 kilos of weight.” She would later be told she had Asperger’s, OCD, and was selectively mute. Then she came out of her despair, and found a voice when she decided to strike — refusing to go to school until the world demonstrated that it’s getting its [crap] together.” Only they don’t say crap in this story.

Folks, this bunch of leftists has literally destroyed the mental health of … I’m afraid to guess how many millions of young people have been driven to serious mental illness because of this bogus, fallacious, absurd, ridiculous — It’s not helped when Prince Charles comes out and says we’ve only got 18 months or humanity goes extinct! They say Trump’s a nut?