The Trust-Fund Kid Behind AOC’s Squad

RUSH: There is one guy behind these four Squad members, and his name is Chakrabarti. He is a trust-fund kid. Saikat Chakrabart. He’s Cortez’s chief of staff. He’s a trust-fund kid; he’s using his parents’ money to fund her campaign and all of these operations. He’s the guy that’s directing them. When you heard Pelosi say, “I don’t talk to staff, I don’t,” it was him she was referring to. 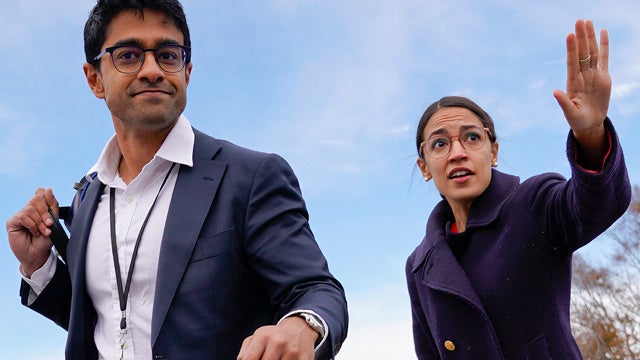 Because this guy’s been tweeting massive disrespect about her in the attempt here to elevate “the four whack jobs,” as John Kennedy from Louisiana has described them. So this Gang of Four (if you want to call them that) got their money from AOC’s sugar daddy, her chief of staff, Saikat Chakrabarti. Chakrabarti is his name. He owns them. One of his front groups is called Brand New Congress. His plan is to replace everybody in Congress who’s not an uber-radical with an uber-radical. That includes Pelosi.

It starts with Pelosi, getting rid of her.

This is the guy running these women. Not to say they don’t have their own brains. Don’t misunderstand. But he’s the money behind it. He’s the sugar daddy. He’s a trust-fund kid in his thirties, and he’s the energetic, inspirational leader behind Alexandria Ocasio-Cortez and this other bunch of freshmen. He sets the policy for the Squad. He’s the one that created the Green New Deal. He’s the one (I told you earlier this week) that when he was talking to some climatistas about it, he admitted (summarized):

“The Green New Deal? We didn’t start that out as a climate thing. We started this as a means of reversing and overthrowing the economy. It’s an economic idea.” Thereby admitting what all of climate change is! He writes their speeches. They are his minions. He controls the money. By the way, she’s gonna be primaried.