RUSH: I want to go back to this program, sound bite number 1.  You’ve gotta listen to this.  This is me on this program on Monday talking about Trump’s effort to make The Squad the face of the Democrat Party.  Listen… 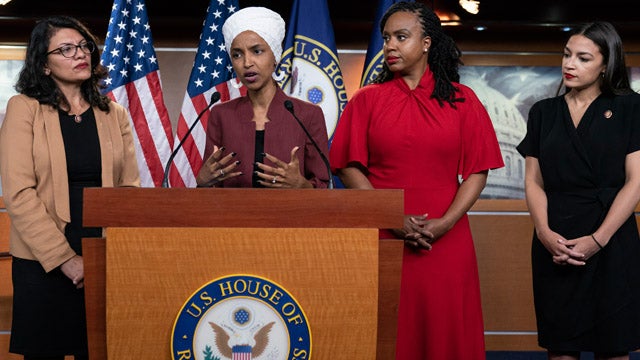 RUSH ARCHIVE:  He wants Pelosi to be forced to accommodate these people. He wants them to become the face of the Democrat Party, and he’s gonna force Pelosi to take action diminishing them, relegating them outsiders. She’s gotta do something or else let this happen. The worst thing in the world… Remember this Axios story with the poll from the polling unit that doesn’t want anybody to know who they are. In an internal Democrat poll, she’s at 9% approval and Cortez at 22% approval among swing voters. Neither of these people are liked. They are not approved of. Socialism is roundly disapproved in this poll. Trump obviously is attempting to have these people become the face of the Democrat Party. It’s a brilliant political move, what he’s doing here…

RUSH:  That was me on Monday, and, remember, all of the Washington intelligentsia said, “No, Trump’s not that smart.  This is too clever by half.  Trump can’t conceive of something like this.  This isn’t gonna work!”  “These people are making themselves the biggest victims of the country, and that’s always gonna work,” another guy said.

“You achieve grievance/victim status, and you’re golden in America.”  Okay.  Fine.  So nobody wanted to pay any attention.  That was Monday.  Jake Tapper, CNN, released a series of tweets yesterday, a bunch of nameless, anonymous Democrats are scared to death, and they told him about it with the proviso he wouldn’t use their names.  They’re scared to death that Trump is winning on this.  They’re scared to death that Ilhan Omar and The Squad are becoming the face of the Democrat Party.  Here’s Jake Tapper last night on CNN describing this…

TAPPER:  One House Democrat told me, speaking on condition of anonymity, that what Trump has done is brilliant, that he’s won this one, because what he’s gotten them to do, what he’s established is — first of all — now The Squad is the face of the Democratic Party instead of Nancy Pelosi.  And also that Nancy Pelosi had gotten all her lieutenants on board to try to marginalize The Squad. And then he did this racist tweet, and now she’s had to do a 180 and defend ’em. And people — a lot of people — don’t like what they stand for.  A lot of Democrats don’t like what they stand for. 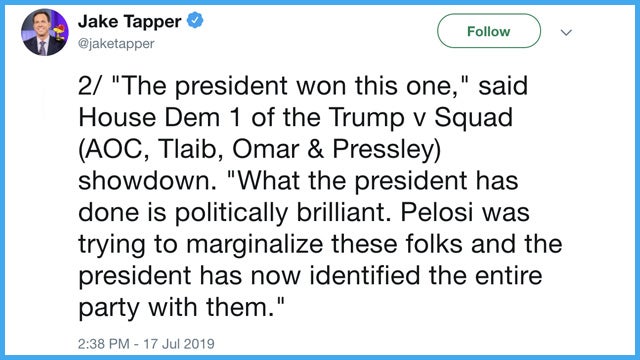 RUSH:  Ah, yes.  So privately, one Democrat talking to another — a Democrat talking to Jake Tapper — is admitting it, but not with the guts to have their names used.  And that’s just one.  Another one.  “The president won this,” said House Democrat number 1 of the Trump-versus-Squad showdown.  “What the president’s done is politically brilliant.  Pelosi was trying to marginalize these people.  The president has now identified the entire party with them.”  Other House Democrats are conflicted about having to defend The Squad, given things they’ve said and done.

This is another Jake Tapper tweet here. “House Democrats cited talk of supporting challengers to incumbent Democrats in primaries, AOC’s use of the term ‘concentration camps,’ anti-Semitic comments by Tlaib and Omar.” Privately, Democrats are bugged as they can be over this, and they’re uncomfortable having to defend it, and they think Trump has succeeded in converting these four members of The Squad to become the face of the Democrat Party. This is various congressional Democrats speaking Jake Tapper, and there’s like four or five more here on the next page.

RUSH: Now, before we go to the phones here and before I finish with some of these Jake Tapper tweets… Maybe I ought to finish with these, because Jake Tapper sent out a truckload of tweets last night from Democrats acknowledging that Trump has won this, that he has succeeded in focusing attention on these four malcontents as the face of the Democrat Party, exactly what he set out to do.  And the Democrats are admitting it in private and anonymously with Jake Tapper with the assurance that he will not mention their names.

“Other House Democrats…” I’m just reading Tapper tweets here. “Other House Democrats are conflicted about having to defend The Squad given things they’ve said and done.” “This perceived selective outrage rankled some Dems. ‘Everybody was completely outraged by what the president said,’ said House Dem 3, ‘and everybody thought it was appropriate to criticize him but this was the *first* time the House has taken action to criticize him in any way, We couldn’t even bring ourselves to have a resolution exclusively condemning anti-Semitism uttered by one of those members,'” but we dump on Trump?  “‘[W]e leapt to their defense here.'” 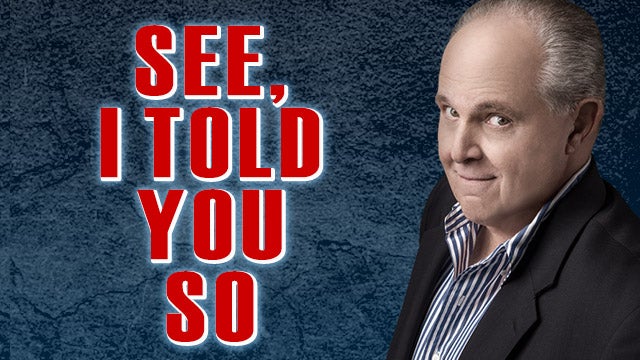 He said (summarized), Trump is maneuvering us brilliantly.  We’re out condemning him for things he hasn’t said and we’re giving our own anti-Semites a pass in our own caucus, we’re running to defend our own anti-Semites?  “A few House Dems noted that Omar and Tlaib just introduced a resolution affirming the right of Americans to boycott, perceived as an expression of support for the anti-Israel BDS (boycott, divest, and sanction) movement that most House Dems oppose.” Now, stay tuned for further information on BDS and what it is and why it is (Snort!) horrible for the Democrat Party to be seen as supporting this.

So House Democrat 3 said to Tapper, “So we’ll hear a [tirade] of attacks to Israel from this same bunch.  Hopefully this won’t be anti-Semitic this time.”  “House Dem 4 also brought up that bill coming ‘from someone with a history of anti-Semitism’ — Omar — ‘So yeah it’s challenging,'” dealing with these people. “Others noted that this week the House Democratic Caucus stood by a group that is not perceived as standing by them. ‘I can’t tell you the number of Members who are angry and annoyed about them criticizing us,’ said House Dem 3.”

This is The Squad criticizing Pelosi. And the way these women are setting it up, they’re setting it up just like Obama did. “You can’t criticize us!  We are ‘women of color.’  You cannot criticize us.  Any criticism of us is an attack on our minority status,” and they’re saying this to Pelosi and other Democrats as well as to the Republicans.