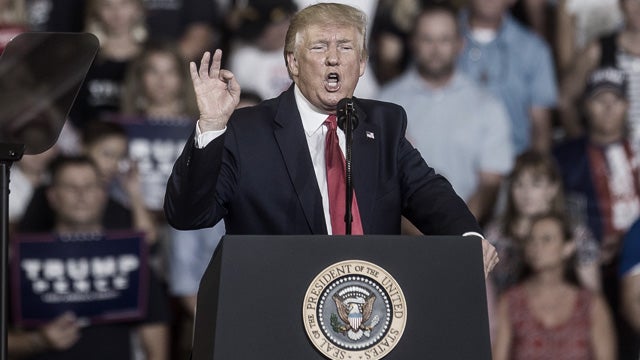 Well, I called the Trump strategy on Monday as trying to make The Squad the face of the Democrat Party, and that means as socialists and radicals and so forth, and… (interruption) Mmm-hmmm. (interruption) Well… (laughing) So the Official Program Observer says to me, “When is the last day that one of the Democrat presidential candidates has been in the news?  I mean, in the news for having done something in the campaign or said something?”  Well, it’s a good question.  I did see excerpts of… I guess it was a town hall.

It was very… It was so sycophantic.  It was some woman interviewing Kamala Harris on CNN.  It was like they’re almost afraid to ask her questions.  “Forgive me for asking, but Medicare for all?”  “(Snort!) Well, everybody wants it, and we can’t afford not to do it.” (sputtering) “Okay.  I really appreciate you letting me ask that.  Uh, uh… W-w-what about health care for illegals?  I — I heard you say that if…” “Don’t lump me in with everybody on that! How dare you ask me that, by the way.

“What gives you the right to ask me a challenging question? Where am I? We’re on CNN! Who are you?”  “Sorry! Sorry! (sputtering) I didn’t… I — I — I have to… You know, I have to ask some of these questions.”  “Well, not to me you don’t.  Ask them of Bernie Sanders, but not me. I’m Kamala Harris! I don’t get this kind of question.” I saw that.  But you’re right.  I haven’t seen a Democrat candidate… Bernie’s in the news. He’s ticked off about something.  He’s being treated unfairly.  The news about the Democrat…

I’ll tell you what the news is.  The news is about them in terms of how they’re all faring in the polls, but they themselves are not making any news.  The people making news on the Democrat side is The Squad.  Ilhan Omar, Alexandria Ocasio-Cortez, Rashida Tlaib and Aryanna Pressley — or Ayan, whatever, Pressley, whatever her name is — the four of The Squad.  And they’re not making news in favorable ways.