I Condemn Myself for My Hot Fox & Friends Appearance

RUSH: To the audio sound bites. I was on fire on Fox & Friends today, so much so that, as I say, I apologized to them if I was too hot for morning TV. There are ways to describe good TV, bad TV. TV is a medium where you’re supposed to be cool, meaning you’re not — bright lights. You’re not supposed to raise your voice, not supposed to gesticulate a lot. TV’s a cool — you can’t come in, for example, you can’t start yelling on TV because people are watching you in their homes. You wouldn’t go into their homes and start yelling.

Well, I got a little animated out there today and so I apologized and asked them if it was too hot. They said, “No, no, no! You’re not anywhere near too hot. Keep it going.” So, anyway, Bill Hemmer later in the day on Fox grabbed a sound bite of me from my appearance and asked his panel to react to it. And here’s the start. 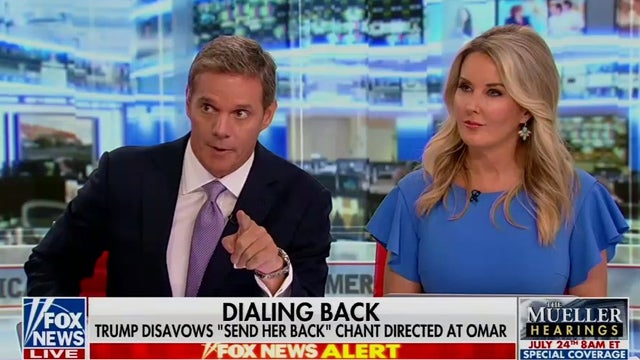 RUSH ARCHIVE: People are fed up, I think, hearing how rotten their country is. And they’re fed up hearing the media give those people an additional platform to broadcast their hate and their disgust with the country. So I think what happened at that rally is a combination of people having fun, they’re with a president they love, it’s a takeoff on “lock her up.”

RUSH: And that was Hillary Clinton, “lock her up.” Now on to the panel, first up, James Freeman, who is the assistant editor, the editorial page of the Wall Street Journal.

FREEMAN: I would like the president to set a different tone, but I think it should be pointed out here that one of the reasons there is this focus on Congresswoman Omar is the comments from her about the United States, about our troops. I think that is the root of this controversy, but obviously it should be addressed in different ways than we heard at that rally and the president has been expressing. 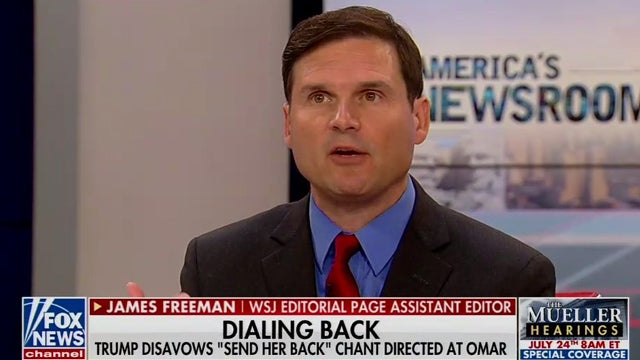 RUSH: So basically, yeah, Limbaugh’s right, but we wish Trump wouldn’t do that. We wish Trump would condemn the chants when they start. They make us nervous. It’s not presidential. So everybody’s gotta go on record disavowing the chants but supporting what they mean and why they’re happening. Oh, yeah. We gotta disavow the chants. We gotta condemn the president. The president needs to set a higher tone. But we can, at the same time, say we understand it.

And I cannot tell you how frustrating this is to me. I addressed it a little bit yesterday. There are days when it actually makes me mad, the fear people have over what the media’s gonna say. “See, Rush, they’re gonna cast us as bigots and those people make us look like bigots.” No. We’re not bigots. We’re not racists. We’re none of these things, and your defensive attitude about it is what makes people think that we are! Gotta learn to laugh along with this stuff instead of being so damn scared and defensive — and it’s of the media! This fear is of the media!

“Well, Rush, the media can make and destroy people.” Well, I guess. You know, they’ve tried to destroy me, and they haven’t succeeded, and they’ve tried to destroy Trump and they haven’t succeeded. “Well, Rush they’ve done some damage to Trump.” Of course, but being afraid of ’em is not getting anybody anywhere. You never placate ’em. You can never satisfy ’em.

Here’s Jenna Ellis Rives. She’s on the Trump 2020 advisory board. This is her weighing in. 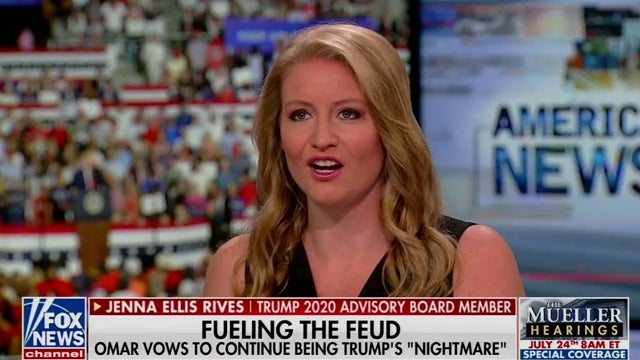 RIVES: I think that Rush Limbaugh is right, that the American people are so tired of this, because we love our country, we love what it stands for, and we love the fact that our government is there to preserve and protect our God-given rights rather than having someone who has taken advantage of the American dream and then just completely spits all over it.

RUSH: Amen. But they had a different treatment over at CNN. Moments ago, Inside Politics’ John King on CNN setting up and playing a clip of me from this morning’s Fox & Friends.

KING: Some Republicans tell the president: “At least dial back the rhetoric, focus on the policy, talk about the Green New Deal, talk about socialism, talk about what Omar has said, offensive words about Israel.” Rush Limbaugh telling the president, “You’re on to something. Keep going.”

RUSH ARCHIVE: So I think what happened at that rally is a combination of people having fun, they’re with a president they love, it’s a takeoff on “lock her up,” Hillary Clinton. I hope they continue to illustrate how wacko, how morally bankrupt and substantively bankrupt they are. That’s why I hope Omar keeps talking. I hope Alexandria Ocasio-Cortez, I hope they keep talking. I hope that Trump continues to succeed in making all of these people the face of the Democrat Party. That’d be great.

KING: Do Republicans hope an old white guy keeps mocking the accent of a Latino member of Congress?

RUSH: You hear that? That’s his reaction to the sound bite, that I am mocking the accent of a Latino member of Congress by pronouncing her name, Alexandria Ocasio-Cortez. That’s his whole reaction. Now, if I were your typical Republican, “Oh, my God. Oh, my God. I’m sorry, I didn’t mean it. I need to rise to a higher tone. Please forgive me. I will never say Alexandria Ocasio-Cortez ever again. I’m just trying to have fun on the radio. Please don’t think ill of me. Don’t think of me like those other white supremacists.”

That’s how I would behave if I wanted to be like everybody else reacting to this chant business.

RUSH: Now, what am I gonna condemn myself for? Well, I just played the sound bite moments ago, John King at CNN played a sound bite of me appearing on Fox & Friends today. And in that sound bite I pronounced Alexandria Ocasio-Cortez that way. And he has accused me of mocking a young woman and her Latino accent.

And so, ladies and gentlemen, I have decided I need to condemn myself for this lack of sensitivity, for this racism, for this bigotry. “I was really upset by it. Just trying to have fun. I didn’t mean anything to anybody. Alexandria Ocasio-Cortez, I’m just a guy on radio trying to be different, you know, trying to be unique. I’m just being who I am here, and now they’re calling me names and I can’t afford them to call me names so I’m gonna condemn myself. I didn’t mean anything. I’m sorry, okay? Please leave me alone.” 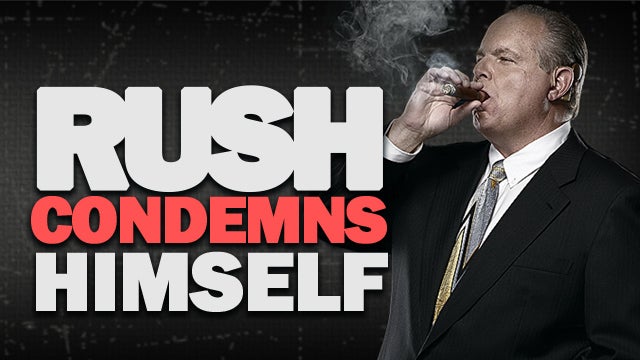 There. I’ve condemned myself. I have fixed the mistake. I have sought the goodwill of my enemies. We’ll see if it works. We’ll see if my official condemnation of me buys me any peace. Now, of course, I know that it won’t. ‘Cause I’m even joking about the condemnation. And I know you people are sophisticated enough to know that.

RUSH: So I’m on Fox & Friends today. You people weigh in on this, tell me if you think I’m wrong here. Okay? I’ll subject myself to your judgment.

So I’m on Fox & Friends today, and I’m talking about the chants, ’cause they’re asking me about it. I want to talk about the Stand Up for Betsy Ross T-shirt, which we did at the end of the segment, but they asked me about the chants and Trump and this and that, so I answered it.

And in mentioning one of the names of The Squad, Alexandria Ocasio-Cortez, I pronounced her name that way. Which I’ve already come under fire for on this program and you people have told me, “Don’t stop. Keep doing it.” Because you realize it’s in good fun! It’s not mocking anybody. But here’s John King, who must have heard it for the first time in this sound bite on CNN just about an hour and a half ago. 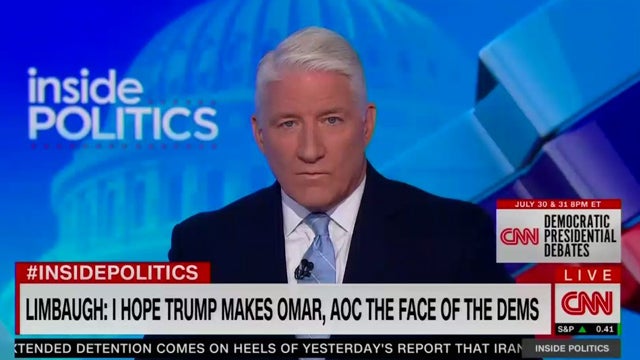 KING: Some Republicans tell the president: “At least dial back the rhetoric, focus on the policy, talk about the Green New Deal, talk about socialism, talk about what Omar has said, offensive words about Israel.” Rush Limbaugh telling the president, “You’re on to something. Keep going.”

RUSH ARCHIVE: So I think what happened at that rally is a combination of people having fun, they’re with a president they love, it’s a takeoff on “lock her up,” Hillary Clinton. I hope they continue to illustrate how wacko, how morally bankrupt and substantively bankrupt they are. That’s why I hope Omar keeps talking. I hope Alexandria Ocasio-Cortez, I hope they keep talking. I hope that Trump continues to succeed in making all of these people the face of the Democrat Party. That’d be great.

KING: Do Republicans hope an old white guy keeps mocking the accent of a Latino member of Congress?

RUSH: So now I’m an old white guy and I am mocking, I am mocking the accent of a Latino member of Congress, and he asked, “Do Republicans hope an old white guy keeps –? So next, some CNN reporter might go to members of Congress, “Did you hear Rush Limbaugh mocking Cortez?” “No, I don’t know what you’re talking about.” Here, listen to the bite. Then they play me saying Alexandria Ocasio-Cortez and the reporter, “I certainly condemn that, I think that’s way over the top. I can’t support that, oh, no, that’s embarrassing.”

That’s what they’re hoping to get. They’re hoping to get Republicans essentially condemning what I was doing. This is how it works. Because I don’t defer. I don’t beg their forgiveness and understanding. Folks, I hate to tell you, but I really do like myself and I like hearing myself speak. If you were right as often as I am, you would like hearing yourself speak too.

RUSH: The fact of the matter is, folks, in pronouncing Alexandria Ocasio-Cortez’s name the way I did, I’m actually trying to be respectful of it. That’s how it is pronounced. Not Alexandria Ocasio-Cortez, as a bunch of people would say. You go to a Mexican restaurant say, “Give me one of them enchiladas.” No. “Give me a couple them margariters.” No. I try to be respectful of people who speak differently than I do.

By the way, I am a student of speech and of the voice, and I love giving myself a workout now and then. And it’s not just Alexandria Ocasio-Cortez. Oh, we have had so much fun with Senator Kennedy over the years, and others.