Trump Keeps Getting Asked About the “Send Her Back” Chant

At some point, do you not say, “Stop this. I’ve answered this question, and you’re just trying to set me up again and again. Screw you. Next question.” How many days has this question been asked now?

RUSH: This is Tina in the Outer Banks of North Carolina. It’s great to have you. I really appreciate your patience, too. 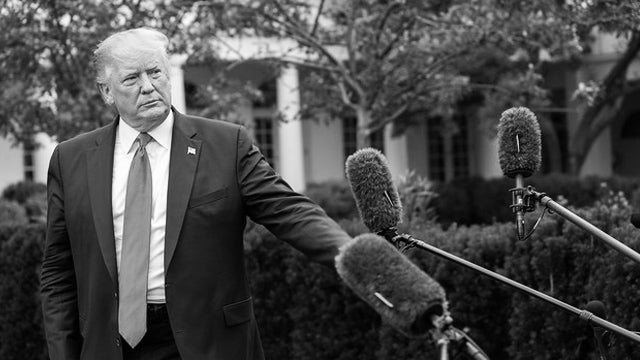 CALLER: Thank you so much for taking my call, Rush, and I want to thank you for being a great American patriot. Hey, I was down at the rally down in Greenville. The press all have it wrong, even Fox. When Trump started talking about multiple things, he only spent maybe three minutes talking about AOC and The Squad. When people started chanting, it was only… It wasn’t even a minute. Actually, it was sort of amazing to see Trump’s reaction to that. He sort of backed away from the stage and turned, and he looked actually ashamed — which I was sort of surprised, you know. Instead of the press reporting how fabulous this rally was — everybody was so positive and all the promises he’s kept — they’re just turning on this one little negative point, and I just wish they would report on the positive things of the rally.

RUSH: There’s no way they’re gonna report on the positive. They’re looking for negative the negative, and there’s one thing you can find. You know, you describe Trump’s reaction like, “I appeared a little surprised, a little irritated.” I can relate to that. You know, I’ve done my share of public speaking, and I’ve had nights where I’ve been on a roll, and I’ve had nights where I’ve thought, “Ah, I’ve not been my best,” but only I’m the one who knows it. I think Trump… Speaking of which, let me delay this comment toward the end of this one.

I noticed something in this rally I wanted to point out. But before the end of this rally, I think Trump looked at that chant as an interruption. He was on a roll. He was in the process of making a point about Omar and the rest of this Squad, this gang. And I think that that chant interrupted his rhythm. I don’t know what was in his mind when he heard the chant. I don’t know what he thought. I don’t know whether he was stacked there regretting and going, “Oh, my God. Why this?” But it did interrupt the rhythm, and nothing worse than something interrupting your rhythm.

Maybe you’re at a dinner party or you’re just with some people and you’re talking, and you happen to be really on a roll. Your making a point, and somebody stops you to ask a question, and it just kills the momentum. And you ask, “Are they not even listening to me? What’s that question got to be with what I’m talking about?” I think that kind of thing may be what had happened. But as far as the me, the media, they’re not gonna give this up. They can’t stop asking him about it. There was another press gaggle at the White House today, the Oval Office, a little photo-op celebrating the 50th anniversary of the Apollo 11 Moon landing.

So Trump lets the reporters in there, and another reporter said (impression), “You said you were unhappy the crowd in North Carolina was saying ‘send her home.'” He’s only answered this how many tens of times now. He’s only been answering this how many days in a row now? And yet they keep peppering him with the question. This is done on purpose, hoping he’ll come up with a different answer. Hoping he will say something that they can then say, “See! He’s lying.” Sort of like the way prosecutors set up a perjury trap. Anyway, here’s how Trump answered the question. 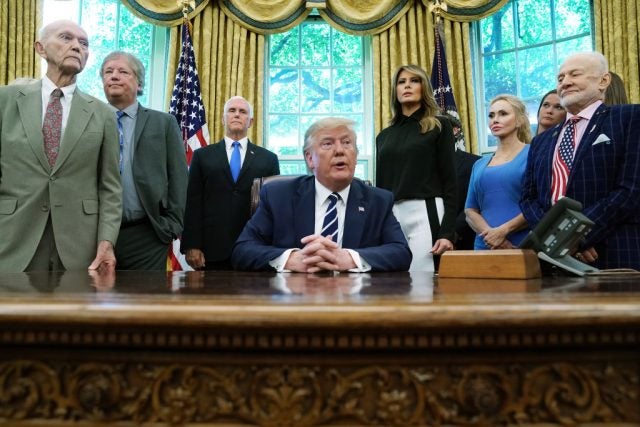 THE PRESIDENT: Those people in North Carolina… That stadium was packed. It was a record crowd — and I could have told it 10 times, as you know. Those are incredible people. Those are incredible patriots. But I’m happy when a congresswoman goes and says, “I’m gonna be the president’s nightmare.” She’s gonna be the president’s nightmare! She’s lucky to be where she is, let me tell you, and the things that she has said are a disgrace to our country.

RUSH: Now, this nightmare business, this is a reference to Ilhan Omar who flew back home to Minneapolis today or yesterday, whenever, I think was yesterday or last night. She arrived back at the airport, and they had arranged — I’m sure they arranged — a crowd of a couple hundred people to gather at her gate when she got off the plane to start cheering her, “Yay! You go, Ilhan, right on!”

And of course it was a diverse crowd, a lot of fat, old, white women in the crowd, make it look good. And a lot of men. Well, that’s what I saw, for crying out loud. Am I not allowed to talk about it that way? A bunch of fat white women were in this crowd, “You go, Ilhan, you go!” And it was done on purpose. They set the thing up to make it look like she’s got this traveling road show of fans that knew where she was landing and couldn’t wait to greet her.

Then she’s got the Al Sharpton megaphone where she’s doing a little press conference promising to continue to be a thorn in Trump’s side and promising to continue to be Trump’s nightmare. And the fat white women keep cheering over this. (interruption) Wait. You think I’m gonna have to condemn myself again? I’m insulting white people. Can’t you do that now? You can insult white people all you want! I don’t have to condemn myself for this. 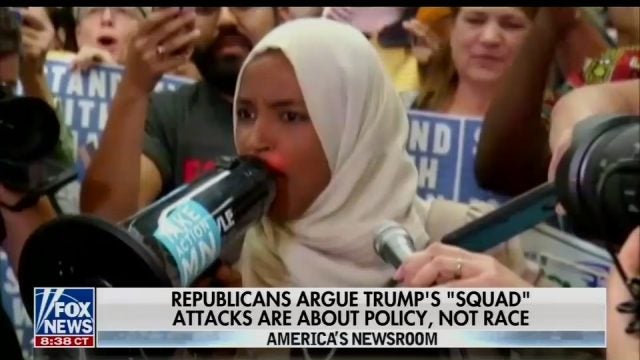 Anyway, she had her bullhorn, and she’s promising to be Trump’s nightmare and so forth. What I was gonna say about the ending of the speech — and I think, you know, Trump — I thought he was sending a message of unhappiness to his campaign staff. Because we’re now into the third year of the Trump presidency, and Make America Great Again is the past. It needs to be “We’re Gonna Keep America Great.” That close, which was on the prompter that was written, he went off prompter. He was tired of saying it because he’s been saying it for three years, and it’s no longer applicable. It’s out of time now, its outlived its usefulness in that sense.

He’s not running a campaign. He’s running a reelection. And he has made America great. He has revived America in many ways that he said he was gonna do. And yet the close, which is a standard close I’m sure they copy and pasted into the prompter, is no different than what he was saying before the presidential election. And I think he noted that and I’ll betcha we don’t hear that same series of lines in future rallies.

RUSH: The Official Program Observer just observed something during the break. He said to me, “Rush, do you think John King was righteously offended and indignant when Hillary Clinton went to Selma and said, ‘I ain’t no ways tired. I have millions of miles to walk in my shoes.’”

I said it’s a great question, because Hillary Clinton went down there and tried to impersonate the African-American Selma dialect. And nobody in the Drive-By Media thought that she was mocking or pandering or trying to suck up.

By the way, Alexandria Ocasio-Cortez doesn’t even have a Latino accent. She was born in Westchester County. She grew up in Long Island, went to school in Boston. She looks like — sometimes I think I’m watching the movie The Fly, but, I mean, she does not have a dialect. So how can I be mocking something she — ooh, there’s Blasey Ford on TV. That’s another thing. Blasey Ford is sitting there talking like a 16-year-old. Did the media call her out for affectating her voice at all? No way. All right. Good observation from the Official Program Observer. 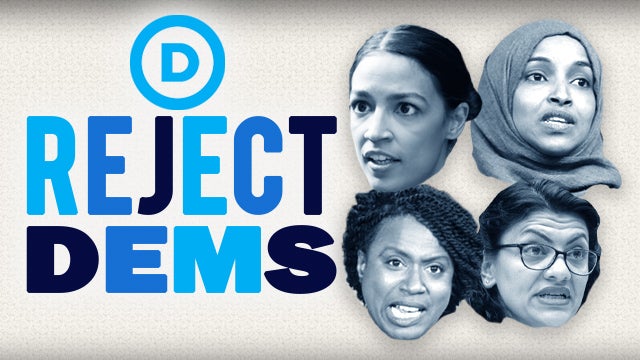 Grab sound bite number — I think it’s 8 or 9. Let me look real quick here. Oh, you gotta hear number 8, too, number 8. Gotta get these two in. Douglas Brinkley — you know, there’s a lot of sound bites of me on the roster today, but I don’t like to make the program about me. They were just talking about my Fox News appearance.

But here’s Douglas Brinkley last night, CNN Tonight with the dumbest man on TV, Don Lemon. And Lemon said to Doug Brinkley, “The border crisis, the president’s racist attacks, are these race issues reaching a boiling point now, Douglas? What do you think?”

BRINKLEY: Well, I think, you know, Donald Trump is a product of right-wing radio. He used to listen to these racist, bigoted taunts on Bob Grant’s radio show for decades in New York, things that Rush Limbaugh might say, and it’s become normal to him. He has no sense of American history, Trump, so he just does media.

RUSH: There you have Douglas Brinkley, got a different job every two years, presidential historian Tulane, then at Rice University, then the University of Hard Knocks, discotheque, wherever he can get a gig. And this is just so shallow. This is so intellectually vapid. Trump is a product of talk radio?

These guys are so jealous, folks. Here they are, distinguished presidential historians, and nobody’s listening to them because they can’t even get that right. And here, ladies and gentlemen, is, upon her arrival at the Minneapolis/St. Paul International Airport, representative Ilhan Omar with her Al Sharpton megaphone.