RUSH: More news. “2020 Democrats Are Starting to Turn Obama’s Legacy Against Biden.” This was a story from over the weekend. “The former VP has tied himself closely to the president he served. His primary opponents are trying to complicate that.” Now, this, to me, is a story that hasn’t gotten anywhere near enough attention. And the reason it isn’t is because the Democrats, the media, do not want to play this up.

But let me give you the upshot of this. Vice President Joe Bite Me “has used Barack Obama’s beloved status among Democratic voters to insulate him from criticism from the massive field of candidates jockeying to be the next president. But in recent weeks, the Democratic frontrunner has had that legacy used against him, with his competitors pointing to the shortcomings of the last Democratic administration as evidence that Biden’s not up to the task of leading the next one. ‘Barack Obama, personally, is incredibly popular among Democratic primary voters,’ Karthik Ganapathy, a progressive consultant now running his own firm, told The Daily Beast. ‘And also at the same time, there’s a growing recognition that income and wealth inequality got worse under his eight years, the climate crisis got worse during his eight years, deportations went up during his time in office.’”

Children were separated from their families during the Obama administration. I never thought I would see this. And it’s another bit of evidence that tells me just how intent the Democrat leadership and the media today is of getting rid of Biden, that they are willing now to, amongst themselves, trash Obama? Whoa.

RUSH: Yeah. It’s interesting here that the Democrats are now starting to attack Obama. The subtle targeting — and they’re doing this to get at Biden. They’re saying that Biden is not qualified because of all the things that went wrong during the Obama years. Now, you’re not seeing it in the Drive-By Media. This is internal stuff that Democrats are being sent in mailing lists, email blasts. You’re not gonna see CNN do a story on this. You’re not gonna see the New York Times do a story on it. But Democrat donors are being sent this stuff.

Barack Obama is out there fuming every day, and this stuff is not gonna help. 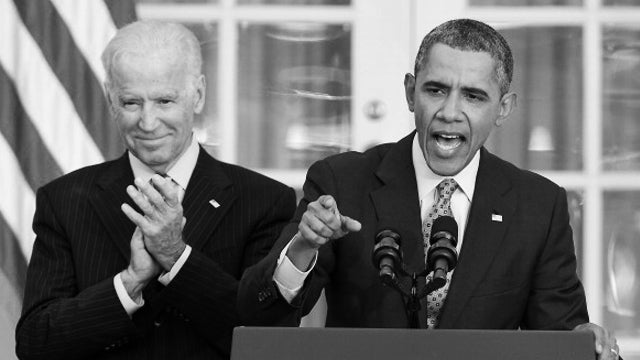 He’s fuming that Trump got elected. He’s fuming over what Trump’s doing. Trump rips Obama left and right, Obama policy left and right. He’s reversed a bunch of Obama stuff. Obamacare is on the verge of being buried, the signature deal. Now, I know everybody says, “Rush, Michelle doesn’t want to get back in there. She likes being on the cover of Vogue too much.” That wouldn’t stop! “Yeah, but she likes the high life. She gets to run around with Oprah.” That wouldn’t stop! Oprah would just have to come to her.

Who are we talking about here?