The Squad Can’t Get the President to Back Down

Do you realize for most of our lives this has been the number one political weapon and charge the Democrats have made against all of their opponents? Racist, racism, bigot. I would think by now the American people would be worn out on it. I would think by now the American people, it would go in one ear and out the other. How many times can you hear this and have it still have any kind of impact if it’s the standard, ordinary, everyday allegation the Democrats make about every opponent.

The theory, the strategery on the Republican side was: “Let it go. Let it go. This will pass. We’ll be on to some story in a couple of days. Let it go. If you respond to it, if you dignify it, it just looks like it bothers you,” blah, blah. You know the drill on this.

But Trump is, I think, really smart on this, continuing to call The Squad racist, continuing to identify them as the face of the Democrat Party, continuing to throw this charge right back at them, which doesn’t allow them to get away with it in a blanket way like they always used to. 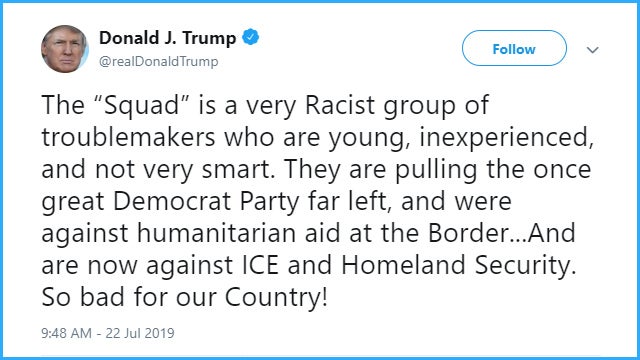 Here’s Trump’s tweet. This is from just this morning about 9:48: “The Squad is a very racist group of troublemakers who are young, inexperienced, not very smart. They are pulling the once-great Democrat Party far left. They were against humanitarian aid at the border. They’re now against ICE and Homeland Security. So bad for our country.”

The Democrat Party doesn’t do diddly-squat for them. When the Democrats run the show, African-American unemployment doesn’t change. It doesn’t get better. Lifestyles for African-Americans do not improve. But all of that has happened under the Trump presidency. And they’re paranoid about it.

In the world of reality, life for African-Americans and many other minorities is on the upswing because of the economic turnaround. The Democrats can never be responsible for an economic turnaround like this because they don’t want an economy turned around like this. They don’t want people who are able to fend for themselves, take care of themselves, and prosper themselves. They want that to all come from the perceived assistance of the party and the government.

So all of this represents a threat to a gigantic coalition the Democrats have long since taken for granted, the African-American vote. So chalking Trump up as a racist and all Republicans as racists has been a standard operating procedure from the Democrat Party playbook for as long as I have been alive. Trump is simply the first Republican to push back against it. He’s not attacking anybody.

And yet Reuters says: “U.S. President Donald Trump on Sunday stepped up his attacks on four Democratic congresswomen,” The Squad, “who have criticized his policies, calling on them to apologize as he himself faced charges of racism.” 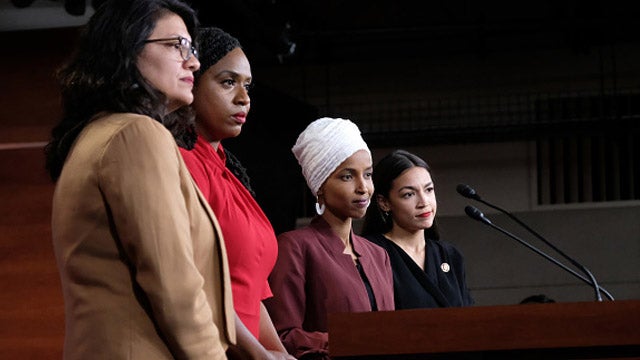 You know what? I hear people talk about how embarrassing our discourse has gotten and how uncivil it is and, gee, how guttural it is. Well, how about this. How about if the Democrat Party stops doing this? How about if they stop using this cudgel of racism as a political weapon? Particularly when the racism and the sexism that permeates our society originates mostly with them.

You can sit here and you can wring your hands over the loss of civility and how awful it is, but it’s the Democrat Party which pursues this course of action. Donald Trump never mentioned race in any of the tweets and in his public appearances and his rallies where the crowd did the chant, no mention of race, no mention of skin color. And yet this story from Reuters, like every other, ends up saying something along the lines, Trump has relied on racially divisive rhetoric.

Trump simply defends. He gets up every day, sees himself under assault, and defends. He said: “I don’t believe the four Congresswomen are capable of loving our Country. They should apologize to America (and Israel) for the horrible (hateful) things they have said.” There’s not a single racist word in any of that. There’s nothing racist about Trump pointing out that these women have said hateful things about America. The whole Democrat Party does! The whole Democrat Party is being built on hatred for America. There’s no mystery to this. They’re open about it. They’re trying to build a coalition of minorities rooted in resentment and hatred of America.

For crying out loud, folks, if you have to go to the Moon landing to charge racism and inequality, how desperate must you be? When Cory Booker has to go out there and say Trump is worse than a racist, it must mean that it’s losing some of its impact. It would be racist to ignore their anti-American past because of their skin color.

This is all about making them victims. It’s all about making them appear to be just little people trying to save themselves and save their country and this big man bully Trump comes along and squashes them and steps on them. It’s absurd. Anyway, I think, folks, that it’s smart the way Trump has done this. He’s elevated Alexandria Ocasio-Cortez and her Squad, elevated them and now merged them with Pelosi’s Democrat Party.

And the media took the bait. The Squad is getting slobbering media coverage kind of like nineties boys’ bands got. But Trump has rebranded the Democrat Party with the help of the media that hates him, and he did it for free. He did it for no charge. Now, as irritating as media coverage of Pelosi’s Squad may be, remember that most Americans are irritated at all of this too.