America Reacts to the Mueller Hearings

RUSH: I want to start on the phones in Hershey, Pennsylvania, with Carryn. Welcome, and it’s great to have you here with us. Hi.

CALLER: Well, you don’t know how great it is to be with you. I was watching these hearings all morning at church, and I listened intently, and when I came home, I tell you what: I was so discouraged about, “Wow, maybe he is guilty.” But I thought, “I gotta get home, turn Rush Limbaugh on, and hear the truth.” I’m so glad I did! You made it really sound sensible. (chuckles) 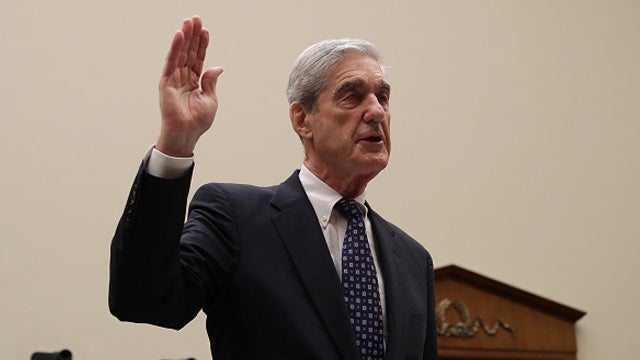 RUSH: Let me give you a different context in which to judge what you saw this morning, ’cause I really do want to try to correct this.

RUSH: Because the bottom line, Carryn: The Democrats, again, have tried to make a case out of something that didn’t happen. They tried to do exactly what you said happened. You thought that they had created a new reality here where the president’s guilty, but you knew watching today the president hadn’t been charged.

RUSH: He was not guilty of collusion. You knew what the report says.

RUSH: You’re watching this. So they had this task. They wanted to take a set of circumstances and act as though the president’s guilty and the only reason nothing can be done about is because he’s sitting in office, when he didn’t do anything.

RUSH:Well, let me give you a different context. Imagine, Carryn, that you’re Donald Trump. You’re sitting there in the Oval Office, and for 2-1/2 years you’ve had to put up with this garbage that you cheated, that you’re a traitor, that you stole the election, that you colluded with one of America’s enemies. And you know that you didn’t! 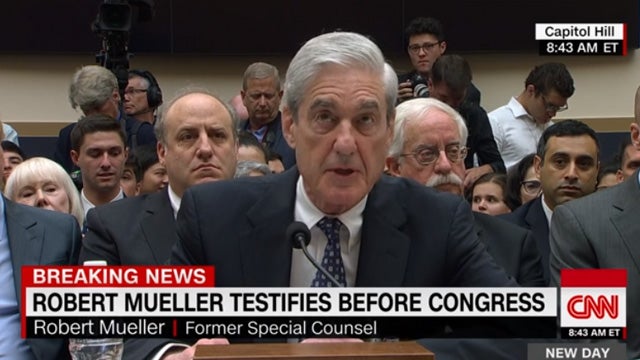 RUSH: You know that this is all bogus!

RUSH: You know this is all political!

RUSH: And so you’re sitting in there and you’re watching this go on, and there’s nothing you can do about it other than execute your constitutional duties and fire these people, but he knows that’s not gonna stop the investigation.

RUSH: — are being charged with being a traitor, except you know you didn’t do it. Are you just gonna sit there peacefully and trust that things are gonna work out, or you gonna be agitated and angry about it?

CALLER: Well, you know what? That’s one of the things I love about our president, because he fights back, and they don’t like the tweets he puts out there. But you know what he’s thinking! I mean, you know he’s sincere.

CALLER: You know he’s not speaking politically correct, and I just love him, and I praise God for you and I am just in love with him.

CALLER: I would love to meet him and just throw my arms around him and give him a hug.

RUSH: Well, I guarantee you if you ever did meet him, Carryn, you would be thrilled because he would be exactly what you want him to be. There are no airs. There’s no phoniness. He’d be the genuine guy you know. If you met Trump, you would not have the reaction, “Gee, who’s this guy? I don’t know this guy.” You would be eminently pleased, and this is the greatest compliment I can give a famous person or celebrity: If you meet ’em, if they’re exactly what you hope they are. They’re genuine and so forth. That would be your reaction when you do meet Trump. I appreciate your thoughts. I’m glad I was able to talk you off the ledge. Glad you tuned in here to have that happen. I want to get one more in before the hour ends.

Columbus, Ohio, next with Evan. Welcome. Great to have you here with us.

CALLER: Rush, it’s an honor to speak to the golden-throated Rush Limbaugh.

CALLER: Rush, I gotta tell you, I am so glad these hearings happened because it’s the last breath of a dying animal. I think after these hearings Trump will be soaring on princely wings. I think we also have to examine the fact that they could have had this at any moment, and I think they’re trying to play two sides of it because it’s happening in the summer. So if something comes about, they’ll have their sound bites. If not, there’s minimal viewership because it’s happening during the summer and people are —

RUSH: Oh, no. Wait a minute. No, no. They’re hoping to create the viewership. Oh, they hope this is watched by record numbers. That’s what this is all about. They’re choosing summer when supposedly nothing else is going on. Remember the Watergate hearings happened in the summer, and the Democrats think this is Watergate come again. They chose this time where it’s a downtime and everything on TV ostensibly is reruns. Of course, they don’t know that there aren’t any reruns on Netflix or streaming. There’s nothing…

There’s never a boring time on TV anymore, unless it’s network TV where they do occasionally do some reruns or run these B, C, off-primetime series just to burn ’em. No, this was… They’re trying to create the biggest audience that they possibly can for this, and they’re still hoping. The Schiff committee hearings are just now beginning, and I guarantee you — I guarantee you — they’re gonna rework it so that Mueller only has to answer yes or no this afternoon. Every question from the Democrats gonna be a leading question. “Yes” or “no” is all he’ll say.

RUSH: Jane in San Jose. Great to have you on the program. You’re up next. Hi.

CALLER: Thanks, Rush. It’s a total thrill to speak you. Listen, I’m not buying this Mr. Magoo routine. Do you remember Rosa Lopez from the OJ Simpson case, Ms. No Recuerdo, Senor?

RUSH: No. I don’t. I don’t remember Rosa Lopez.

CALLER: Well, she kept saying, “No Recuerdo, Senor,” when she was on the stand and being asked all the questions. He’s saying that things are outside of his purview? I think the only thing outside of his purview is the truth. I don’t think his Mr. Magoo. (giggles) I think he certainly knows about —

CALLER: Well, you’re saying he doesn’t really know what’s going on. I think what he’s doing is he’s giving the staffers and the media the page numbers and the paragraphs because the only time he perks up is when (crosstalk).

RUSH: No. They are giving him the page numbers. It just happened again.

RUSH: There’s a Democrat asking him questions, and Mueller’s refusing to answer, and the Democrats is saying, “It’s right here in the report, sir.”

RUSH: Okay. So now let me ask: Do you think this is helping the Democrats today?

CALLER: For the people who already believe this, sure! They’re just… You know, they’re getting them all re-stirred up.

RUSH: Well, but that’s not the objective. The objective… The Democrats are trying to get Mueller to trigger an impeachment. Pelosi doesn’t want it. The American people, in the latest polling data — more than ever — don’t want impeachment. Fox News poll 49% of the American people say there’s nothing that could happen today that would change their opinion of this story. These guys in their committees want Mueller to say they have to go get Trump because he legally can’t.

RUSH: Here’s Jason in Birmingham, Alabama. Hey, Jason. It’s great to have you on the EIB Network. Hello.

CALLER: Hey, Rush. Hey, listen. I think in an effort to salvage something out of this mess I think you’re gonna see the Democrats now attack Mueller, cast him aside as a doddering old fool — possibly senile, could not have led a solid investigation into the president, probably missed a lot of things — and because of that, we need another investigation by somebody competent.

CALLER: I’m surprised we haven’t seen the media do this already.

RUSH: Well, give them time. I… (laughing)

CALLER: Hell, I thought of it.

RUSH: Well, don’t… No, no. You’re pretty unique here. If you thought of it, they can, you think. (lauhing) I like it. I hadn’t thought of that, that the Democrats would be looking at this as, “Oh, my God. This guy’s such a fool. We had no idea. We need to redo the investigation with somebody who knows what he’s doing!” Taking the joke seriously, I don’t think Democrats would want to admit how bad this has been today.

If they said, “Look, this guy’s some doddering idiot. He doesn’t even know what’s going on! We need a new investigation.” I don’t see them admitting that. But the Drive-By Democrats are. The Drive-By Democrats are beside themselves, folks, and that’s what we have next coming up in the audio sound bites with some other Republicans. Like, Louie Gohmert was kick-ass today in his limited questioning time.

RUSH: This is John in Marlboro, New York. Welcome, sir. Great to have you on the EIB Network. Hello.

CALLER: Well, thank you very much for taking my call, Mr. Limbaugh.

CALLER: I’m sitting here supposed to be mowing the lawn, but I’m having more fun listening to your show. My comment is this: I think that Mueller is a state-down Never Trumper regardless of what his Republican background is be supposed to be. I think he’s one of these Rockefeller Republicans who is totally embarrassed by the way Trump runs his administration. No matter what Trump does, he’s going to be against him. But he’s also one of these guys that can’t lie, because he’s not meant to be that way.

RUSH: Well, I agree with that.

CALLER: He’s trying to muddy the water as much as he can. That’s why he had that press conference about a month-and-a-half ago. He just tried to muddy the water. It had nothing to do with anything solid, but it put the Attorney General Barr out to make an explanation of what was going on.

CALLER: To keep the —

RUSH: No, you’re right about this. Mueller… There’s no question he’s a Never Trumper, and there’s no question he’s part of that group in Washington that’s embarrassed. “Oh, my God, this guy is our president?” There’s no doubt you’re right about that. Rockefeller Republican. That’s what we used to call RINOs, folks. If you’re wondering what a Rockefeller Republican is, it’s a reference to Nelson “Rocky” Rockefeller who was always running against Nixon. He was a rich guy from New York, and he’d go to the Republican convention. 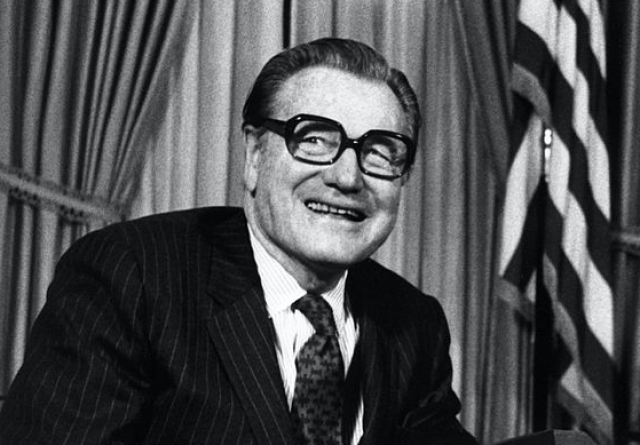 But during the day, he’s at the Nelson-Atkins Museum of Art and makes sure he’s being photographed with his hand stroking his chin as he looks at some art thing up on the wall — and, of course, his wife was named “Happy.” Rockefeller… (chuckling) You know, we have a saying in golf. Rockefeller putt. Do you know what a Rockefeller putt is? You have to know how Rockefeller died for this to make sense. “A Rockefeller putt is a putt that rolls and rolls and at the last moment it falls in.” We call it “dying in the hole.”