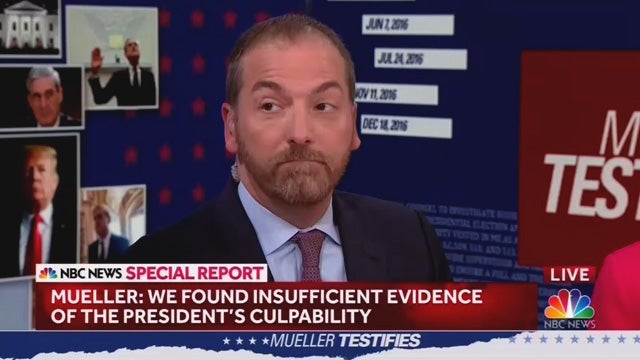 ANDREA MITCHELL: And they were warned —

RUSH: Let me translate this. F. Chuck Todd thinks this has been a disaster today. He thinks it’s been an absolute disaster. And, by the way, there’s one other sound bite from Chuck that we have that doubles down on that assessment. They’re worried. They really are. This has been a debacle! It’s been a disaster! Mueller was supposed to be fit, full of vigor. He was supposed to be cogent and coherent! He was supposed to say, “I can’t get the guy, but you have to!” That’s what they were hoping! They’ve been trying to make something real that isn’t!

Trump isn’t guilty! He has not been charged. They want people to think that he would have been if not for Mueller. Mueller hasn’t gone there. So now F. Chuck Todd is blaming this debacle on the right-wing media machine. I don’t know about you, but I’m not there! I’m not answering questions. I’m not in that room. I haven’t been in any room today. Whatever right-wing media machine’s going on is not part of the hearing! This is a Democrat show! The Democrats are running this show.

RUSH: Grab sound bite number 3. This is NBC at The Morning Break today during the Jerry Nadler committee hearings. When they took a break, it was time for the Drive-Bys to analyze and assess what had happened up to that point. Savannah Guthrie says to F. Chuck Todd, “Democrats were hoping that this would be a compelling movie version of the [Mueller] Report… Have we seen that so far?”

TODD: We haven’t. Because in no movie would the best actor, the lead person here, have the fewest words spoken. 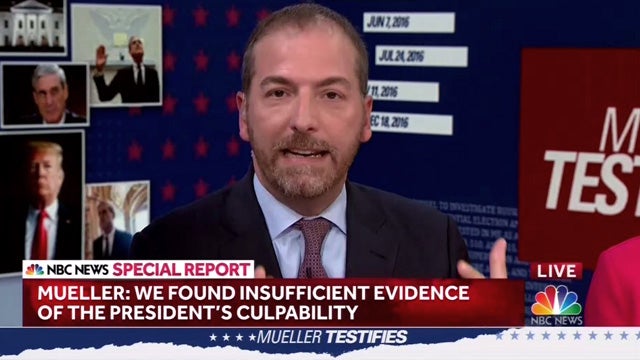 TODD: And the problem here is you… Basically, the narrative that Democrats are — were hoping that Bob Mueller would be telling is essentially they’re telling him, and he’s saying, “That’s true. Yes. That’s correct.” The worst ni… I wrote it down. There are two, to me, that just… Narrative nightmares for the Democrats.

GUTHRIE: The Democrats cannot be surprised by this. They had to subpoena his testimony today!

GUTHRIE: He told them. He said, “I won’t say anything beyond the report,” all but saying, “Please don’t come in and tell me to testify.” They should have been prepared. So Democrats who — who would active this as, you know, the bringing to life of the Mueller report, Robert Mueller does not appear to be on board with that strategy.

MITCHELL: A-and he’s not pushing back against the Republican attacks.

TODD: There is no urgency coming from Mr. Mueller. So therefore, Savannah, I don’t see how this ever leads to Democrats, by the way, going to step two, which is impeachment.

RUSH: They’re distressed. They’re depressed. They can’t believe it. They can’t believe the Democrats didn’t know this before they put Mueller up there! I think they knew it. They’re deluded, folks. They knew it! They were hoping. They put him up there hoping for magic. They are convinced! They don’t need Mueller to really say anything. They just need Mueller sitting there while they speechify when they’re supposedly asking questions, and if Mueller says (muttering), “I concur with that. Uh, that’s mostly accurate.”

When Mueller crosses them up — and it just happened. You know, Eric Swalwell — who is really, really an irritating little punk. This guy starts leading Mueller down a primrose path, and Mueller didn’t go. (impression) “I — I would disagree with that, uh, characterization. I don’t think that’s happened. (muttering) Uhhh, that’s outside the purview! I can’t speak to that. No, I won’t speak to that! I… Nope, nope, nah… (sputtering) I — I — I…” You know what Swalwell did? This is classic of these leftists. “Mr. Mueller, since January 1, 2017, to the present, Donald Trump has called Putin six times!

“He’s met with him 10 times. He’s referred to him in press statements 25 times. How many times have you talked to Donald Trump in the last 2-1/2 years?” (impression) “Uh, I’m not gonna characterize that.” Well, Trump is only the president of the United States. He goes to meetings where Putin is. Putin is not trying to put Trump in jail! It would be irresponsible if Trump refused to talk to Putin when they get together. The idea that Trump is talking to Putin! Eric Swalwell tries to create this picture where Trump is guilty by association — and especially when you add to it that he won’t talk to the revered Robert Mueller.