RUSH: The Democrats are throwing Robert Mueller overboard now. Can you believe this? All week and for the 2-1/2 years he has been Mr. Integrity, Mr. Honorable, mister this, mister that. But now this locoweed from California, Ted Lieu, is out there saying that somebody got to him before his testimony. Somebody got to him?

What Ted Lieu is trying to say is that some evil, rascally Republican found a way to bribe or otherwise intimate Mr. Integrity and make him appear the way he did. How can the two go together? How can he go from Mr. Integrity, Mr. Honorable, Mr. Everything, Mr. You Can’t Challenge Him at All to somebody who can be compromised like this? These people… (chuckling) You know, people are starting to send me sarcastic notes. My friends say, “You’re not gonna have anything to talk about today, are you?” They send me this every day.

Usually in August, there isn’t much because everybody’s gone. Like Congress is on their six-week recess, but you’d never know it.

RUSH: Matt in Bristol, Connecticut. Thank you again for your patience, sir. Hello.

CALLER: Hi, Rush. Nice to talk to you.

CALLER: As I re-watched the Mueller testimony, he seems so uninformed. Is it possible that they kept him in the dark because they thought he might actually shut it down if he knew all the facts?

RUSH: It’s tempting to think that, but no. Now, let me rephrase that. Let me ask and make sure I understand what you mean. You’re talking about the other investigators, the Hillary lawyers that he hired –

RUSH: — that, as they’re doing their work, they purposely kept him in the dark as to what they were finding so that he wouldn’t shut them down?

RUSH: It would be wonderful to think that. And because of the — I mean, look, I understand why you think it. This guy’s been portrayed as Mr. Honor. We were told he’s impeccable. His reputation is impeccable, he’s an American hero, he’s honest. And it doesn’t jibe with the job that happened here in his office, in his name.

They’re still out there lying about it today! Why hasn’t — let me ask you this. Jerry Nadler today, in asking for grand jury testimony, which is against the law, has said that Mueller confirmed that the Russians colluded with Trump in the election and that Trump obstructed justice! He’s out there saying Mueller said this! I am not making this up. 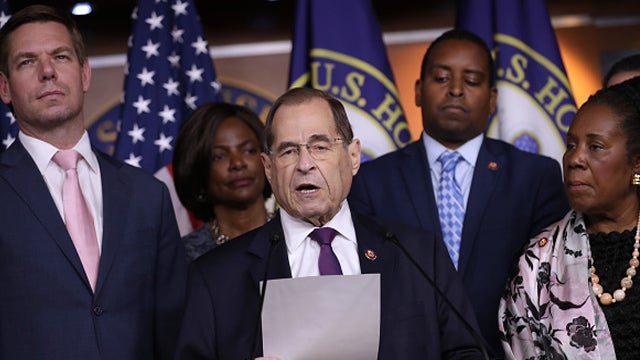 Nadler had a press conference today where he said these things. He said Mueller told the committee that Trump lied and obstructed justice, and he said that Russians meddled in the election, that there was collusion between Trump and the Russians.

Now, why, Matt, are investigators not standing up and saying, “No, that’s not what our report says.” Why isn’t Mueller standing up and saying, “No, that’s not what I told you.” I mean, these lies are so blatant, these mischaracterizations by Jerry Nadler today are so vile and disgusting that if they were said about you, if you had testified before Nadler’s committee and said what you said and then he calls a press conference a day or two later and totally mischaracterizes what you said, you would be loaded for bear.

So here’s Nadler out there today saying that Mueller testified that there was collusion and that Trump participated and then lied about it. All of this is an abject lie. If Mr. Mueller is so filled with integrity and so filled with honor, I’m telling you he wouldn’t have taken the job.

Now, I know people are saying “Rush, the man’s an American hero. It’s the twilight of his life. He’s obviously not all there. Why continue to hit the guy?” Because this man is allowing his reputation to be used to press abject lies. This man is allowing his reputation for honor and integrity and unassailability to be used as the cloak, as the disguise, as the cover for a whole lot of lies that are slanderous and libelous to boot, if we weren’t talking about a political figure!

So, no, there’s nothing about Mueller being kept in the dark and not knowing what’s going on. I mean, that may be the case in the sense that he doesn’t have the energy anymore to actually do a 9-to-5 or 9-to-8 day every day with exhaustless energy interviewing people. Those days are long ago, but there’s no way anybody’s pulled the wool over his eyes.