Will Nike Pull a Harry Reid and Claim Credit for the Betsy Ross T-Shirts?

RUSH: John in Hopkins, South Carolina. Welcome, sir. Great to have you with us.

CALLER: Rush, it’s a thrill and a pleasure to talk to you. Charter listener, first-time caller. I was a Dittohead when ditto wasn’t cool. I just want to say, ask you, how long before the CEO of Nike comes out and takes a little bit of credit for the charity work you’re doing, kind of like Harry Reid did with that letter you auctioned? 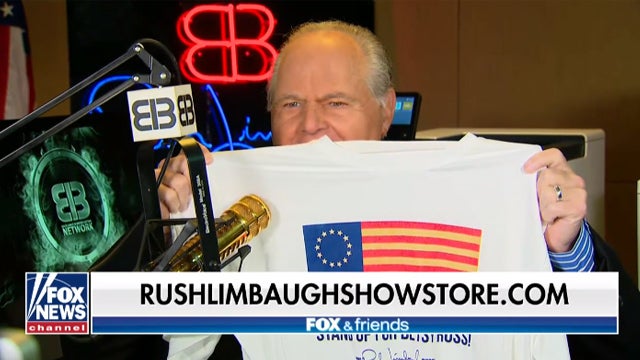 RUSH: You know, it’s never gonna happen. That’s a great question. It’s never gonna happen. Now, his question is related to Harry Reid and the phony soldier circumstance. Let me briefly, for those of you who were not listening at the time, this is a phenomenal story, folks. The Democrats at the time — this is during the Iraq war — they are doing everything they can to run down the United States military. They’re doing everything they can to destroy George W. Bush.

They’re criticizing David Petraeus’ congressional testimony before he even shows up to testify. They’ve got billboards out there claiming that he’s lying when he hasn’t even testified yet. But they were doing anything they could to destroy the Iraq war effort and the War on Terror, anything to destroy George W. Bush.

So our Marines were being accused of terrorism, and John Kerry echoed the charge, because some people in Haditha had accused the Marines of raping a mother and children while storming in parts of Baghdad.

It was sickening what they were doing. It was sickening. And one of these guys, a guy claiming to be a Vietnam War vet, called a press conference I think in Oregon or Washington and stood up and said some of the most ridiculous things about Bush and about the war effort, and it turns out that he was dishonorably discharged and never even served, and I called him a “phony soldier.”

The Democrats ran to embrace this guy, ripped me as unfriendly to the military. Here they are destroying and accepting the idea that the U.S. Marines in Iraq were a bunch of rapist terrorists, and I rip one of their phony soldiers. The guy was not a legitimate soldier, he had been dishonorably discharged, he was a political tool. I call him a phony soldier, and the Democrats erupted with stories picked up by the media about how I am anti-military, which is absurd on its face.

In the middle of this Harry Reid writes a letter to the CEO of my syndication partner at the time, Clear Channel, asking the CEO to either suspend me or force me to apologize for this unwarranted attack on our brave military men and women. So I got hold of the CEO, his name was Mark Mays, said, “Could I have that letter? Would you let me have it? I’d like to auction that letter on eBay as a sign, as a bit of evidence about the United States government targeting a private citizen — me — and trying to shut me up!”

The Senate majority leader, Harry Reid, sent a letter to this guy ask — so Mark Mays courageously and bravely let me have that letter. We put it up for auction on eBay. I promised to match whatever it raised. It raised almost — well, I forget — $3 million. And we had a charity that it was gonna go to. And some woman — there was a bidding war at the end, and something tells me that the final number was four million and that I matched her three million or whatever.

But it went through the roof like this Stand Up for Betsy Ross T-shirt did. And we were having more fun with it, and everybody, the media and everybody became aware of what was happening here, that Harry Reid’s letter had been turned back on him and now it’s for sale on eBay as an example of government oppression, overreach trying to attack a private citizen.

And he reads this letter, by the way, from the floor of the Senate. And I’m saying, “Gosh. I wish my parents were alive to hear this. They’d be so proud.” Well, anyway, when this project was completed, Harry Reid went to the floor of the Senate and claimed credit for this. He acted like he was part of the plan to generate money. And he said it was wonderful what Americans can do when working together.

He just made up his entire level of involvement. He had nothing to do with it other than writing the original letter. But the media didn’t cover any of what Harry Reid’s humiliation or embarrassment was. The media gave Harry Reid credit to the extent that they even mentioned it.

So John here is wondering when the Nike CEO is gonna basically move in and do the same. The Nike CEO is never, ever gonna say a word about this. There will be nobody on the left who will ever say a word about this. The CEO of Nike will never be asked about it. Kaepernick will never be asked about it. This little operation is occurring in a media vacuum. 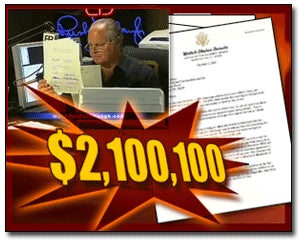 But see, that’s not why we’re doing it. We’re not doing it to get noticed and for the media to praise it or the media to publicize it. I’ve been around long enough to know that that isn’t gonna happen. This is being done strictly for the cause. This is strictly for the effort. This is one of those examples where I don’t need left-wing Drive-By Media acknowledging this to feel good about it.

The people I care about already know full well what we’re doing here. And that’s Frank Siller at Tunnel to Towers and all of his people and all of you. And the people at Fox & Friends have been incredibly supportive here, and all of us at RushLimbaugh.com, that’s plenty. We know. But you are the more important ingredient here. You know exactly what this has been.

I mean, this show is done for you every day. Not for CNN. Not for the New York Times. We don’t do things here to get noticed by those people. We do this to meet and surpass your expectations each and every day.

Folks, the lines of demarcation in our culture are drawn. We’re in a revolution of sorts. It’s nonviolent for the most part, but we’re in a race, as I’ve said over and over, we are in a race to determine the future of this country. And the battle lines are drawn, and there’s very little, if any, overlap, meaning things we have in common with them and vice-versa.

RUSH: Yeah. Here we go. The total amount of money raised for the Harry Reid letter was $2.1 million, and I matched it. So the total was $4.2 million. A woman named Betty Casey, who was director of the Eugene B. Casey Foundation, paid $2.1 million for the rights to the Harry Reid letter and to display it as she wishes. Mike, I’m sure you have the Dingy Harry tune ready to go here, right? Yeah, hang on for that.

I want to read you what Harry Reid said. Within an hour of the record-setting auction closing, Senator Reid addressed the issue again on the floor of the Senate, stating, quote, “I strongly believe that when we can put our differences aside, even Harry Reid and Rush Limbaugh, we should do that and try to accomplish good things for the American people.” 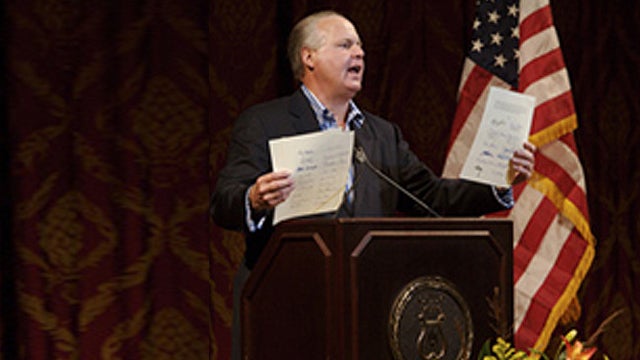 We didn’t put our heads together! Harry Reid tried to essentially get me censured with the CEO of my syndication partner, who couldn’t anyway, but he tried to, tried to shut me up on a phony constructed thing, “phony soldiers,” as though I was anti-military. Harry Reid didn’t participate in anything. Harry Reid didn’t do anything other than write that letter that participated in raising the money. He didn’t work with us, he just came in at the end of it trying to claim credit. Then we put together a tremendous little parody tune to go along with it.

And we got a lot of fun out of that, a lot of mileage out of that, Dingy Harry and the letter. But I don’t think anybody from Nike’s gonna pop up. That’s the last thing I’m expecting.