RUSH: Frank Siller today. He was on Fox & Friends, 8:15 this morning. He is the CEO of the Tunnel to Towers Foundation with whom we have ended up partnering. You know, we’re selling these Stand Up for Betsy Ross T-shirts. We had another 20,000 ordered yesterday. It’s so far beyond what we expected and so forth. 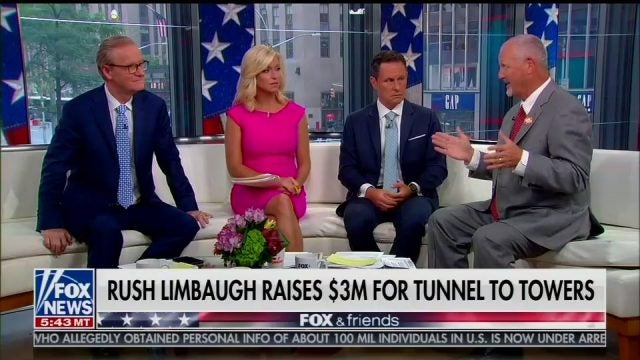 We’re tracking down every shirt that we can to be able to fulfill these orders. Don’t stop. Don’t get the wrong idea. Anyway, he was on today to discuss — we upped the donation from two million one week ago to three million. I announced it yesterday. And Frank Siller was on Fox to talk about that today.

Steve Doocy said, “Rush was on our show yesterday. He was talking about how many people have opened their hearts, opened their wallets to buy shirts for $27, and pretty much bought every available T-shirt in the United States in size XL,” which is true. We now own every size XL in the shirt that we’re selling. They’re not all printed yet, but we’ve bought ’em to have them in stock. Here was what Frank Siller said.

SILLER: Stand Up for America, Stand Up for Betsy Ross, at the same time do good with your statement by donating, ‘cause that money has come into the Tunnel to Towers foundation. We announced last week six mortgages paid off already because of that for his first couple million dollars they donated. Now we have four great Americans that gave their life for our country that we’re gonna start houses for their families, and we’re gonna have ’em delivered by Christmas. 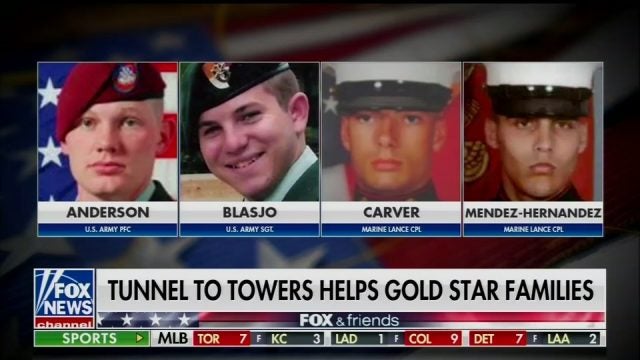 SILLER: That’s right. And we’re gonna have them delivered by Christmas.

DOOCY: All of because of T-shirts?

SILLER: All because of this great movement that Rush and his wife Kathryn started to stand up for America. Betsy Ross, she’s not political. Nothing political about that flag. That flag is a beautiful flag. It stands for when we started our independence. Now, keep on buying those T-shirts, because those T-shirts are doing such a good job here for America’s greatest people who sacrificed so much for our country.

RUSH: Frank Siller of the Tunnel to Towers Foundation, and we gotta take a brief time-out. We’ll do that and be back. Oh, folks, again, another reminder, I keep almost forgetting this. The knockoffs, the bootlegs. I don’t know how to say this any plainer. There’s only one place that you can get, if you want to do this, there’s only one place you can get the legitimate Stand Up for Betsy Ross T-shirt and have a portion of the proceeds go to Tunnel to Towers, and that’s at RushLimbaugh.com. And once you go there, find the “Store” tab. That’s the only place. 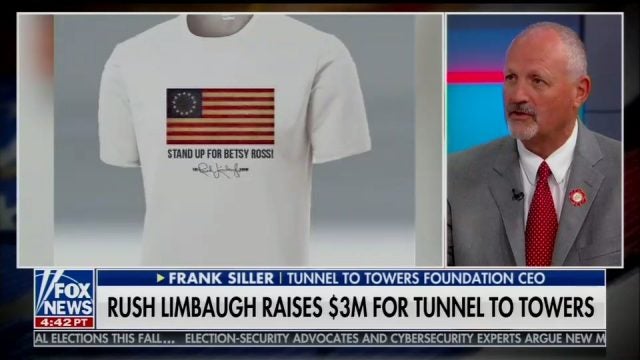 Now, I know if you search Google because you can’t remember that or you hear about this word-of-mouth or you tell somebody about it word-of-mouth, they go to Google, they search it, Google’s returning a bunch of bootleggers at the top of the search results. They are frauds and they are fakes. They’re attempting to earn their own money by making people think they are selling the authentic T-shirt. Nobody else is. We’ve not licensed it to anybody. There isn’t anybody.

Some of them have even stolen our photos from our website and our graphics. One that we discovered last night actually has a picture of me holding up a black version of the Stand Up for Betsy Ross T-shirt, and there isn’t one. There’s not a black version. So they put just a little bit of difference in to give themselves some kind of safety. But, regardless, some of these people have ended up being charged $1,500. That’s not the advertised price on these sites. They advertise whatever it is, $25, $27, however they’re trying to do this, but they’ve been charging people $1,500.

Now, we’ve got an army of legal people doing our best to tamp these things down as they pop up. But we’re now up to over 250 of these, to give you an idea of how popular it is and so many people want in on this. And it’s also kind of eye-opening to see how many fraudsters there are that are literally trying to fool people, trick people into thinking that the authentic shirt’s available at their website. And it isn’t. It’s only available at RushLimbaugh.com.

Make sure you spread that word if you’re talking about this with people, ’cause otherwise they’re gonna get jammed, and there’s nothing we can do. If you buy one from a fraudulent website, there’s not a thing we can do about it. You own it, you’ve bought a shirt and you own the shirt, but it’s not authentic and none of what you’ve spent is gonna go to the charity.