Caller’s Idea: Send Millennials to the Military to Teach Them About Communism

CALLER: Hello, Rush. It’s a privilege to speak with you.

RUSH: Thank you very much. Great to have with us, sir.

CALLER: Yes. Well, I’m sorry to have to disagree with you, but on your point about the radical Democrats, I think that they have morphed into Ralph Nader’s Green Party from 1992. And also I know you spend a lot of time thinking about our younger generation, why are they so radical, and I think I have a way to assist them to get back to what’s important for our country.

RUSH: Well, okay. Since it’s Open Line Friday, I’ll bite on how you think you can save the Millennials. What would that be?

CALLER: Well, having gone into the military right out of high school, it is, what I believe, an institution that functions just like a communist-run country. It’s a great institution in our country, if needed, but it helped me to appreciate freedom. I did not have any way to determine where I was going, what I was doing, and for how long. And I think our younger generation has parents that are —

RUSH: Now, wait a minute. You didn’t really mean that to sound like — you called the U.S. military a great communist type organization that limits freedom and therefore it is educational for people in teaching them this is not what we want. That’s your take, right? That’s pretty much what you’re —

CALLER: No, well, thanks for letting me clarify. No. I’d just say that the military is great. I loved it. But at the same time, I realized how much I appreciated having freedom, having my own say. And that’s why I got out. But I don’t believe that there’s so many people in our country that haven’t had that experience, and they don’t appreciate freedom. And some people love that —

RUSH: Well, now, that’s true. But that’s not exclusive to young whippersnappers. That is a function of being born into it and never having had to fight for it. And that happens for all of us. This is why I have been so focused on people learning the founding, who those people were, what they did. It’s so special. It is so unique. It is a testament to every positive human characteristic God planted in us.

The American founding has everything. If you can teach the awe, if you can create the awe and the reverence for what happened — why do you think the Democrats are trying to make people think it was nothing but a bunch of white racists establishing a white nationalist country? They are totally lying and distorting the founding of the country precisely because of how special and unique it is and how everything in it destroys the concept of liberalism and communism and socialism.

It was the first country not to incorporate any kind of monarchy or dictatorship or tyrannical ruler of whatever stripe you want to call it. The first country ever organized with the essence of the freedom of the individual as the primary organizing influence.

Now, your point about the military. People have made it for as long as I’ve been alive that if you have an out-of-control kid that you have failed to discipline, get ’em in the military or send ’em to a military academy, military school and teach them discipline because there’s nothing else that can happen there. 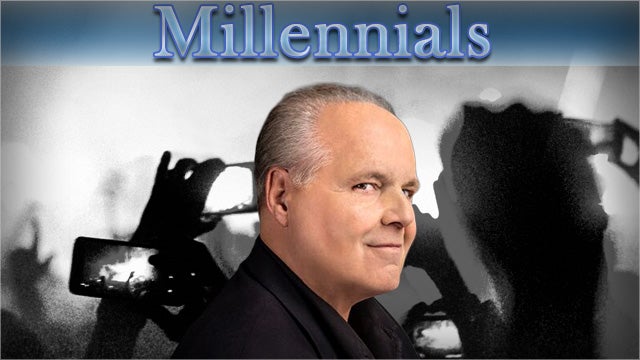 Now, you’re right. I know what you’re trying to say by claiming the military denies you the freedom to move about and do what you want and go where you want, and that’s a great way to teach communism. But the military is not communist. The military is teaching loyalty. The military depends on loyalty and hierarchy. And it depends on an organized structure of people accepting orders and following them for a specific objective.

Now, in terms of somehow trying to instill the value of freedom in people who take it for granted, that’s a tough thing to do when you’re born to it, when it’s all you know, and you’ve been listening to your teachers tell you how rotten the country is, you’re not gonna value it as much.

So I understand the challenge here, but that’s why teaching the founding, to me — I mean, everything about it that people of a certain age, whatever grade,, can learn. Everything they’re capable of learning, it should be taught.