RUSH: Now, I gotta show you something. If you’re watching on Dittocam, we’ve also got the picture posted at RushLimbaugh.com. Last night at the Trump rally in Cincinnati, we spotted a Stand Up for Betsy Ross T-shirt in the crowd behind the president. Go ahead and switch that over to the Dittocam. 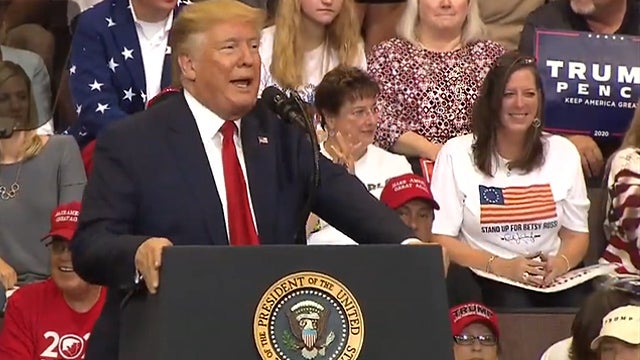 Look to the president’s left as he’s standing there. All the way to the right of the screen, and there it is, a woman in Cincinnati proudly wearing — look at the smile on her face — very happy, having a wonderful time, Trump’s on a roll, everybody at the Trump rally is just jazzed. And there she is wearing her Stand Up for Betsy Ross T-shirt. That’s just great.

Just trust the fact — we had a secret staff meeting. And one of the things that was discussed — you know, this could go on through the balance of the year, and I ain’t lying, folks. Folks, the daily interest and response to this, when I tell you that we’ve bought out every one of the XL T-shirt of this style in the country — now, we’re not sold out. We had to buy up all the stock to make sure we could fulfill the orders. And XL is a very requested size. So we didn’t wait. We picked up everything. 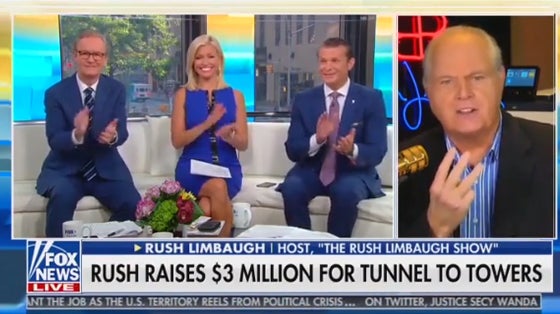 Don’t sweat it. I mean, we’re not sold out of it yet, but we wanted to make sure that we didn’t run out in a couple of weeks. We’re planning other adjustments and so forth to accommodate this, because it just keeps going. The amount of money so far is $3 million to the Tunnel to Towers foundation. Because, you know, Betsy Ross isn’t political. They try to politicize this stuff. The flag isn’t political. These are symbols of our liberty and freedom, and people are tired of them being ripped to shreds and want to push back.

RUSH: Here we go to Kyle in Panama City, Florida. Great to have you with us today. Hi.

CALLER: Honor and a privilege, Rush.

CALLER: First and foremost, I’d like to thank you for everything you’ve done with the Betsy Ross T-shirt and Tunnel to Towers. That is really something. You are the face of patriotism, sir.

RUSH: Wow. Well, thank you. Thank you very much, but I’ll tell you, it’s the audience that’s making all that possible. It’s all of you out there that are snatching up that shirt, 27 bucks apiece. I mean, stop and think, a $27 item has created a gross amount — I haven’t even told you what the gross is. Never gonna do that. But the proceeds, three million and counting now, to Tunnel to Towers. That’s incredible.

CALLER: That leads me into my question. I know that you probably are the last person to seek any type of affirmation or acknowledgment for a lot of your charitable works and the good deeds that you do, especially from Hollywood. My question is that, has this — and I hope I’m wrong, I hope the guy has reached out to you privately or publicly, but I haven’t seen it anywhere, but has this Jon Stewart guy, who basically you have middle ground with on this, the same cause, and I take nothing away from Jon Stewart ’cause he’s trying to do the same thing. But I haven’t heard him acknowledge one bit everything that you have done, and he’s been trying to do the same thing.

RUSH: No. And that’ll never happen.

CALLER: I didn’t think it would.

RUSH: That’s politics. But he’s going about it the usual way, get Congress to authorize a bunch of spending and —

CALLER: That’s what liberals do.

RUSH: Yeah, make it a legislative action or bill. And that’s been the impetus there. And they got the bill signed, the president got the bill signed. They had a big signing ceremony earlier this week at the Rose Garden at the White House with everybody applauding themselves and each other for all the great work in appropriating the money.

It’s just the way government is. When government spends money, they then hold a ceremony to applaud themselves for doing it. You know, what a great, great job it’s been to spend the money. They’re applauding themselves for getting Congress to go along with spending it, but this was something that was totally independent from that.

CALLER: Right. It just seems to me that this meant so much to the guy, every time you see him, especially when he was in front of Congress, every interview he gives he’s driven to tears over this, and, you know, rightfully so. It’s a very emotional cause. But you would think that if it means that much to the guy, that he would at least do something —

RUSH: You know, I appreciate your sensitivity and awareness of that. But this kind of dovetails with what I was talking about earlier being aware of, you know, how much dislike, hatred, or opposition and just not exposing myself to it. In this case, I have no expectations of any recognition, and it isn’t why we’re doing it.

Folks, you give me all that I ever need. You people in this audience, by listening here every day and participating as you do in these efforts that we occasionally do, that’s all that I need. I don’t need affirmation from the media. I kind of liken myself to a baseball player. A baseball player hits a grand-slam home run to end the game doesn’t need to be told how great it was.

And, by the same token, a great baseball player striking out with the bases loaded in the bottom of the ninth losing the game doesn’t need to be told what a mistake he made. You know, I know when I’ve done well and when I haven’t. And, you know, feedback is nice, but it’s not the reason for — now, it is for a lot of people.

A lot of people live and die on the buzz. A lot of people have whole departments, employees, PR people to create buzz about what they haven’t done to make it look like they have done it. I have never wanted buzz to replace legitimacy. You know, I don’t want you thinking this is the most-listened-to radio program in America because you read that it is. I want it known because it factually is the most listened to. You know, as I say, I’m the mayor of Realville.

Do you realize if I hired a PR person to call the media after every show and say, “Did you hear what happened on the Limbaugh Show today?” And then put out a little press release, everything that was talked about, every pull quote from mine, some of it might get published. But probably not since every TV show does that.

Every television show and every network has a publicity department. And that’s one of the reasons why media is so lazy is that people that want media go to the media to get it. I always grew up thinking the media found these things out themselves because they were standout achievements and that’s why the media was reporting on it, but it’s not that way at all.

The media is sitting in there waiting for the fax machine to go off or now the Twitter bell to ring to find out what to cover. So if you can convince the media to write something, do it. I just don’t play the game. Your phone call, Kyle, is enough, says everything.