The Latest on Tulsi Gabbard vs. Kamala Harris

RUSH: We’re gonna be having a little bit more exploration today on Tulsi Gabbard versus Kamala Harris. But just a little teaser here. The state of California has begun to hide the official record of Kamala Harris as attorney general so people cannot go look it up and find out that Tulsi Gabbard is right. 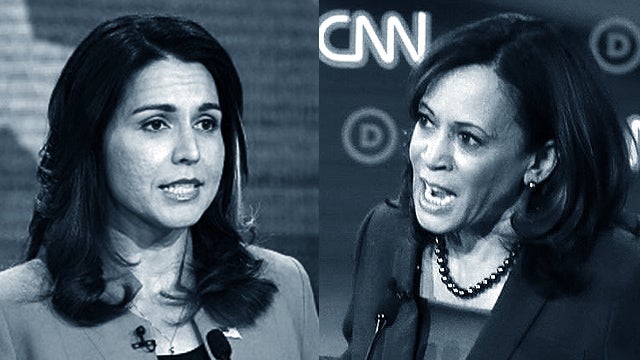 Now, folks, these are people that have been turning over every stone and rock looking for mythical information that Trump cheated with Russia. Now the same people demanding all of this transparency are hiding and covering up the official record of Kamala Harris because, despite what you’re hearing, you may think that Plugs is the frontrunner, but he’s not. Kamala Harris is actually, in a lot of polls, the frontrunner. And some of this is due to the fact that they went after Plugs in the debate, particularly on Wednesday night.

RUSH: Tulsi Gabbard has been making the rounds. She was even on Fox last night. She was on Tucker Carlson with Chatsworth Osborne Jr. before I appeared on Hannity, and the reason is the Democrats are going after her. She had the audacity to go after the Democrat frontrunner, Kamala Harris, and it was not pretty out there. “Appearing Thursday on The Hill’s Rising,” this is a podcast, I think, TheHill.com does, “Tulsi Gabbard … slammed … Kamala Harris for accusing her of being close to the regime of Syrian president Bashar al-Assad and mocking her low polling numbers, calling the attacks ‘pathetic’ and ‘cheap.'”

Tulsi Gabbard said, “Honestly, it’s pathetic that when confronted with the facts and the truth about her record that she claims to be proud of, as a prosecutor and as attorney general of California, all she can do is lob cheap smears” at me. “The American people deserve better than this, especially when her whole campaign is predicated on being a champion for the people, being a champion for black and brown people in this country, who have been on the brunt end of racial injustice” that she has handed out.

By the way, Ms. Gabbard herself is one-fourth Samoan. Did you know that? Not that it matters to anybody here! I’m just… This kind of stuff matters to the Democrats. And then she went to PMSNBC. “Tulsi Gabbard took on anchor Yasmin Vossoughian over her meeting with Bashar Assad.” See, what’s happened here is that Tulsi Gabbard literal fileted Kamala Harris, and Kamala Harris was not ready for it, because no Democrat is ready for it.

The Democrats have no experience at being ripped to shreds on their record.

The media does not do it. The Democrats — and it matters, folks. It’s like anything else. You’ve got to be able to deal with adversity, you’ve got to undergo training for it — and this is one thing the Democrats never do. They don’t know what serious media criticism is. They don’t know what lying, stinking media criticism is. So out of the blue, Tulsi Gabbard — who’s not even rating an asterisk — comes out and totally exposes the fraud that is the attorney general record of Kamala Harris.

So now the party and the media has focused all of their fire on Tulsi Gabbard! Now, I know I’ve mentioned this before, but to me this is just hilarious as it can be. I’ll tell you where I first saw it was right here on this program yesterday. It was during the 2 o’clock hour. We had a commercial break, top-of-the-hour news break, and I’m watching CNN. There’s A.B. Stoddard, who can fit to be tied. She’s a media journalist, analyst and so forth. She appears on all the networks. I guess she doesn’t have an exclusive contract. She just circulates among ’em all.

She was going after Tulsi Gabbard like I haven’t seen! She was going after her for being a Russian agent, that all of the support that she’s getting on Twitter is Russian bots. I mean, it was vicious! (summarized) “Tulsi Gabbard is nothing more than a Russian plant! Tulsi Gabbard is being set up to be a third-party, independent candidate by the Russians who are still in cahoots with Trump to steal another election.” This is what the Drive-Bys were saying yesterday. 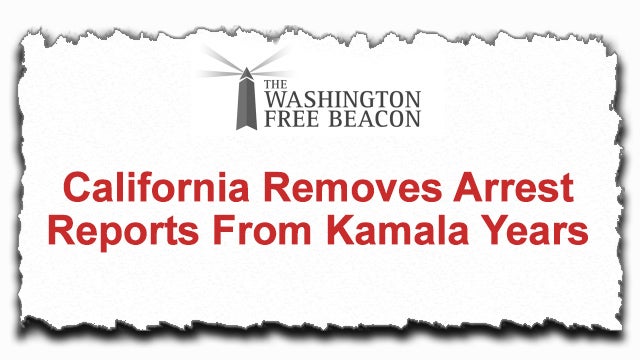 All because Tulsi Gabbard happened to act a normal candidate rather than to know her place. Tulsi Gabbard also says that Kamala Harris is accusing her of being “a traitor the country that I put my life on the line to serve.” Then there’s this story. This is from the Washington Free Beacon. The headline: “California Removes Arrest Reports from Kamala Years.” Now, keep something in mind here: The Democrats, the left is obsessed with Donald Trump’s tax returns from his private sector days, right?

The left wants the records of anything to do with Donald Trump, the Trump Organization, Ivanka Trump, Jared Kushner, Maryanne Trump, you take your pick. They want everything they can get from Trump’s private sector days. They have half of the state of New York, including the Manhattan DA, looking to find anything they can of Trump’s personal financial records so that they can release them. They are passing special laws to obtain them. California passes a law — which is unconstitutional and will not survive — saying that no candidate can appear on the presidential ballot in California who has not released his tax returns.

California doesn’t get to decide that. The Constitution decides qualifications for president. So this is gonna get thrown out, but they’re making a political statement. But now in that same state of California, the deep state in California is trying to hide the public work — the public work, not private, the public work — of Kamala Harris while she was AG. And don’t hold your breath waiting for the Drive-Bys to make this the big story it ought to be.

Don’t expect it, ’cause she’s the frontrunner! She’s the latest Trump slayer. So the Drive-Bys are not gonna make a big deal out of this. If I hadn’t told you, some of you may not ever know that this is happening. “The changes matter in part because the reports contain information about Harris’s entire time as state [attorney general], 2011 to 2017. Harris has taken fire from multiple opponents for her ‘tough on crime’ record as California’s top cop, an image that she has tried to shed as a far-left senator and presidential candidate.

“One particularly brutal attack came Wednesday night when Rep. Tulsi Gabbard … found that [almost 2,000] Californians were sent to prison for marijuana-related offenses while Harris was attorney general,” and there are photos of her smoking marijuana and laughing about it. She has kept people on death row despite their not supposed to be there .It’s kind of crazy.

She has been a really, really tough-on-minorities, a law-and-order AG. But she’s passing herself off as some Freedom Rider for African-Americans and other minorities. It’s one of the great lies of this campaign. She’s passing herself off as one of the great civil rights advocates of our time, when she actually has spend more time keeping minorities in jail than any Republican AG you can find. So Tulsi Gabbard calls her out on it, and now California has removed arrest reports.

“A redesign of the California Department of Corrections and Rehabilitation website will make it harder for voters to [find] Kamala Harris’s controversial record as the state’s” attorney general. The pre-2019 reports have been removed. Can you imagine if this story were something else? (interruption) Whoa, whoa, whoa! (interruption) Snerdley asks, “How…? When did locking up criminals become anti-civil rights!” (Snort!) You’re forgetting the context. Leftists want prisoners released as evidence of civil rights. Civil rights is the guilty being let go.

Civil rights is the guilty being exonerated. Civil rights is the guilty being found not guilty. That’s in the modern-day makeup of the Democrat Party. That’s how you define civil rights. If they’re a minority, they didn’t do it because they’re disadvantaged and they were forced into it, they had no other hope. They had to do it, but that means they didn’t do it, and they did it because of Republican racism, and so that means they didn’t really do it so we’re gonna let ’em out of prison.

She didn’t let ’em out of prison. She’s flying in the face of the way the Democrats are trying to redefine civil rights. And in California — anyway, Gabbard calls her out on all this, and all hell has broken loose. Now they’re hiding the records.

Now, imagine if this story read a different way. Imagine the dateline is Washington: “IRS removes all records of Trump taxes and finances. A redesign of the IRS website will make it harder for voters to inspect the records of the Trump Organization prior to 2009.” Can you imagine? I mean, I know the IRS would not make things public, but I’m just using this as an illustration.

But there’s no concern in the Drive-Bys. I haven’t seen this story on Drive-By Media all day. That California is hiding, I guess so there can be no fact check. And, by the way, the judge thing is starting to turn around. Now, a federal judge on Thursday issued an order blocking New York state from turning over Trump’s tax returns to congressional Democrats for now should the house Ways and Means Committee request them through a newly passed New York law. Federal judge says you can’t do it. Not gonna let you do it.