The President Channels Me on California

RUSH: Now, ladies and gentlemen, I got a note last night. I was not watching the rally. When Fox comes in here to set up, it’s impossible — I mean, the TVs are off, stuff’s in the way of the TVs. I had to say, “Can we put one of the TVs back on?” And so we got it finally back on up there, but it was after most of the coverage of Trump’s rally was over. But that’s okay. No big deal. 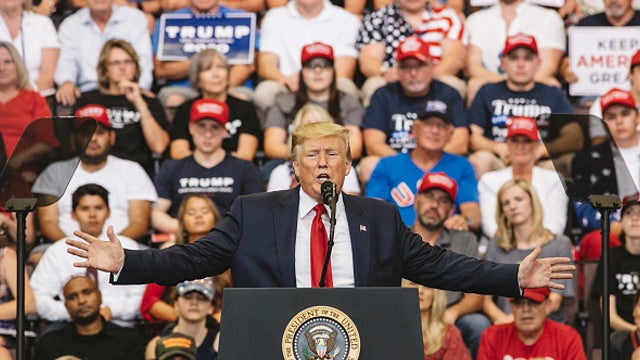 I got a note while this is going on from a very dear friend who said, “This is great. Trump is channeling you on California.” But that’s all the note said. I said, “I’m not watching. Could you tell me what you mean?” I didn’t get a reply. I didn’t hear the part of the Trump rally last night where he was supposedly channeling me on California. So I was unable to comment on it last night during yet another stellar appearance on Sean Hannity’s show on Fox.

So I get in here today and I find out what the note was about. And, indeed — remember, I was the first to say that I think Trump should go to California, even though California’s lost politically in terms of Electoral College votes, that Trump should still go there. And not go there to explicitly and only point out the homelessness in LA and same circumstance in San Francisco, don’t go out there to point fingers.

Go out there, take the message to California and remind everyone California’s a beautiful state. Folks, it’s a shame what has happened to that state. One-party rule is destroying that state in every which way you can imagine. Everything the liberals complain about is happening in spades. The wealth gap is wider there than you’ll find anywhere else in the country, maybe except for New York.

But it’s close between the two. You have rampant homelessness. You have fully one-fifth of all homeless people in America are in California, and a lot of this has been brought about by open-borders immigration. The Democrat Party with no opposition, no checks and balances, is in the process of destroying the state of California for a lot of people.

And the reason to go is – look, I don’t think Trump’s speech, if he ever did this, would be to point out what’s going on in skid row in Los Angeles, homelessness near the LA Police Department. You could do that, but that’s not why go. Take the message of what’s happening in America to California.

They don’t know. Their media’s as one-sided and unbalanced as everything else is in California. Just take the message there. Everybody else has written California off. Trump is the exact person not to write it off. Well, I get this note last night, “He’s channeling you on California.” So I said, “What is this about?”

And here it is, basically: “Trump Rips California Democrats for Destroying San Francisco and Los Angeles.” This is his Cincinnati rally. He told people “that Democrats had mis-governed many big cities — especially in California. He said, ‘The conditions in Nancy Pelosi’s once-great city of San Francisco are deplorable. They’re deplorable. Do you remember the word “deplorable”? Do you remember when Hillary used the word “deplorable”? … “Deplorable” was not a good day for Hillary. “Crooked Hillary.”

“‘She is a crooked one. She is crooked,'” and the crowd started chanting, “Lock her up!” But then Trump continued. He said, “Nearly half of all the homeless people living in the streets in America happen to live in the state of California.” Oh, it’s half? Okay, half. “‘What they are doing to our beautiful California is a disgrace to our country. It’s a shame. The world is looking at it. Look at Los Angeles, with the tents and the horrible, horrible, disgusting conditions. Look at San Francisco. Look at some of your other cities.

“And then you have a governor… You have a governor that invites the whole world to come into California, ‘We will pay for your health care, we’ll pay for'” whatever you want. The citizens of California will give you whatever you want if you come here illegally. “And then you wonder why so many people are coming up. They’re coming up because we are the hottest economic country in the world, but they are also coming up because you have people like that governor saying, ‘Come on up! We will give you health care.’ 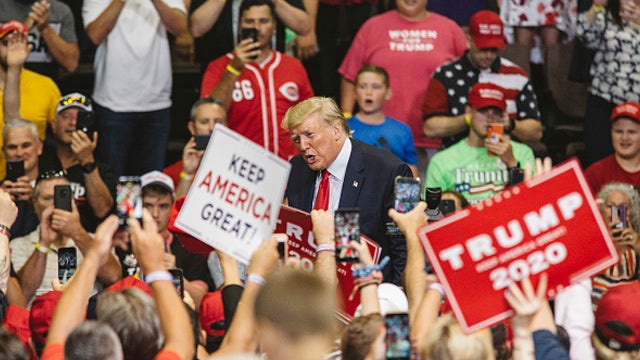 “Who wouldn’t come up? Who wouldn’t come up? How crazy is this? How crazy is this?” So now I understand why I got the note, “Trump is channeling you on California.” I think this may be a prelude to Trump going there, folks. I actually think that it may be something they’re thinking, ’cause really it would be… Trump going to California once a month or for a rally, particularly during the election season… Do you know precisely because there’s no chance of winning California is why it would shake up the conventional wisdom Washington establishment?

These people all think alike, they all believe the same thing, and one of the things they believe in is you do not waste money where you have no chance of winning. You allocate resources in swing districts. You allocate resources in places that you can prevail and win. California’s a lost cause. The Democrats look at it that exact way. Democrats don’t need to fix California. It’s a sitting duck in terms of opportunity, because the Democrats have to ignore it. The Democrats can’t complain about California.

The Democrats can’t complain about Baltimore. It takes Trump to do these things, and only Trump can do these things. Other Republicans are free to join him if they want, but he pretty much is the Lone Ranger on this stuff. But precisely because the Democrats can’t talk about it without incriminating themselves. It’s their state! The Republicans have zip, zero, nada presence there. Whatever’s gone wrong in California, you cannot attach any blame whatsoever to any Republican, individual or party.

The Democrats own everything.

They have not been able to stop Trump’s spread of his message. They have not been able to dilute it or to water it down. They are perfectly content for Trump to stay out of their — quote-unquote, “their” — states and areas. So keep a sharp eye. I don’t think it’s outside the realm of possibilities that he will do it. Trump also said of Biden, the poor guy “has no clue what … he is doing.” He “ripped [Biden], asserting that he would be terrible at negotiating with China. He said that China likely prefers a Democrat president in the next election.

“‘They would love to see a guy like Sleepy Joe…'” Is this not a nice turn that the ChiComs now want a Democrat? Here we go from (laughs) the Democrats attempting to claim that the Russians colluded with Trump or vice-versa, to now Trump’s turning it around and claiming the ChiComs want Sleepy Joe! They can’t keep up with him. As hard as they try, they are not gonna be able to keep up with Trump on this. By the time they think they’ve got a response to something that Trump has said, he’s off and running on something new.