RUSH:  While you’re not looking, the ChiComs have really amped up the trade war.  They have devalued their currency.  That has stock market eager beavers just spooked to all get out, and they have put a screeching halt on agriculture imports.

RUSH: This ChiCom trade war news is worth you knowing in the midst of all the societal rot that’s happening in America. The ChiComs have responded to Trump’s threat to increase tariffs with another escalation of the trade war today. They have devalued their currency. They haven’t taken it to the level it’s at in 10 years and this is something Trump has been on their case about since he was campaigning and that is the devaluation of their currency and how that leads to a tremendous imbalance of trade. 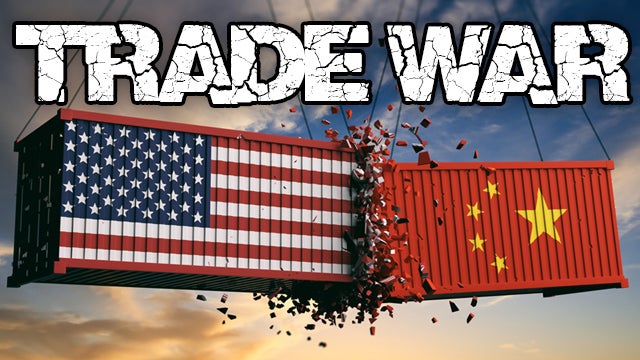 Now, this is a MarketWatch story. It says the moves antagonize Trump, who used Twitter to accuse the ChiComs of currency manipulation, which will greatly weaken China over time. He’s repeatedly criticized Beijing for not keeping promises to buy more U.S. crops, and this is what’s caused the stock market volatility today. It’s down 716 points at the moment on the Dow.

It never fails. I think they just copy and paste this stuff. And they create panic among people that call their broker or call their asset management firm, “Oh, my God. The media says…” And the asset managers, the smart ones, say, “Ride it out. How many times have we been through this in your life, ride it out. Where’s the market net high in all these years? It scored a record recently, right?” If you’re old and you need the money out soon, that’s a different thing, but just the cyclical nature of this.

You know, Holman Jenkins of the Wall Street Journal had a column over the weekend on how hapless the Mueller investigation was because it did not investigate the veracity of the Steele dossier, that nobody did, that everybody just accepted it and ran with it, and then he focuses on the media. He says the media really has some questions to ask.

Now, he maintains that the media does what it does not because they are biased, which I disagree with profoundly, but rather than paraphrase it, let me find and actually read his — here it is. This is what he says. ” News consumers might marvel that so many journalists at least are so devoted to their partisan allegiances, but devotion has nothing to do with it. It’s just dumb conformism and lack of imagination. As in any field, one learns not to be surprised that so many unprepossessing persons are in positions of authority.”

Now, as I say I think there’s truth to that to a certain degree, but I don’t agree that there isn’t any bias, and I don’t agree that there isn’t any leftist ideology. The leftist ideology is the foundation. The conformism is to that. But I do get what he means when he talks about lazy conformism ’cause these stock market stories are nothing but repeats, lazy conformism.

Lazy in the sense that every stock market decline is treated identically. “It’s the end. You’re gonna die. You’re gonna go broke. You better get out.” Accompanied by stories of the uber-wealthy selling stocks and buying gold or buying real estate, making you think you’re gonna be left out.

Now, if it was unique, that’s one thing. But it’s the story every time there’s a market plunge. And then you add to it there is the ever-present fatalism, apocalyptic tone, disaster is right around the corner, which, as I addressed so adroitly on Friday, sells. And yet I don’t engage in it. But everybody in the media, a lot of people do. Because they think it works. And that’s what we’re seeing now.

We’re seeing the apocalypse, we’re seeing it’s over with, Trump’s gotta stop it, this or that, America’s finished. And I think it’s wearing people out. I really do.

RUSH: By the way, the ChiCom government is mobilizing right now on the border with Hong Kong. The people of Hong Kong may be on the verge of having a totally new definition of freedom visited upon them, and I don’t know how many people in Hong Kong have guns, but this could be a good illustration of why it’s not wise to have the only guns in distribution in control of the state.

But ChiComs loaded for bear here. I guess they’re willing to have their people starve. They have lowered their currency, devalued it, and this in response to the Trump additional tariff threat. And they’ve also threatened to stop importing all American agricultural products. So they’re content to let their people starve. Where they gonna go? We feed the world. Where they gonna go? This is what happens when you don’t really care about your people except from the standpoint of making sure they work and produce what they’re supposed to each and every day.