RUSH: While all this is going on, while Trump is a white nationalist, do you know what conservatives in Baltimore are doing? They’re cleaning up Elijah Cummings’ district! Two stories here. Gateway Pundit is one, and the Baltimore Sun is the other.

Baltimore Sun: “After Trump’s Tweets, Conservative Activist Leads Neighborhood Cleanup in West Baltimore.” There are 10 photos in this story showing the massive amount of cleanup and garbage removed by this group working with somebody named Scott Presler.

Thank you to the over 170+ volunteers who helped pick up trash in Baltimore.

We were out from 8 a.m. – 8 p.m. & picked up over 12 tons of trash. #AmericansHelpingAmericans pic.twitter.com/t0JqOouKxF

The thing that… Why do a bunch of conservatives have to go into Elijah Cummings’ neighborhood to clean it up? Cummings told us 20 years ago how drug-infested it was. So here are conservatives trying to show they’re trying to help. 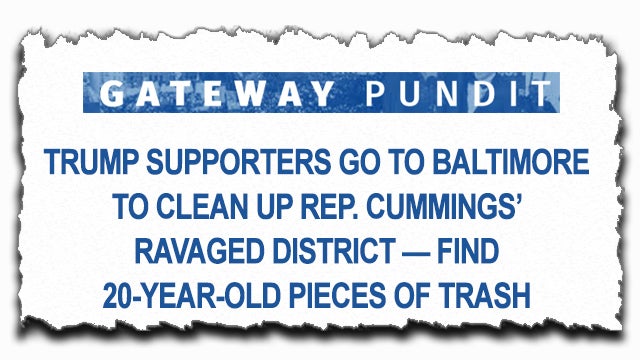 Gateway Pundit: “Trump Supporters Go to Baltimore to Clean Up Rep. Cummings’ Ravaged District — Find 20-Year-Old Pieces of Trash,” as in 20-year-old newspapers that have been thrown in the streets and still not cleaned up. “Yeah, these white supremacists. But of course they don’t mean it, you see! They’re white supremacists and they’re very smart. They’re trying to cover up their white supremacy by going and cleaning up Elijah Cumming’s district.” Why do people outside the district have to go in there and clean it up? And then when they do, they of course get savaged and ripped to shreds as being insincere.