RUSH: Now, the mayor of Dayton had a press conference just as this program was beginning, and I understand that our Dayton affiliate had to break away from the program to cover the Dayton mayor, and I don’t know how many other stations in Ohio that carry the EIB Network also broomed us to cover the Dayton mayor. You would understand it. We did not break away because… Well, a host of reasons, most of them broadcasting. But we leave a 20-minute hole for stations that replay this program, say, over the weekend or something.

We have to give them three solid hours here unless there’s something of national import, such as a presidential statement or press conference or something. Now, Nan Whaley went out there and did a press conference. She got a question from a reporter. “After the president’s remarks wrapped up yesterday” where he condemned white supremacy, “what was the first thing that went through your mind when he addressed the nation about the shootings and also when he addressed the people…?” 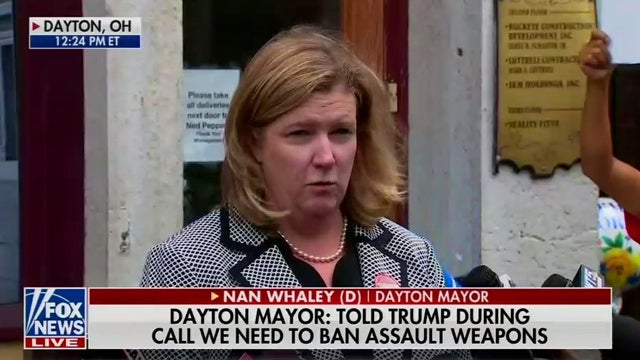 WHALEY: Of Toledo? Yeah, uh, look, I’m disappointed with his remarks. I mean, I think they fall — fall really short. He mentioned, like, gun issues one time. Ummm… (pause) I think, you know, watching the president over the past few years on the issues of guns, he’s been… Umm… I don’t know if he knows what he believes, frankly. My immediate reaction is, like… Ummm, people from the coast never understand Ohio, and they think all Ohio cities are the same.

RUSH: Okay. So she’s lumping Trump in with the people from the coasts. He had a misspeak, said Toledo instead of Dayton. She’s offended by that. It’s not as bad as Biden. He got both places wrong. He thought El Paso was Houston and the Dayton shooting, I don’t know where he put it, but he was nowhere near it, geographically. But he makes so many gaffes, nobody calls him out on it anymore. They just laugh. “That’s just Old Joe!” But she’s disappointed in Trump ’cause he (impression) “Only talked about the gun issue like, um, uh, once.

“You know, like, I think, uh, watching the president, um, over, like, you know, the past few years on the issues of guns, he’s been, um… Oh, I don’t know if he knows what he believes, frankly.” (chuckles) Let me tell you something, Mayor Whaley. She’s Democrat, by the way. Mayor Whaley, if there’s one person in this country who you do know what they believe, it’s Donald Trump. He’s the one guy who does not sugarcoat or camouflage or try to trick people into not understanding what he believes!