CNN Priest: Jesus Was Against Nationalism — and Walls

RUSH: Now, I want to go back to some more sound bites that I have been collecting during the week because the day they came down the pike there were other things that deserved more attention, such as the aftermath of the shootings over the weekend in Dayton and El Paso. But these are highly worthwhile. They’re extremely valuable. They are perfectly informative. 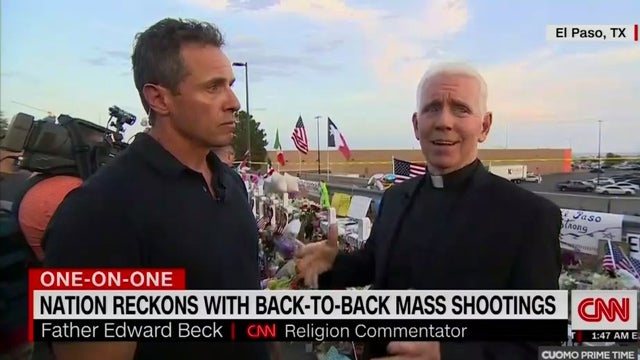 How many of you run around saying, “Yeah, I am a proud white nationalist, boy, and I want you to meet me.” Doesn’t happen! There aren’t any! There aren’t any white supremacists except way on the fringe in the dark web where most of us wouldn’t know how to find ’em if we wanted to. Because they’re hiding! They are not representative of anything. They are as despondent and out of it as wacko fringe leftists are. Except there are far many more wacko fringe leftists than there are white supremacists.

So you can say about them whatever they want. The fact that they’re Christians, why, that makes it even better to hit ’em. But who in the world talks about themselves or their friends as white nationalists? This is why Tucker Carlson this is a hoax. There isn’t a group of people running around talking about themselves this way. 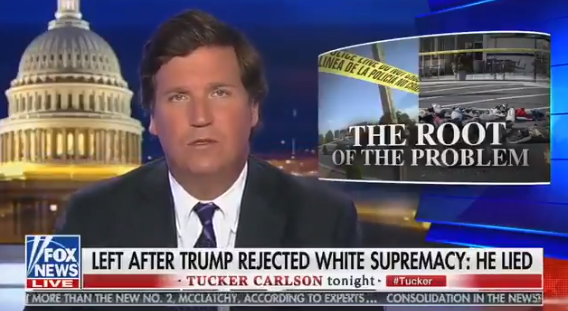 BECK: That is a contradiction in terms. You can’t put “nationalist” and “Christian” together. Jesus was definitely not a nationalist. The very essence of Jesus is crossing borders, going to the Samaritan woman, going to the stranger. I mean, how can you put Christian and nationalism together? Nationalism says my country is better than yours, my race is better than yours. That flies in the face of everything Christianity teaches.

It has nothing to do with supremacy! Nationalism exists because we have a bunch of anti-Americans trying to retransform this country away from its greatness and founding. The nationalists want to preserve it. There’s nothing about supremacy in this. And yet here’s a man of the cloth, a man of God who doesn’t even know the definitions of the terms that he is using. “Jesus was not a nationalist.” Whoever said that he was?

“Jesus is the very essence of crossing borders”? Yeah, Christmastime, Mary and Joseph are the essence of homeless people. Mary and Joseph were homeless just like the people living in skid row in LA, and that’s why you can’t criticize them because you can’t criticize Mary. Why, the next Jesus could be living in skid row. We don’t know. These are a bunch of sick, sick puppies.

“Going to the stranger, going to the Samaritan. How can you put Christian and nationalism together?” Well, does a Christian believe that he’s better than the Islamist? These people, everything to them gets reduced to political combat. Everything. So they set out to destroy the word “populist.” They want to demonize that. Now they’re trying to demonize “nationalism” by putting the word “white” in front of it to give it a meaning that nobody attaches to it. 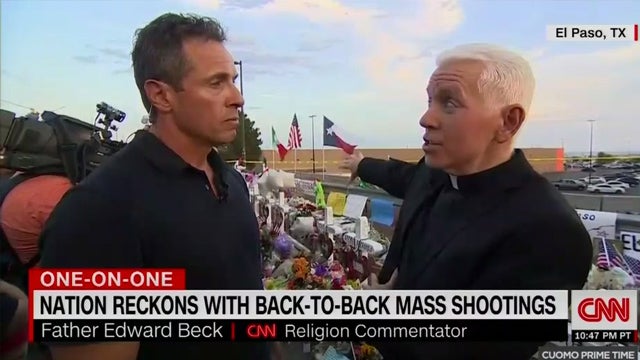 Why is wanting America to be great again some kind of racist existence? Or racialist existence, or why is white supremacy attached to America being great again? The two have nothing together, unless you have a jaundiced, perverted view of this country to begin with, like these leftists and these clerics apparently do.

You learn a lot listening to these dummkopfs, folks. “It’s a contradiction of terms. You can’t put nationalist and Christian together. Jesus was definitely not a nationalist. The very essence of Jesus was crossing borders and going to the Samaritan woman, going to the stranger. Nationalism says, ‘My country is better than yours.'” No, it isn’t! It’s not even close to saying “my country is better than yours.” It’s not what nationalism is. So Fredo says, “Well, okay. Where is the spirituality right now in this country? What do we fall back on if we can’t fall back on any of that stuff?”

BECK: I think Pope Francis has said we do not build walls. Christians build bridges. You can’t call yourself a Christian if you build walls. After the resurrection of Christ, Paul writes to the Galatians, “there is no longer man or woman, Greek or Jew, slave nor free. All are one in Christ Jesus.” So all of those divisions we’ve tried to create with our racism and our xenophobia, Paul says that’s — can’t exist with Christ. 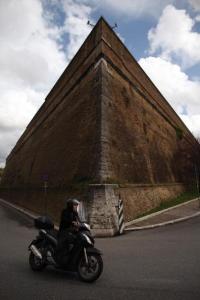 RUSH: The biggest wall in this world outside of the Great Wall of China surrounds the Vatican. Have you ever been there, folks? There is a gigantic wall around the whole place. It’s a nation place, and the whole place has a wall around it with checkpoints, entry points, Swiss guards, security. It’s where the Vicar of Christ lives, and there is a wall there! What would Paul say?

“After the resurrection of Christ, Paul writes –” I’m surprised CNN guy didn’t get rid of the guy after that. “What do you mean, resurrection of Christ? What do you think this network is?” But they let him continue. “There is no longer man or woman, Greek or Jew, slave nor free. All are one in Christ Jesus.” Okay, I need to ask this. Who is it trying to run Christ out of America? Who is it trying to run Christ and God out of the schools and out of the public square? Who is it? It ain’t us.

The very people that say only with Christ can you have no Greek and no Jew and no man or no woman, only in Christ can we all be the same and identical and so forth. Also it’s kind of distorted. The very people trying to get rid of Christ, trying to get rid of God make us wonder why, if he’s this wonderful, if things would be this wonderful with God everywhere in America, why, imagine. If there were God, there wouldn’t be man or woman and we wouldn’t need feminism! There wouldn’t be Greek or Jew, and we wouldn’t need borders! There wouldn’t be slaves or free people. Everybody would just be, if Christ were everywhere in America. But who is it that will not permit that?

Let’s have a flashback of this guy, shall we? Edward Beck is his name. He was on CNN back in January. Whoops. Gotta take a break. Just saw the official program clock. Hang on, folks. There’s one more. Wait ’til you hear what this guy said about the Covington kids.

RUSH: Okay. Here we go back, January 22, 2019. Sorry. This is the CNN religion analyst, Father Edward Beck, who we just heard say that the very essence of Jesus is crossing borders, not nationalist, nationalism that says, “My country’s better than yours.” This… You know, that enrages me. To be that wrong — purposely that wrong, that misleading about something — and that there’s not a single person in journalism that can correct the guy.

There’s not a single person on CNN that can tell him he’s wrong about it! Anyway, January 22, 2019, Brianna Keilar was the infobabe, asking Edward Beck, Father Edward Beck about the confrontation between the Covington kids and the Native American out there at the March for Life. She said, “You said that they shouldn’t have allowed those boys to wear Make America Great Again hats on this field trip. They shouldn’t have been permitted to wear those hats. Tell us why you think that, Father.”

BECK: The students acted inappropriately. I was raised at a time when we were taught respect your elders. With regard [to] the hats, the hats that they were wearing — the so-called MAGA hats or “Make American [sic] Great Again” hats — come with a certain political agenda that, in my opinion, can be seen as anti-Catholic, anti-Christian —

BECK: — ’cause abortion is not the only pro-life issue. What about immigration and the migrants? What about capital punishment? What about the environment and climate change? And so by wearing that hat, it’s saying that you’re aligning yourself with a political agenda. The students had no right to be wearing that hat. Wear a school hat.

RUSH: Wait a second! Who in the world is this guy to be able to determine who has the right to wear any hat at all? They were on a field trip with their school! They were minding their own business! They were accosted by that Indian guy beating on his war drum. They didn’t attack anybody. To attach a political agenda? But who cares! You know, there’s not a person that’s gonna tell anybody in Black Lives Matter to stop wearing their T-shirts or caps. I mean, this guy’s gonna applaud Antifa’s rights to do whatever they do.