RUSH: I think there are Trump supporters that used to be just ambivalent about him but didn’t like Hillary Clinton, and now I think there are Trump supporters who really actively didn’t like him but now do because of the results. Now let’s go to the Frank Luntz. Frank Luntz is back. Frank Luntz appeared on the Fox News Channel last night with Laura Ingraham on The Ingraham Angle (which is hypotenuse), and the question was, “Is the Trump-racist talking point working, Frank? Is it reaching and affecting the views of a large number of Americans?” 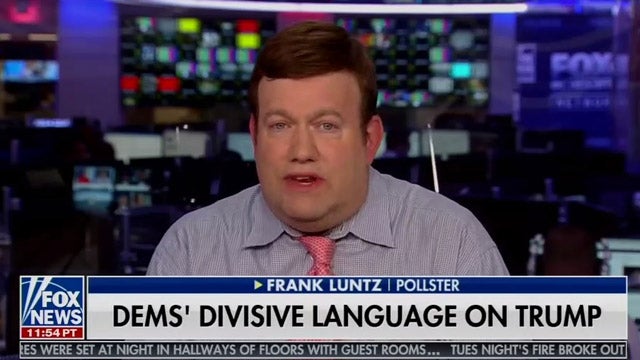 LUNTZ: It is affecting the views of a large percent of Americans, and you know how? It’s turning people off against the media. That’s not their job. Their job is not to label. Their job is not to condemn or criticize. Their responsibility is to present the language as it is used, to present… Nothing wrong with showing his tweets. He wants it. Nothing wrong with showing quotes from the speeches. He likes that. All candidates do. But when you start to become a commentator and you try to move people to judge the president before they hear what he says, that’s too far, and it is why the media has the lowest level of credibility at any time since they started polling this issue more than half a century ago.

RUSH: Okay, will you Republicans listen to this finally? This is good for you Never Trumpers and establishment Republicans and GOP donors and CEOs facing fake boycotts! It’s a good thing for you to hear and to believe this. Luntz is polling; he’s finding the media is only hurting themselves, not you. They’re not hurting Trump. Folks, the evidence is everywhere that none of this is working as it appears to be if you watch or read the Drive-By Media.

Let’s go down to sound bite 21 this morning, Fox & Friends. A Trump donor, CEO of MidAmerican Aerospace Mark Hanrahan. He’s one of the guys that was doxed by Joaquin Castro, Democrat-Texas. He ran that ad doxing all these supposed Trump donors. Joaquin ended up outing a bunch of his own donors as well as his brother’s. So Pete Hegseth, who was wearing the bright red socks today… You know, that’s a new style out there, bright red socks, black slacks, maybe, you know, a red bow in the hair.

Anyway, Pete was out there. He said, “Was the intended impact had on you? Are you now gonna run away from Trump? Have you had it with all this?” 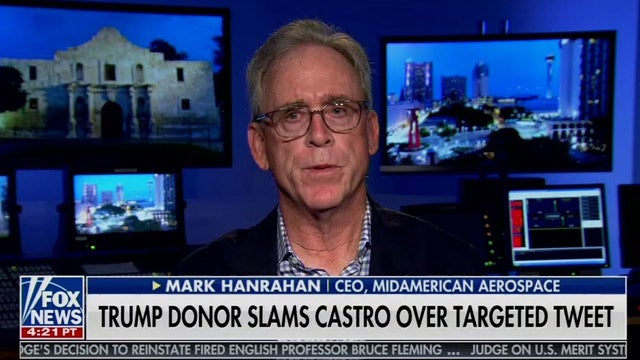 HANRAHAN: I just was angered by the fact that anybody would… I mean, being outed as a contributor wasn’t the problem, but tying me to that horrific tragedy in El Paso was galling. It just made me sick to my stomach. I’m not free to support or think what I think is, and to be bullied with slurs of racism is just… I think a lot of people of my generation that support the president are tired of it.

RUSH: Bingo. This is exactly the needle I threaded yesterday. So here’s a guy, he’s fed up — and this is something for Trump to bear in mind. When Trump is called all these names, everybody who voted for him is too, and this guy said it well. “I am stick to my stomach of being linked to these mass shooters! Just because I participate in the political process. Okay. So I donate to people. I didn’t even know this guy that pulled the trigger! I’m responsible for it? This is a slur. This is racism. We are sick of it! Every Trump voter is sick of this.

This is why I said yesterday I really think that there aren’t that many, quote-unquote, “GOP voters.” There are Trump voters. Trump’s approval rating with Republican voters is well over 90%.