Taking a Look at the Greatest Generation

RUSH: Here is Mike in Orlando. Great to have you, sir. Welcome to the program.

CALLER: Thank you, Mr. Limbaugh. It’s a great honor to speak to you. I’ve been listening since 1991. And, you know, for years we’ve been hearing — and a lot of people agree with it — that the World War II generation is the Greatest Generation, and not to sound too provocative, but I would argue that they are definitely not the Greatest Generation for a number of reasons. But a couple of reasons, one is that they elected FDR four times, I mean, come on.

They gave us Social Security, a great socialist program. They also gave us the first federal legislation on gun control, which was extremely restrictive and caused all kinds of other issues with that. And then lastly, and I think the most important thing, is that they gave us what I think was potentially the worst generation besides the Millennials are the Baby Boomers, which gave us, you know, illicit drugs, sex, rock ‘n’ roll, abortion in the seventies. And I would really argue that the pioneers and the founders are probably the Greatest Generation for this country.

RUSH: The pioneers and the founders were the Greatest Generations?

RUSH: Okay. You know, I’ve heard this, and look, you have some points. Let’s go back and review why they are considered the Greatest Generation. I can tell you exactly why, because, frankly, my friends, I gotta say this very quietly, but I think the whole concept of the Greatest Generation and the book about it was stolen from this show. ‘Cause I did a very long monologue on this.

I didn’t necessarily call them the Greatest Generation. I referred to them as the World War II generation, and it was in a conversation about how quickly they all had to grow up and face genuine adversity over and over and over again, whereas their kids, me and their grandkids, some of you, have had it so comparatively easy that we’ve had to invent our traumas.

And I reviewed, starting with the Great Depression, moving forward, which was a formative event — everybody that lived through that, there’s nothing — the financial crisis of 2008, nothing, nobody alive today can possibly relate to what life was like during the Great Depression. My dad was born, you know, 11 years before. Dad lived through it, my grandfather — it was the formative event. It determined how they raised their kids. It was the source of all financial values that responsible parents tried to instill in their children.

Now, my parents and grandparents, having lived through the Great Depression. My grandparents having experienced World War I, then we move forward to the FDR years that have been cited here, which for Republicans were not great years, then we have World War II, then we’ve got Korea. By the time Khrushchev came along and was promising this stuff, my parents and grandparents took him seriously. They couldn’t afford not to, after what they had already lived through.

I’ll never forget my paternal grandmother being livid at Khrushchev. Now, if a communist today like Hugo Chavez goes on TV and starts threatening the American people, it will be a Saturday Night Live skit in three days. Nobody takes it seriously. But back then, folks, I’m telling you, they took it seriously and they believed every syllable. Now, hang on. Don’t go away.

I don’t care what we faced; we haven’t faced — now, see, this is the thing. Things are relative. There are people alive today who think that climate change is the same thing, and that’s what so irritates me. We had to invent all these traumas. We had to invent all this hardship to tell ourselves that our lives have been fraught with challenges and fraught with adversity that we’ve had to overcome, and nothing will compare.

We’re never gonna have warfare like we had in World War II again, what with technological advances that exist today. We’re not gonna have to deploy troops to accomplish things that it took in the 1940s to accomplish. But my only point was that for most of their lives, they had to deal with things that told them very early in their lives that there were things much larger than themselves. They didn’t have time to focus on me and my and feelings, self-esteem. They really didn’t. 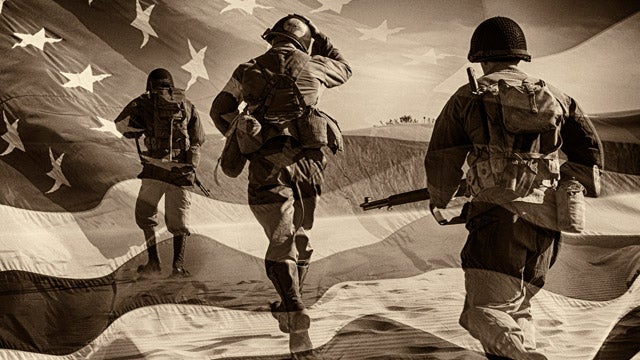 The moniker the Greatest Generation happened to be given by Tom Brokaw who wrote a book. That book is so — I mean, I felt like I had seen a lot of it before. Now, as to the caller’s point, did they create all this welfare state stuff? Yes, that happened with the same group of people. They did elect FDR four times. He was trying to pack the Supreme Court.

But it wasn’t the entire generation that came together. It was the Democrat Party that was largely in favor of the expanding the size and scope of government, welfare state, and so forth. My point was never to claim that they were the greatest, best, what have you. I just wanted to basically draw the comparison.

Hillary Clinton, I remember when she was in her forties or fifties was running around bragging about how she had recently learned that there’s more to life than just ourselves. I said, “Hillary, your parents learned that when they were 16. They had no choice but to learn it when they were 16!” But Hillary Clinton, the rest of us were allowed to grow up, focused on our feelings, ourselves.

I’m 68, and folks, when my parents and their friends were 68, believe me, they were 68. They had lived a lot of life. They had been through — I’m 68 and there are days I think I’m not even 21. Other days I’m not even 30 yet. And I think a lot of you are like me in that sense. When we were growing up, 68, man, you were getting close to the end. Nobody at 68 thinks they’re anywhere near the end today, and they’re not, according to life expectancy tables, anyway.

And I think one of the reasons is — and I’ve said this before. I think one of the reasons is that we’ve had it relatively easy. Now, this always makes people mad because they think I’m calling ’em a bunch of softies. I’m not. I’m engaging here in real side-by-side comparisons. My parents may have had PTSD, but they didn’t know about it. Nobody had ever invented it. They may have had ADD, but they didn’t know.

In other words, they didn’t know these things to use ’em as a crutch for anything. They just lived their lives. There was no thing as ADD then, no such thing as PTSD, and any other abbreviated names for mental shortcomings or emotional shortcomings. But we, our generation did what? Why, we identified those things. And why did we do it? To tell ourselves that life was not easy. To tell ourselves that we, too, had challenges and excuses.

That’s the most important one. “He has PTSD, that’s why he beats people up. Yeah, went to Vietnam, everybody knows it.” There wasn’t any such thing. It may have existed, but it had not been identified, diagnosed, and it wasn’t labeled, so people that had it could not rely on it as a crutch. They just dealt. Like every generation before them, they just dealt with life as they encountered it because that’s all they had time for.

Let me put it to you this way. If the nation were challenged on a similar level as we were in the 1940s — and let’s throw the Great Depression in there — as you look out over the landscape of America, do you think that we could rally? Do you think the nation could rally to defend the country against whatever assaults, or have we gotten to the point where half the country would agree with the allegations and join the accusers?

I realize to some of you I may as well be speaking German. “What’s he talking about? What’s this guy on the radio talk about right now?” That’s generational evolution. Not much you can do about it. Things change. Nothing stays the same. Gotta be able to adapt. But still, to me, they’re interesting side-by-side comparisons.

And now look at the Millennial generation today, which I would contend to you, look, one thing I understand. Things are relative. And if you’re experiencing stress in your life, you’re experiencing stress. It’s real. Whether you’re making it up or whether somebody’s creating it for you, still real. I’m not denying that there’s stress. I’m just suggesting that a whole lot of it is man-made today, as opposed to it was really real back then.

Look at the number of Millennials today who really believe that there’s little chance they’re gonna live beyond the age of 40 because of climate change. And they’re stressed out. We have a very expansive, growing economy, and yet they’re still stressed out. There’s no German or Japanese or Russian enemy, although there is, they just don’t recognize it. Islamist supremacy, Sharia law, they don’t recognize that. They think the enemy’s us, folks. But if you’re faced with this possibility: Your avocado toast is burning or the Germans have taken over Manhattan, what’s gonna worry you the most today?

RUSH: I did. I just got a note. “Rush, you’re brilliant. But I just have to tell you, you missed it. I would be worried if my avocado toast were organic more than I would be worried that the Germans or anybody else had taken over Manhattan. I mean, after all, how bad could that be?” Yeah, I should have used a different place.