The team also won a gold medal in another fencing event. So fencing, sword fighting with rubber tips and masks. The Pan Am Games. Didn’t even know this was happening, but we do now, thanks to a very dramatic and colorful photo and back-to-back interviews of this pretty white boy by all of the Drive-Bys. I don’t know his name, I haven’t read long enough, farther in the story to find out his name, don’t want to know his name. I don’t want to hear his reasoning for acting like this. 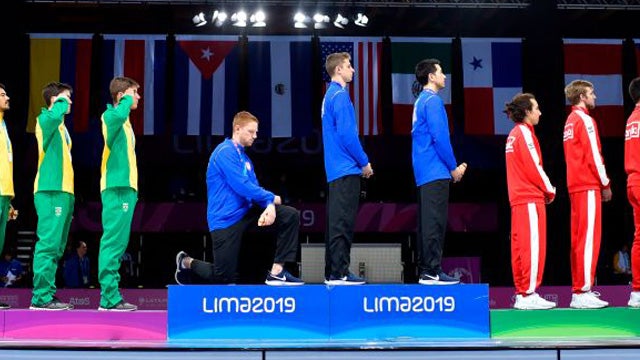 And this guy, you know what he’s decided? The heck with angering half the country. The deal now is to get the support of half of the country. And if the half of country that hates America is where you want to go get support, then you gotta act like you hate America to get that part of the country. This guy has decided, he’s banking on at least 30, 40% of the country agreeing with him and some corporate entity to sponsor him.

So see, folks, we’re no longer even Democrats and Republicans. We are Americans and anti-Americans. That’s the dividing line. Anybody see a flag at the Democrat debate? Was there one? I don’t remember. But they have this new mascot now. The fencer from the Pan Am Games who refuses to stand for the anthem.