An Immigrant Tells Us Why She Supports Her President

RUSH: This is Luba. Luba is in Rochester, New York. You know, I once had an anesthesiologist named Luba.

CALLER: She must have been Ukrainian. (chuckling)

RUSH: Yeah. You remember a name like Luba, and she was very, very nice; very professional. I’ve never forgotten her because of the name. So it’s great to have you here. You’re in Rochester, New York, right?

CALLER: Yes, I am. I want to tell you real quick, “Luba means love,” but the love I am sending your way today is I thank you and I thank President Trump for giving us the truth. And I hate the left. I think they are mentally ill. They really have some mental issues going on, and I sure wouldn’t want any of them to be guiding our country.

RUSH: Yeah, I know. I share your frustration at that and how to deal with it.

CALLER: And I’ll tell you, I love you very much. I’ve been listening to you for a long time. I’ll give you my story: The green card deal that’s going on now? I truly believe in that. In 1960, my parents and I and my sister flew in from Sao Paulo, Brazil.

RUSH: Let me jump in for a minute just to tell people what you’re talking about. She’s talking about the public charge bill. The president announced yesterday that green cards are only gonna be given to people who can take care of themselves. We’re not gonna let massive cases of welfare dependency into the country. Of course, the left is fit to be tied over this because that’s what they need.

RUSH: They want those kinds of people here. It’s mind-boggling. So Luba here is calling, I’m sure, to express her disagreement with what the Democrats want to do. You’re in favor of what the president is doing, right?

CALLER: Absolutely, and it goes beyond that. Rush, I’ll tell you, in 1960 when we came, we had to be sponsored by a family in the U.S. before we came. The family had to be legally responsible for us — financially, food, housing, and everything — and it took a long time to go through the process. My parents spent a lot of money coming here, and within the time they came here, both of my parents — who did not speak English, nor did I. They got jobs within three weeks. My mother worked as Benks Clothing as a seamstress and my dad was a welder. We never took public assistance. The immigrants of yesterday are much different than immigrants now. You don’t just walk into the United States. I came here legally. I got my citizenship. When I got my citizenship, Rush, I swear to you, I cried like a baby.

CALLER: I was so proud. And I love our country. I love it. And I think Donald Trump is the best. And he’s doing everything to clean up a lot of filth, even off the sidewalks.

RUSH: Does his tweeting bother you at all out there, Luba?

RUSH: Does his tweeting bother you at all?

CALLER: (pause) No, not really, because you’re a lot like him. You tell things like they are. You don’t have to wonder what he’s thinking or what’s behind his statement. He’s a very honest person.

RUSH: All right. Now, I asked that question for a reason, folks.

RUSH: I want to explain it to you. Here’s a woman who came here legally. By the way, 1960. Her arrival predates the current phase of immigration law. Ted Kennedy. She came here in 1960 when we had effectively shut down immigration. You heard how she had to do it. She had to have a family sponsor her. She had to go through all kinds of hoops to get here. It was not easy. You just didn’t show up. We had shut down legal immigration for the most part. There were exceptions. It’s never been a flat-out zero. But from the 1920s to 1965 there was none, for all intents and purposes. 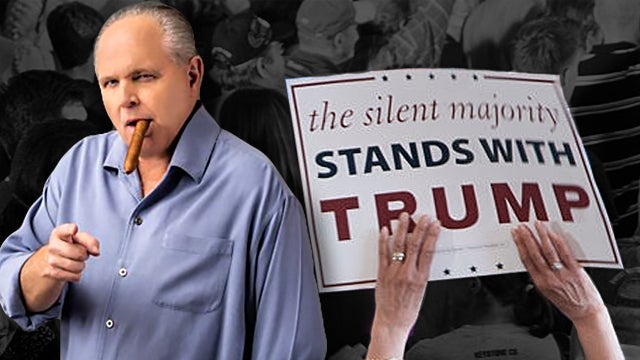 The modern immigration law that we’re dealing with today dates to 1965, when Ted Kennedy realized what was happening. There weren’t enough replacement Democrats coming into the country via immigration. So we got it ginned up again. The reason we stopped immigration for those 40 years was to allow the immigrants who had come prior to assimilate and to become Americans. It was not a pejorative back then to become Americans. So here’s Luba, and she comes during this period, and it means the world to her that she came here.

She takes it seriously to this day. It’s one of the standout moments of her life to become a resident and citizen of the United States. She loves Donald Trump. She, to me, is probably the epitome of your average American Donald Trump voter. She’s an average American going through the day living life as an American and keeping track of the things that matter. So she’s in the middle of her spiel here, and I asked her if Trump’s tweets bother her.

Now, if you listen to the Drive-By Media and if you listen to Anthony Scaramucci, if you listen to all the Republicans, they (sobbing), “Oh, my God. These tweets are gonna embarrass us! Oh, my God. The president (mewling).” She’s unfazed by ’em. But she didn’t give a blanket, “No way! I support the president.” She paused. “Well, I don’t know,” and she came down on the side of Trump is serious. Se believes what Trump is saying, she knows how he speaks, and she’s not offended by it. But it was a knee-jerk, blanket support of statement for Trump.

It was something she considered when I hit her with that out of the blue — purposely, because I think there is such a disconnect between people in this country over Trump’s presidential tweeting and his behavior versus the people in Washington and professional politics who are just… (sigh) They’re just driven insane by it, and they think it’s so bad and it’s bad for America and it’s bad for the presidency. Here’s a woman to whom being an American is not something she takes for granted. It took a lot of effort.

She has an ongoing, daily appreciation for it. So Luba, thank you, and I’m honored that you’re in the audience and that people like you are out there. Now, on this public charge business. We talked about this yesterday at great length. What Trump is doing is changing the public charge immigration rule that has been on the books. Public charge has been part of U.S. immigration law for more than 100 years. Do you know this? You probably don’t know this! So I am happy to be the one who imparts this to you!

Public charge has been part of U.S. immigration law for more than a century as a ground for admissibility and deportation. To get into this country, you had to be able to stand on your own two feet. You had to be able to demonstrate that you could provide for yourself — and, consequently, you could be deported if you ever failed to be able to do so! We used to have these strict regulations. Do you know why they were this way? Because this is a special place! It’s made up of a special kind of attitude and culture.

Back when people were unified about this, there was an effort to maintain it. It was not pejorative to be able to take care of yourself. It was not insulting. It was not an attempt to demean those who couldn’t. It was simply a standard, it was a requirement, because it was part of the definition of a great country. It made all the common sense in the world. But today, that’s out the window, and it’s been replaced by endless sympathy and compassion for the opposite, for people that can’t take care of themselves. But that would be okay if we had a program designed to help them escape that!

That doesn’t fly, either. But we’ve gone so far the wrong way now that our compassion extends to people who can’t and who won’t, and we bring ’em in and let them live that way rather than try to help them elevate themselves! Because the Democrat Party doesn’t need people elevating themselves. It doesn’t help them. So we’ve had a totally redefined notion of compassion. We have set out now and claimed that the old America that demanded self-reliance, productivity? “That was a mean America! That was a discriminating America. That was a racist America.

“That was a bigoted America. That was an America that didn’t account for all of the suffer and misery in the world brought about by America,” which is the cockamamie place we occupy today. So long story short, Trump is refocusing on the public charge immigration rule. Under the new rule, Trump is going to deny green cards to anybody who has gotten welfare benefits for more than 12 months in three years. That is a huge change from Obama.

Human dignity, human achievement, human self-respect. These all used to be common, everyday virtues that everybody sought and aspired to. Today they are racist and bigoted and homophobic and whatever the hell else pea brains like Fredo Cuomo can accuse it of being. So Luba here was calling to vouch for the notion that refocusing on public charge — making sure people can take care of themselves — is exactly right. It’s what she had to do. It’s what she and her family had to do to get into the country. Brief time-out. Thank you again, Luba!