The Latest Twists and Turns in the Epstein Mystery

RUSH: Okay, folks. We have done something! The warden at the Metropolitan Correctional Center — the prison, the jail where Epstein committed suicide — is gone. The warden has been transferred. So we’ve done something, and two other people have been placed on administrative leave. See? We have done good. We got results. Now everybody can feel better about what happened!

RUSH: Let’s go to Rudy. Rudy was on Fox today trying to explain. He was one of the first people that expressed incredulity when it was discovered that Epstein had died in his cell. Now, there are news reports out there today that other inmates are reporting that they heard “shrieking” in Epstein’s cell, and that he did indeed hang himself with bedsheets, which Rudy admits (you will hear here in a moment) are made of paper. He apparently did it with a doorknob somehow and a chair and was able to lean forward.

It sounds like it’s almost a copycat version of how Robin Williams did it. But there was shrieking in there and all kinds of noise. I don’t know. If you hang yourself, you’re not the one making the noise, if it’s a good job. There’s still a lot of unanswered questions — and did you see the FBI raided this perv’s island? Yeah, he’s got Little Jeff’s down there, next to big Little Dick’s, right off Virgin Islands down there. The FBI shows up with a bunch of speedboats. They’ve got 12 agents. They get on the island then they’re jetting around in golf carts.

I thought that had already been done! I thought they’d cleared that place out, that they’d gone into that weird-looking temple building with the Notre Dame gold dome on top of it, the blue-and-white-striped edifice. What is there to get out of that place now? Anyway, the attorney general, William Barr, said, “Look…” Oh, and a Miami Herald reporter who was originally involved in getting all of this restarted… They did this big piece that really called out all the people who gave Epstein a pass in his first foray into the legal system back in 2007-2008.

This reporter says that there’s all kinds of additional names coming. All kinds of additional documents are gonna be dropping and being made public here. Attorney General Barr has said, (paraphrased) “Look, if you think because Epstein’s dead that you’re off the hook, you better think again. We’re gonna come for everybody who had anything to do with the guy. We know who you are, and it’s only a matter of time.” So Rudy is on Fox today with Bill Hemmer. The name of the newscast is America’s Newsroom, and Hemmer said, “Okay. So Rudy, you’ve looked into it now. You know people involved. What’s happening on a Saturday night inside this jail?”

GIULIANI: There’s absolutely no excuse for this. What happened here, to me, is mind-boggling. It’s impossible to happen. It’s a relatively small facility. Almost everything is within view, if you want it to be, of the guards. This argument over whether he was on suicide watch or not is, like, silly because if he was on suicide watch, he should have been on watch! The guy was a high-risk prisoner. There are probably 50 very important people that have a motive to kill him. Prisoners don’t like him. Prisoners are strange. Perverts, they don’t like. So they’ll kill a pervert just to kill a pervert. Second, he’s a possible rat also. He might commit suicide. He apparently attempted it. I do not understand how anyone can explain not having him under 24-hour surveillance or not checking the camera constantly.

RUSH: Well, yeah, but it happened. It happened. There are stories now that somebody in this facility — not in the Epstein case, but there was somebody — was let go because he was bribed previously. We know this happens. We watch cop shows on TV. But all of these things are true. Suicide watch or not suicide watch. The thing about other prisoners not liking perverts, as funny as it sounds, it’s true. Prisoners… (sigh) Like you have El Chapo, Senor Guzman. This guy is trafficking in some of the most destructive, damaging stuff in the world, some of the most wicked drugs.

He’s selling it, destroying people’s lives — and yet you put a pedophile in jail with him, and he will think this guy is the absolute dregs of humanity, and they will do everything they can to harm a pedophile in prison. That’s what Rudy was saying here. It’s strange. “Prisoners are strange.” I mean, they’re the epitome of bad guys, but you put a pervert in there among ’em, and they’ve all got, like, a code: “Get rid of the pervert.” So Bill Hemmer said to Rudy, “Look, I understand suicide watch. The sheets that you are given are made of paper. I heard that. Is that true?”

GIULIANI: That is true. Yes.

HEMMER: Okay, and he hung himself with a bedsheet?

GIULIANI: Right. He never should have had that bedsheet, but we can go —

HEMMER: So the paper bedsheets were out of that room.

GIULIANI: We can go beyond that. His room should have been guarded because there was every possibility some prisoner that got loose would get in there and stab ’em, kill ’em, choke ’em, make it look like he was hung. The desire to kill him in that prison was very high. You gotta understand a prison! Of course, they understand it. The people running that understand it. It would be very hard for me to understand the explanation as to why this man wasn’t watched 24 hours a day. 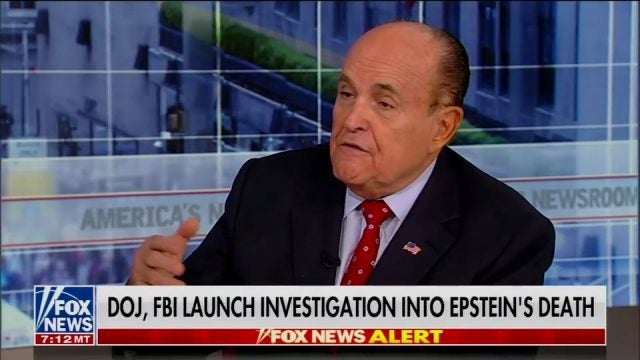 RUSH: Yeah, well, join the club. I mean, everybody’s asking these questions. But Alec Baldwin, noted forensic scientist, has said that Russia killed Jeffrey Epstein. This is how you know that they’ve all lost it. “Actor Alec Baldwin claimed…” Why does what Alec Baldwin claims make the news anyway? (impression) “Because he impersonates Trump on Saturday Night Live, therefore he’s the equivalent of a farm wife actress who has experiences in droughts when the crops won’t grow.” Hey, by the way, we got the eggs out of the cages. I guess next will be the… fill in the blank.

Anyway, “Actor Alec Baldwin claimed [that] Jeffrey Epstein was killed by the Russian state, which Baldwin said is now ‘in charge of everything’ as a result of the Trump presidency.” He tweeted on Sunday, ‘The Russians killed Epstein. They’re in charge of everything now.’ He Instagramed a photo of himself wearing a MAGA hat,” Baldwin did, “but with the Make America Great Again written in the Russian alphabet.” Total idiot. Total idiot. “The security tapes at the jail where Jeffrey Epstein killed himself” are nowhere to be found. The security tapes at the jail where Epstein killed himself are gone.

“Last year, a prison guard at the jail, Victor Casado, pleaded guilty to taking more than $25,000 in cash bribes to smuggle cell phones, alcohol, and food to a wealthy Turkish gold trader between 2016 and 2017.” Here’s the story: “A Dozen FBI Agents Raid Jeffrey Epstein’s ‘Pedophile Island,'” and now the French “are calling for an investigation into Epstein’s links with France.” What the hell was he doing there? The French want to know. “Trump is asking questions shared by millions of Americans with the Epstein conspiracy theories…” James Carville and Joe Lockhart are livid that Trump has popularized the Clinton death toll. They’re beside themselves that Trump has (laughing) put this out into the public domain.