Why Is the Robust Trump Economy Such a Secret to So Many?

RUSH: Scott Walker has a piece today, the former governor of Wisconsin, in the Washington Times acknowledging Trump’s robust economy. Let me ask you — changing subjects here — do you remember back in the George W. Bush days, I’m sure you do once I remind you of this. You remember the left was screaming nonstop that we needed to become energy independent so that we didn’t have to go to war to keep the lights on?

We are now the world’s largest independent producer of energy. We’re not dependent on anybody for energy, and we didn’t have to go to war to do it. We just had to get the left out of the way. We had to get the environmentalist wackos out of the way. We had to authorize and promote fracking and pipelines and any number of other things that made economic sense, and now we are the world’s largest producer of oil. The Democrats have lost another issue.

Now, Trump is in Pennsylvania today, Monaca, Pennsylvania. He’s visiting the Shell Pennsylvania Petrochemicals Complex, still under construction. The plant’s purpose is gonna be to convert natural gas into plastic pellets for manufacturing. And the president will deliver a speech on America’s energy dominance and manufacturing revival in a state that he won in 2016. The Democrats have totally lost this issue.

Here’s a pull quote from Scott Walker’s piece. “If the 2020 presidential election is about pocketbook issues, logic suggests that Mr. Trump should win in a landslide. That explains why Democrats don’t want to talk about the economy.” And they don’t. To the extent that they talk about the economy in their debates, it’s to lie about it and to misstate things, mischaracterize things, and clearly in ways that they don’t understand.

But, you see, most media outlets are complicit with the Democrats. Not only do they forcibly avoid talking about the strong economy, they consistently get the facts wrong. So we have a strong economy. By the way, I need to remind you. I interviewed Larry Kudlow after Friday’s program for the next issue of The Limbaugh Letter. And, man, is it good. It is informative, it is upbeat, it is optimistic. I cannot wait ’til this interview gets published in the next issue of the Limbaugh Letter. It’s coming soon. I’ll let you know when it gets out.

He was terrific. He was enlightening. I asked him just basic questions about the strength of the dollar, why it’s bad, why it’s good, Federal Reserve rate cuts, all this stuff, state of the economy. I’ll tell you one answer, I said, “What is our greatest vulnerability economically, as you sit there in the White House, you’re the president’s chief economic adviser, what is our number one economic vulnerability?” 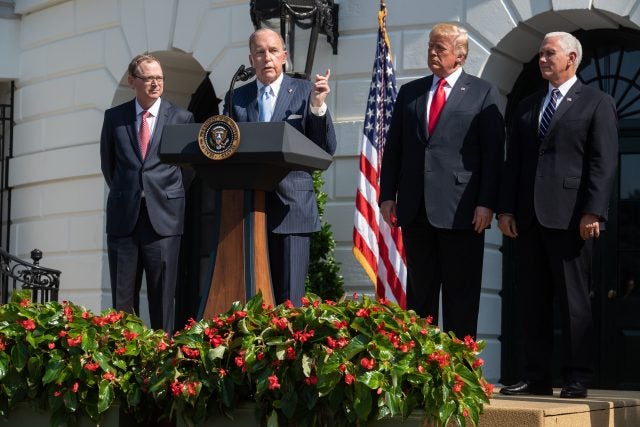 And he said, “The rest of the world.”

The rest of the world’s economies are in dire straits, including our allies in Europe. And we had a fascinating discussion about negative interest. Do you know that in parts of Europe, if you buy a government bond, you will have to pay the government an interest rate rather than them pay you? A thousand-dollar bond is worth $900 when you buy it because of negative interest rates in Europe. They are in an economic malaise.

“Their models are wrong, Larry. Why can’t they look at what’s happening in the U.S. and emulate it?” His answers to these questions were fascinating. They were inspiring. And it really is true. We are living in a very robust economic period of time that is one of the greatest secrets.

I asked Kudlow, “Is this economy so strong, Larry, that people in this country are living it and know it without having to be told?” And his answer to that was that there’s a lot of optimistic people around Trump, particularly his economic team.