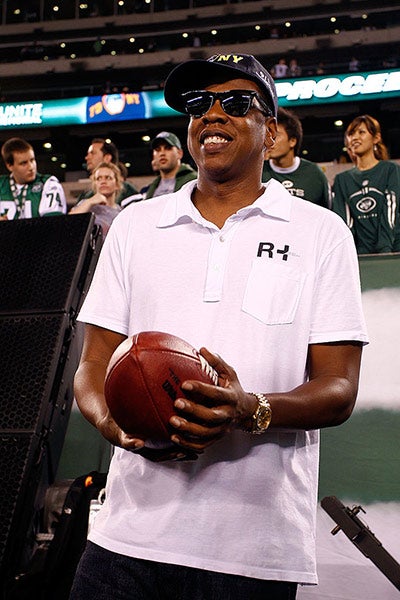 RUSH: Have you heard that the NFL has hired the famous music impresario Mr. Jay-Z to be the director of music concerts and culture for the NFL? You heard that. What do you mean you couldn’t believe it? They have to do something to keep the Kaepernick wolves at bay. And this is what they think they’re doing. I’ll ‘splain this.

RUSH: Look, I’ve got to do it, the Jay-Z official music director and so forth for the NFL. I had every intention of getting to that today and I could start but I couldn’t finish it. But there’s a point that I want to make about it, not just report what it is. And in the process, I did not know that I had been in a lyric in a song by Mr. Jay, Mr. Z. Yeah, if we could play that, let me find that number, grab sound bite No. 21.

This is a song that Mr. Z released entitled Off That or Off That, whatever. And we have a 16-second excerpt from this monstrous hit and the lyrics in Mr. Z’s tune here that mentioned me.

[MUSIC PLAYING/LYRICS]: It ain’t black vs. white, my n*gga, (bleeped) we off that. Please tell Bill O’Reilly to fall back. Tell Rush Limbaugh to get off my balls. It’s 2010, not 1864. Yeah, we come so far…How’s that for a mix? Got a black president, got green presidents…

RUSH: I had no idea that I had made the lyrics of a song by Mr. Z. I didn’t know that I was on his balls either, that’s all kinds of stuff that I didn’t know. Well, 1864. See, these guys, obviously Mr. Z has never listened to this program. And it’s the same old thing, and people ask me how do you put up with it for 30 years, 30 years is how I put up with it.

After a while it just — it is tough, folks. It’s really tough being in the same place where so much ignorance is. I can’t tell you how — well, you who have kids who are very young, think they know everything and they don’t, it’s maybe the same thing.