RUSH: Bridgett in Dayton, Ohio. Great to have you with us. Hi. Bridgett, are you there? Testing, one, two, three, three, two, one. The phone’s not working or is she just not there? Somebody — okay. So let’s try Denise in Atlanta. Denise, are you there?

CALLER: Hi, Rush. This is Denise. How are you?

CALLER: Good. I observe with these low-cost or these jobs that Americans don’t want to do that you were talking about in the first hour with the poultry plant in Mississippi, I’ve come to believe through some experience but just observation that the companies that are lobbying congressmen to increase these visas and to overlook straight up illegal immigration over the border have just set aside a number of jobs on their payroll that they’re unwilling to pay American wages for.

And I do think that it’s prevalent in the food industry because Americans are addicted to inexpensive/cheap food. But in the technology industry we have a large investment in STEM education, in our schools, middle school, high school, colleges, and I just believe these tech companies don’t want to pay what Americans need to earn in order to live like middle-class Americans.

And I find it quite ironic — the House passed this bill, and, I’m on the road, so apologies I don’t have the House bill number that’s passed the House, is going to the Senate. But they passed basically an India-first expansion of these H-1B Visas, that’s going to allow 600,000 Indian illegal immigrants to come over here and work in tech each year for the next decade. That is six million people from one country coming in to one industry and it happens to be an industry where a lot of Americans have privacy concerns.

And it also happens to be an industry that we don’t have a high level of trust anymore because a lot of those companies, the big names, are de-platforming the people on our side who are trying to communicate with us. And I just don’t believe that there are jobs available that Americans will not do. I believe that there are jobs that tech and food companies are unwilling to pay American wages for. That’s my point.

RUSH: Well, that’s obviously been the point. When at first, the effort here to say that there are jobs Americans will not do, the illegal immigration push, the comprehensive immigration reform, both parties have always been for it. And the dividing line, the left wants them for voters, and supposedly so do the Republicans.

The Republicans said, “Hey, these people they’re natural conservatives. They are Hispanics and they’re Catholic and they’re natural conservatives.” We’ve been told that. That’s not true. There’s no way of knowing that on a blanket basis. The left wants them for voters. The Chamber of Commerce comes along and says, “Look, these are just jobs Americans won’t do anymore. They’re beneath them.” It was very key to say that these jobs are beneath, what the implication was, the dignity of Americans. And yet we need this work performed.

So this was how Republican support was pitched. Now, thankfully, most Republicans never sign on to this, they never fell for it. Even though the Republican Party big wigs were hell bent on getting this done. And the idea that the Republican side of this wants cheaper labor has always been a factor in their desire for there to be no limit on illegal immigration.

What it boils down to is that the people we’re talking about are not like you and me. They don’t put the country first. It’s not that they’re anti-America. They don’t think there’s anything that can destroy it. America’s going to be here. There’s nothing that can change that.

So what do we need? We need cheap labor. The cheapest labor we can for whatever reason, our stockholders, our profit, bottom line, P&L statement, whatever it is, and there’s no thought given to the damage that all this will cause culturally, societally or even economically, because as far as these people are concerned, none of this is going to affect them. And that’s the big problem we all have, is this lack of concern over the damage done to the country of this.

RUSH: Yeah, that was one of the first things I was told. There were members of the Bush administration who flew down here to try to lobby me on signing on to comprehensive immigration reform. We had to do it. And there were two points that they attempted to persuade me with. One was… Pfft! Well, there were three. The first one was, “This is how we take over. This is how we destroy the Democrat Party!” That was the first thing they told me.

“Rush, the key to this is, if we can secure the Hispanic vote, we can eliminate the Democrat Party as serious opposition.” “So how do we do that?” “Well, comprehensive immigration reform! These people want to come to the country; we let them come. Rush, so many of these people are natural conservatives! They’re devout Catholics — and then, of course, Rush, there are jobs that just Americans won’t do. This is the future. We’ve got to do this.” 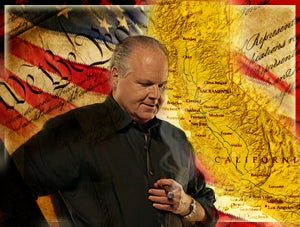 Then, of course, you could say, “Where are all of these conservative governments in Latin America if there are so many natural, devout Catholic conservatives there?” Now, the jobs that Americans won’t do? I’ll admit that that worked on me for a while. But it didn’t ultimately, of course, make me change my mind. But of the three arguments I was hit with, that is the one that made the most sense to me. But don’t worry. As you well know as a regular listener, I was never ever even close to signing on to comprehensive immigration reform because of the cultural damage that it was going to do.

This is what I always marveled over, folks, was the absolute absence of any concern about that on the part of any Republican that was pushing comprehensive immigration reform. The Democrats… I could totally understand the Democrats wanting to overthrow the culture and replace it with, you know, the cockamamie philosophies of life they’ve got. But to overthrow the founding of the country? I couldn’t understand why there was no real concern about that, and that just took some experience to figure out. That just took some life to figure out.

It basically is they don’t think anything is going to happen to America, at least where they live. They don’t think anything is going to overthrow America, certainly not something like immigration, which is not a foreign government takeover in their view. As far as the effect on the American culture, “Oh hell, there’s already so many different American cultures; what’s one more?” That was the thing that alarmed me the most was the total absence of any concern about that. And I don’t think there’s much of it now, even among those who are advocates of comprehensive immigration reform.

Which, by the way, just because you don’t hear about it in those terms anymore does not mean it is gone as an objective. They’re still trying for it in any number of ways. They’ve actually, I think, given up making it happen legislatively. Now they’re just trying to make it happen by making it happen, with a bunch of never-ending caravans. Who cares who they have to partner with — coyotes, drug cartels, whatever! But if they want those people here, so goes the theory, they’re going to find a way. If they can’t do it legislatively, they’ll find another way.