Obama’s Legacy on Display in Philadelphia

RUSH: Let’s go to Philadelphia next. “Police sources identified the gunman in a standoff at a Tioga apartment building that left six police officers injured as Maurice Hill, 36, a Philadelphia man with a lengthy history of gun convictions,” and yet he had guns! He had “a lengthy history of gun convictions and of resisting attempts to bring him to justice. [Maurice] Hill’s history in the adult criminal justice system began in 2001 when he was 18 and was arrested with a gun that had an altered serial number. Public records show that he has been arrested about a dozen times since turning 18, and convicted six times on charges that involved illegal possession of guns,”

Everything the guy did is illegal!  He was not permitted to have guns and yet he had them.  How can that be?  Oh, I know! “We didn’t have a red flag law to nab the guy. That’s right!  If we would have just had red flag laws…” But that’s not the story here.  Some lunatic going crazy and shooting cops, sadly, is not the story.  The story is Philadelphia residents of this apartment building harassing, taunting and throwing objects at the police, who were responding to an active shooting that was endangering every citizen in this neighborhood. 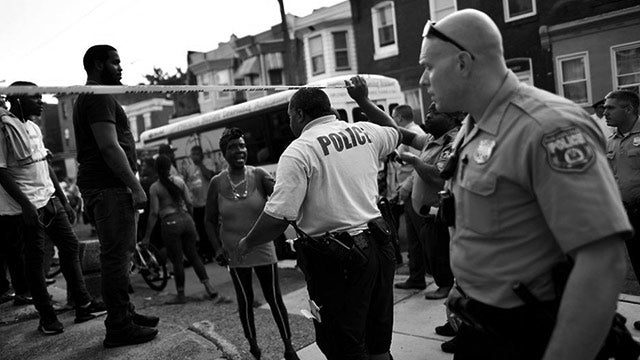 I’m going to tell you whose legacy this is:  Barack Hussein Obama.  Black Lives Matter saying, “The cops are murdering black people;e.” Lies.  Just this week we had Elizabeth Warren and I forgot the other presidential candidate — oh, Kamala Harris — lying about the “fact” that a black citizen in Ferguson was “murdered” by white cops.  The fact checkers can’t be bothered to correct this.  So the embrace of Black Lives Matter — and by the way, Obama praised the leaders to the hilt. He was inviting them to the White House.

At the same time, Black Lives Matter members were in the streets chanting, “What do we want? Dead cops! When do we want it?  Right now!”

Another chant said, “Pigs in a blanket! Fry ’em like bacon.” 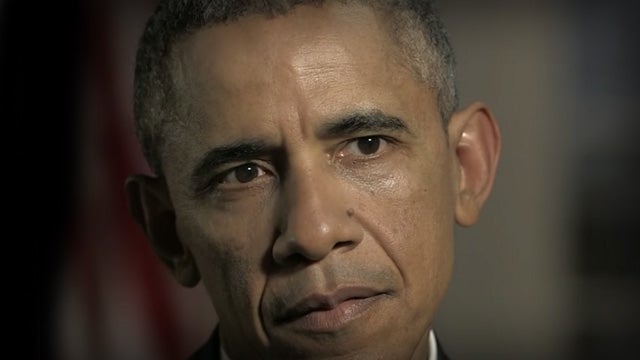 During the Obama administration, police were indiscriminately accused. They were tried and convicted by Democrats. Rallies to support the police in Dallas were not permitted.  The police were assaulted.  It all started with Obama’s Beer Summit and “Skip” Gates and this never-ending… It was added to by Colin Kaepernick and the NFL players who kneeled and refused to stand for the anthem and the flag, on the basis that African-Americans are being shot dead and murdered by the cops.

So here we have a guy with a rap sheet longer than he’s been alive shooting up an apartment building, injuring six cops — and the crowd is cheering him on!  Philadelphia police were called to an incredibly dangerous crime scene.  They showed up with great bravery.  They went about their job to remove this clown and to protect the neighborhood.  Six cops shot! Despite that –despite the language of the leftists, despite the taunts, despite having objects thrown at them — the police did their jobs.  Look, I’m not exaggerating.

It wasn’t just Obama.  It was everybody in his administration supporting it, this whole Black Lives Matter business and just the idea that the cops are a bunch of pigs and they’re out there murdering people.  It doesn’t happen in a vacuum.  You know, they talk about the rhetoric here on talk radio and how it affected the El Paso shooter and there’s not even a shred of evidence to make that case.  But you can’t.  They never bring up Obama and Black Lives Matter and the never-ending assaults. The whole NFL protest era, until Trump shut it down, was about murderous cops.

You just can’t have that kind of behavior and that kind of language go on and on emanating from the highest levels of our country in government and have it not have an impact on people.  Make no mistake about it.  And why is it?  Why is it after all of these shootings we find out there were massive warnings?  Maurice Hill: Violent history, drug dealer, several gun convictions, served time in prison, violated state and federal gun laws.  Gotta take a break.  Ponder it on your own.  You don’t need me to wrap this up or connect the dots for you.

RUSH:  We now know the left loves the blame game.  So police and ICE facilities get attacked.  Who is to blame?  Well, if you listen to the left, it’s not the people who pull the trigger.  No, no, no! It’s whoever it is out there saying things, inspiring them to pull the trigger.  So, who is it that is to blame for the cops in Philadelphia being taunted, having things thrown at them — basically disrespected — while the cops are trying to save people’s lives, bring a shooter down, and then these ICE facilities are being attacked?

RUSH: We’ve got, in Philadelphia, Robert.  Great to have you with us, sir.  You’re up first today.  Welcome to the EIB Network.

CALLER: Oh, thank you so much, Rush.  Listener since the Clinton era.  Thank you for having my call.

CALLER: Yeah, so, I live just a couple blocks away from the mayor — Mayor Kenney — in this town, and the amount of violence that has increased in this city ever since he became mayor is so unbelievable.  Everyone’s talking about it.  The police have literally handcuffs on them by our district attorney.  They don’t allow them to arrest anybody anymore.  Everybody is supposed to be nice.  They don’t even report crimes anymore because they don’t want the statistics.  It’s just a horror.  And everyone in this town — you’ve got to believe me — blames it all on our district attorney and our mayor, who have just let the criminals run amok.

They just run amok! And the worst part is, I live in the historic district — right down the street from the Liberty Bell and Betsy Ross House and Independence Hall and everything — and they’re all running through here doing all sorts of crimes every day.  You can look it up.  I don’t know why these people let this happen, why they keep voting this guy in.  It’s just amazing how this town has just plummeted ever since he became mayor.  But they’re going to vote him back in again.  (chuckling)

RUSH:  It’s tough to beat Santa Claus, and that’s how your mayor is seen by —

RUSH:  It’s tough to beat Santa Claus.  They don’t see him the way you just described him.

RUSH: They don’t see him as soft on crime or any of that.

CALLER: (laughing) No, he’s going to bring you a red bike!  (laughing)

CALLER:  Oh, I watched it live, Rush — and then I saw them throwing bottles at ’em.

RUSH:  And they’re laughing at them at the same time.

RUSH:  It’s not just your mayor, by the way, that’s responsible for this.  How did this guy…? They want to talk about gun shows and expanding the background checks at gun shows.  How the hell did this guy get a gun?  Just off the top of your head, how did this guy have a cache of weapons given his rap sheet, given his history?

CALLER:  I’ll tell you how he got the gun:  He got the gun the same way that the other criminals are going to get the gun if they ever pass any of these laws.  And they’re just going to keep on doing it.  And then they’re going to take the guns away from the law-abiding people.

RUSH:  How is that?  How are they getting the guns?  The point is, they’re not going to gun shows, and they’re not submitting themselves to background checks.  They’re stealing the guns.

CALLER:  There are break-ins every day — hundreds of them — in this city, literally hundreds of them.  If people know you’ve got a gun in there, they go in and steal it.

RUSH:  You said you live in the historic district.  Have you ever thought about decamping and moving to Bucks County?

RUSH: (laughing) Look, I’m glad you’re still laughing about it.  I really am.

RUSH: I’m glad you called.  It’s great that you’re the first caller of the day today, Robert. Thank you much and all the best.

RUSH: Now, the Philadelphia Inquirer, I just want to read a passage of their coverage of this. “Along the way, he beat criminal charges on everything from kidnapping to attempted murder. Hill also spent time in federal prison. In 2008, he pleaded guilty to federal firearms violations after he was caught with a Smith & Wesson .357 and later a Taurus PT .45 semiautomatic. His prior felony convictions should have barred him from owning those weapons.”

Right. Why didn’t they? The only reason I bring this up — well, not the only reason — we have these mass shootings, and by the way, I predicted yesterday there was going to be another one, and lo and behold this happened just a few hours after. There isn’t a single gun control law that would have stopped this guy. We’ve got more than enough already on the books that would have stopped this guy and none of them did.

This guy hasn’t even been dealt with accordingly by the criminal justice system. He beat criminal charges on everything from kidnapping to attempted murder. Somebody’s not serious about dealing with people like this in Philadelphia, is the bottom line. But they want to blame this kind of thing on conservative talk radio, or on Fox News or some other extraneous, irrelevant entity just for the purposes of advancing a political agenda.

And they’re doing great damage in the process because who isn’t demonizing the cops and promoting the demonization of cops.