RUSH: Okay. Quick, I have a little miniature pop quiz for you. What was all over the news yesterday that you can’t find a single word about today? Dadadadada. What was that? Recession is it, Mr. Snerdley. As an employee you don’t win anything, but that’s exactly right.

The recession was all over the news yesterday. It was all anybody was talking about. It was panic city. It was pack-up-the-kids-and-go-to-New Zealand day. It was get-out-of-America. It was over. We had it. Finally, we’re going to get rid of Trump. 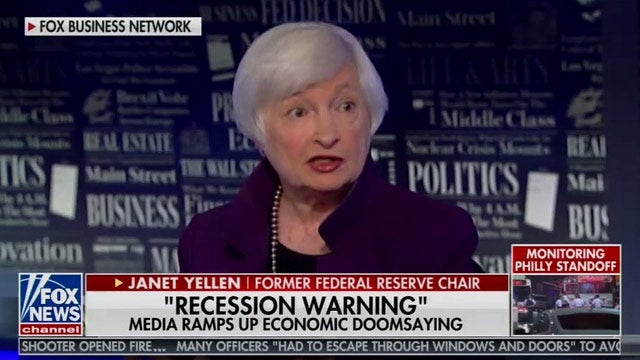 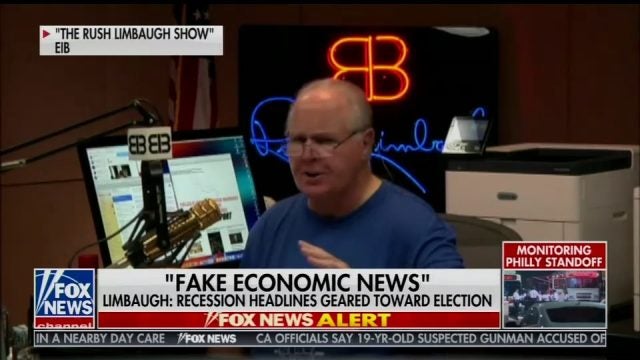 So what the heck was yesterday all about? Stand by and I will tell you. Well, it’s time to broom all the headlines from yesterday and last night all over websites and cable news. Today, retail sales numbers have come in strong. Walmart sales are very strong. The ChiCom foreign minister has announced a desire to talk, to reach a trade agreement.

Can you say blink? The ChiComs want to talk to Trump. Trump has responded by saying (imitating Trump), “You know it might be time to have a personal meeting with my really good friend Xi, Xi Jinping.” Janet Yellen says no recession. Hong Kong protesters continue to wave the American flag and sing the National Anthem in English. Jay-Z has thrown Colin Kaepernick under the bus and overboard in his press conference with Goodell of the NFL.

What recession? Hong Kong officials offer to buy the protesters off with a government-provided country-wide financial package. You didn’t hear about that? The ChiComs have offered to pay the protesters to go away. Now, really, folks, what explains this? Let me just tell you one thing. And I’ve been saying this since the day Trump was inaugurated.

This is what Making America Great Again looks like, because there are so many forces aligned against that concept. And it’s not just people who are aligned against America. That’s part of it. But it is this globalist, anti-sovereignty movement that is occurring, centered in Europe, with a lot of players in the United States as part of it.

They couldn’t stick with it for more than one day because it isn’t true, folks. There’s no truth to the fact that we’re on the verge of a recession. We’re the only nation in the world with a demonstrably growing economy. We are not on the verge of a recession here. Quite the opposite. We still have economic growth that was not seen in eight years of the Obama Administration, which is another thing that is irritating a lot of people.

So that fits the bell as well. Come up with some economic calamity that nobody can possibly understand to explain why we’re going into recession. Only the economic wizards of smart understand. So keep a sharp eye, because I think they’ll probably deem what they did yesterday a success. But there’s going to be a price to pay for dropping it.

They took the market down a record number, 800 points in one day. They wanted to see what they, the anti-Trump forces, wherever you find them, folks. And believe me there are plenty of them on Wall Street. There are plenty of financial people who have fully bought into this globalist business. I guess I should expand on that today. I’ve referred to this today and numerous days in the past. 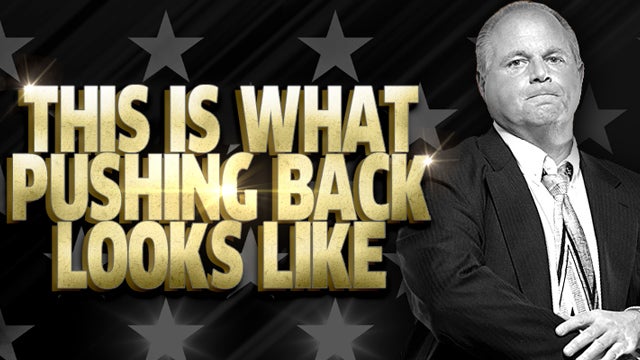 And mindless, never-ending invasions of illegal immigrants at the border is all part of it. There’s a massive effort. And, by the way, I will explain this as the program unfolds today. This is the reason why Make America Great has so panicked these people. They really thought they were on the way to accomplishing this with Obama in the White House.

Now, we’ll go back and revisit some of Obama’s quotes regarding this. Obama was all for this in a couple of speeches at the United Nations. Trump coming along, Make America Great Again, all of this talk about nationalism, white nationalism, all of this is made-up bohunk to try to destroy Trump’s effort at protecting, preserving and maintaining the United States of America as a sovereign nation, which is really what this is about when you strip away all the other distractions.

RUSH: I don’t want to spend a lot of time on this ’cause it’s just the latest… Yesterday they tried to crash the economy.  They really did.  The Drive-Bys, the left, the worldwide anti-Trump apparatus tried to trash the U.S. economy yesterday.  I think it was a dry run. 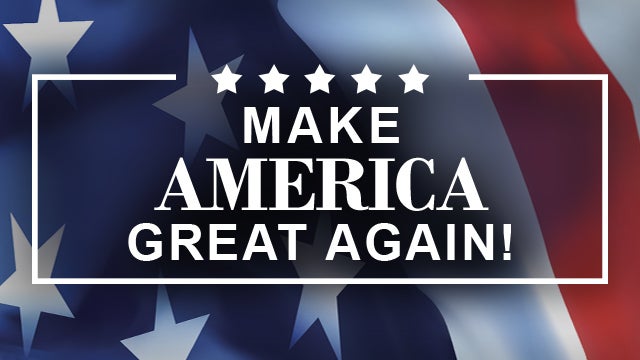 Now, by “dry run,” I really think that they were doing something yesterday to see what the impact would be, because it’s a little early for this to happen before the 2020 election.  So I think it was two things. If they could have crashed the economy yesterday, they would have taken it.  But it was also a dry run to see how their attempt to create a narrative of total economic doom would go. Could they pull that off? And I think they’re concluding that they did.  I think they’re concluding that they were successful in creating the narrative.

Did the narrative have any impact?  No.  But that doesn’t mean that they won’t try it again.  I also have… I found a brilliant piece today.  I was actually doing show prep and I ran across a piece that explains this worldwide globalist effort that is attacking the sovereignty and concept of nation states and how real it is and who is a part of it.  In reading this, it just solidified for me why this sheer panic that resulted from Donald Trump and his singular campaign phrase, Make America Great Again.

This is not a conspiracy theory; this is an actual objective.  Maybe “destroy” is the wrong word, but to dissolve the concept of nation states to be replaced by a global governing body of elites who will be the decision-makers for the entire world.  Don’t flinch at that or don’t smirk at that.  That’s something that a lot of people do have as an objective, and they were well on their way! Because for this to happen, the United States has to, quote/unquote, “fall.”  The sovereignty of the United States has to go.

Now, for that to happen, the democratic process in our country has to also fall by the wayside.  I mean, it would be a snap to recruit the European countries.  That’s already been done, pretty much, with the European Union.  It would be a snap to go get the Central American countries and put them in this global organization.  But the United States is going to have plenty of people that want no part of it.  They’re going to resist it, because all it’s going to mean is a gigantic comedown for the United States.

But it can’t work, from the globalist perspective, unless it happens here as well.  This is a very truncated, abbreviated version of what’s coming. But the election of Donald Trump, under the slogan Make America Great Again, is precisely what has sent these people into orbit. Not just the Democrat Party here and not just the American left, but the worldwide left.  It is the exact opposite of the groundwork they have been laying.  I mean, you might even say that they were laying the groundwork for this long before the Obama administration.

It’s just that the Obama administration was where it actually began to plant roots and became more than just an objective or more than just a series of ideas.  Obama was actually creating policies and results that would facilitate this.  I can’t emphasize… I can’t emphasize enough how much Donald Trump winning the presidency with that slogan, Make America Great Again, has just upended a worldwide movement of people who cannot allow him to succeed.  They just can’t permit it.

RUSH: Here is Chad in Irwin, Idaho.  Chad, I’m glad you waited.  Great to have you with us, sir, hello.

CALLER:  I’m a day trader and wanted to pass on some information about the yield-inversion farce.  Over the past 40 years, dating back to 1978 — the year I was born — the inversion triggered seven times.  Meanwhile there —

RUSH: Do me a favor. For those in the audience that do not know what the yield inversion is, or the inverted curve is, do you think you can explain it without a chart and a graph that people can understand it? 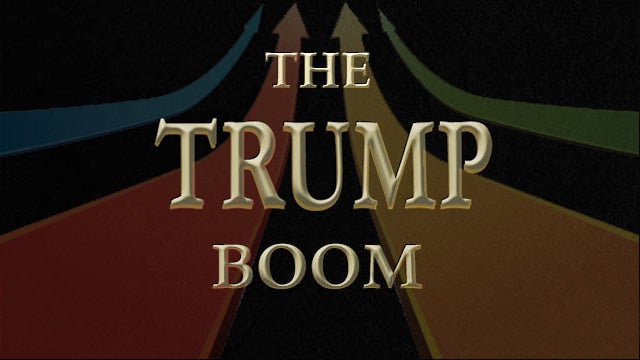 RUSH:  Stop right there.  He’s exactly right.  All this means is that when the yield gets inverted by the two-year bond, not the 10-year bond.  That’s all it means!

RUSH:  So that is the correlation.  All it is, is buy the two-year bond instead of the 10-year bond.  That’s all it is.

RUSH: And they tried to make a plunging depression/recession story out of it yesterday.

CALLER:  They use it as some kind of a crystal ball to produce recessions, which is nonsense.  Anyway, the S&P 500, on average, has produced positive returns on every timeframe from a three-month to a three-year after inverted, with an average return over 5% a year.  So the whole thing, the inversion, is just nonsense.  I think it’s deep state globalists shorting the market, scaring out the average retail investor.  I don’t know. To me, I say, “Don’t worry about it.”

RUSH:  Wait, wait, wait.  Now, there’s no… It may be that.  But there’s much more to it than that.  These people… Look, I don’t have any empirical evidence for this. I’m just using my intelligence guided by experience, and I’m telling you: Yesterday was a dry run.  If they could have crashed the economy yesterday, they would.

CALLER:  They would have taken it.

RUSH:  The hell yes, they would.  You just, in your own words you just said this is what they were attempting to do.

RUSH:  You didn’t use “crash the economy,” but you used words that mean the same thing.  If they could have done it, they would have taken it.

RUSH:  But I think yesterday was a dry run to see how they can make it happen in the media, if they could succeed in getting everybody to go along with it.  Because it’s a little early. If you want to crash the economy, if you’re really worried the economy is what’s going to get Trump re-elected, you want it to crash next year.

RUSH:  Not now.  If you think you can do it — and they do.  They obviously think that they can crash the economy, and that’s what the dry run was for.

RUSH:  You make your living, Chad, as a day trader?

CALLER:  Yeah, my wife and I quit our jobs four years ago.  We lived in rat-infested Baltimore City. We’ve been traveling around the country for about four years and I’ve been day trading for about three.

RUSH:  So has it been lucrative for you out there?

RUSH:  There you go.  Chad, thanks for the call.  I appreciate it.