Pastor: President Trump Has Won Me Over

RUSH: We’ll start with Brian in Las Vegas. Great to have you on the EIB Network. Hello.

CALLER: Thank you for taking my call, Rush. I consider you my political pastor. Whenever I can’t make sense of things it’s refreshing to listen to your program.

CALLER: I’m one of those people you were talking about earlier in the week as far as we weren’t Trump supporters originally, but now we’re believers. I’m a pastor in Las Vegas of a small church. So the night he got the nomination, I told my church the next day that the country is really in a sad place if those two people are nominees.

But I’ll tell you what, he’s done more for Christians and the church than the last three presidents as far as getting away with — we always had that threat from the IRS as far as taking away our tax-exempt status and our freedoms being stripped away. So he’s made me a believer. I know he’s going to get four more years.

RUSH: This is the kind of thing that no pollster will ever find. This is the kind of story that no reporter will ever find because no reporter — actually, I take it back. One reporter did, an enterprising reporter at the New York Times, and he really had to couch this story, couch the terms, but he did a story on how everybody thinks Trump’s polling numbers are plummeting but the dirty little secret is that according to other polling there are millions of people who didn’t vote for Trump who now like him, and that’s not being reported or demonstrated anywhere.

And there’s a Zogby poll out there, Trump’s approval rating among Hispanics is at 51 percent. That is a constituency that the democrats are counting on big time. Fifty-one percent approval for Trump. Here’s Brian, our pastor from Las Vegas. Trump gets the nomination and he’s devastated. “Oh, my, what in the world is happening?” I can imagine what you thought of Trump as a reverend and as a pastor.

Now look what you get. You get one of the most pro-life presidents we’ve ever had despite all of the Republican presidents and candidates that touted their pro-life credentials. We have a president who wants to restore American greatness and normalcy, which includes some good old-fashioned morality and standards, and I’m telling you people like Brian are, I think, scattered all over this country. And the Drive-Bys are totally missing it. 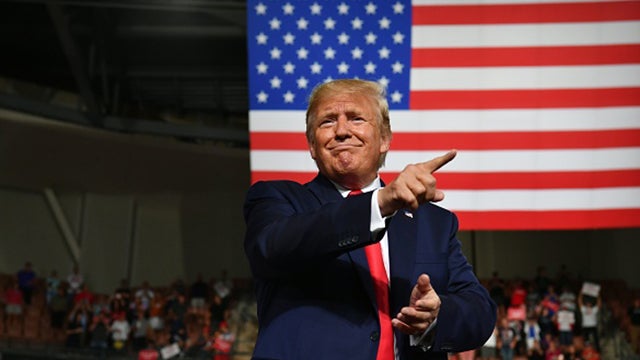 Even with that New York Times story. That New York Times story is the exact kind of thing the Drive-Bys will ignore and they’ll get on that reporter for even writing it, and they’ll probably question the editor; how could you let that be published? They don’t want to know that kind of truth. They’re sitting in this fantasy world where they think that everybody’s abandoning Trump.

They think because Anthony Scaramucci has turned on Trump, that that means everybody who supported Trump has got to be turning on him now. They live in this delusional little world where whatever they think happens to be the majority in their minds. And so they’re not open to — once again, Elizabeth Warren, figuratively the democrat frontrunner depending on the poll, 700 people, in what is her home state essentially, New Hampshire, 700 people.

There isn’t a single person on the Democrat side that has anywhere near the energy that Donald Trump brings. I think they’re making the same mistakes that they made in 2015 and 2016. They’re assuming back then, this guy can’t get elected; this is a joke, nobody’s ever going to — he got elected and they couldn’t believe it, and they still don’t. And they try to overturn the election results. And since they don’t believe he really got elected in 2016, he’s not president now and he shouldn’t be. And there’s no way he can win again. And they’ve locked themselves into this attitudinally and factually as they define things.

RUSH: You know, I got something only half right. Moments ago, I said the latest Zogby poll found that Trump’s approval number is 51% with Hispanics. It’s 51% African-American and Hispanics, Trump’s approval number. Now I will guarantee you that even if the Drive-By Media knows this, there is no way they are ever going to report that. No way!