RUSH: Next, we’re going to move on to the Rashida Tlaib and Ilhan Omar ill-fated visit to Israel. Actually, it was Tlaib who has told a bunch of different stories on this. Let’s just… I’ll tell you what. Let’s go to the audio sound bites, because originally she said that she wanted to go visit her grandmother, and while she was there she was going to do some sort of protesting, politicizing about Israel. Israel said, “No, you can’t. You’re not being allowed in.” So she changed her story and said she wasn’t going to see her grandmother anyway. 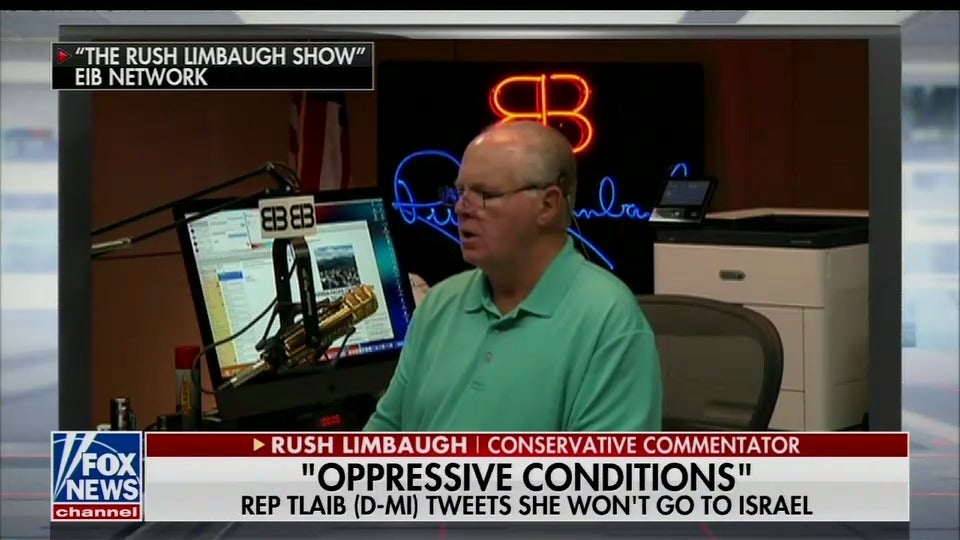 And it’s just become a mess, only because there are people who think that enemies of Israel should be allowed into Israel to cause trouble for Israel and those would be people in the Democrat Party (which is the new home in America of anti-Semitism) and the Drive-By Media. Now to set this up, let’s go back to the Fox News Channel, America’s Newsroom. Bill Hemmer today played a clip of me commenting on Israel banning Omar and Tlaib, and this is, audio sound bite number three. (audio glitch) Well, let me read it to you. It’s Bill Hemmer.

Here’s Rush Limbaugh, sound bite two. He plays the sound bite; he wants Juan Williams to react to it. The sound bite is me from yesterday saying, “You have two women who are out of control in their hatred for Israel and Jewish people. It’s their lifeblood. Before they became elected to the U.S. House of Representatives, these women grew up hating Jews. They grew up as anti-Semites. I don’t care if they’ve been elected to anything or not. That’s who they are.”

The excuse has been, “Wait a minute! You… You… Israel, you can’t keep duly-elected members of Congress out of your country!” Crazy Bernie is running around saying this and so are a lot of the other Democrats in the media. My point is that these two women, anti-Semitism and hatred for Jews is in their lifeblood. It’s why they wanted to be elected, that and many other reasons. These women have been raised as anti-Semites — and, look, I don’t even have to know them to know this.

All I have to know is Sharia Islam. They despise Israel! They don’t believe Israel has a right to exist. They are true anti-Semites long before they ever got elected, and Israel is under no obligation to let people like this into the country, particularly when they’re not going to be honest about why they want in. So, do we have sound bite four? Is four going to play when you think you’re firing four? (interruption) Let’s find out. Juan Williams on Fox responding to all this… 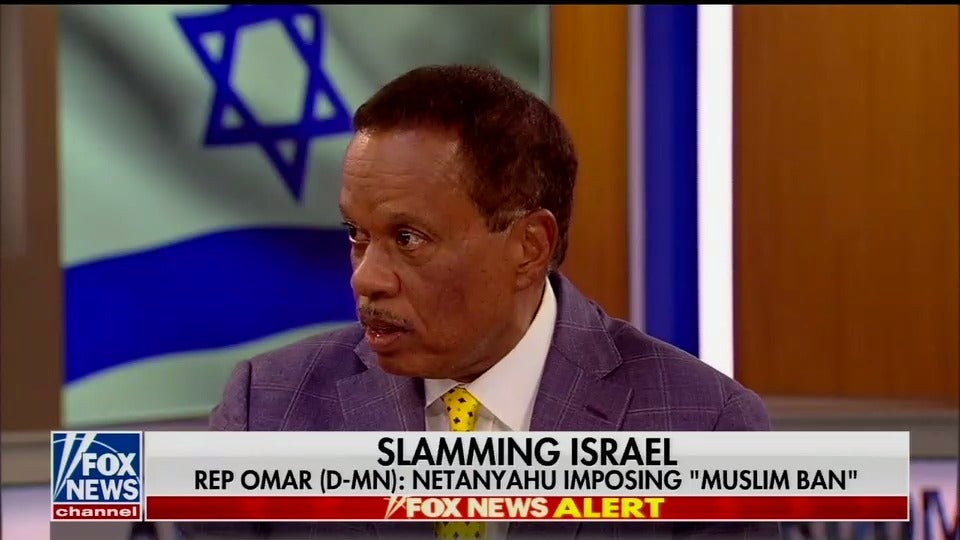 WILLIAMS: The Democratic majority in the House voted against the boycott resolution. It’s the president who, I think, wants to make them the face of the Democrats — and that’s just not the case! (crosstalk) Why do you think we’re talking about it? ‘Cause the president absolutely (crosstalk) broke all protocol, by going to a foreign leader and saying, “Block a member of Congress, our nation’s legislative branch, from coming to your country.” It’s unprecedented!

Isn’t it the same way with Chuck U Schumer? You guys are assigning all kinds of power to Trump. And, by the way, Netanyahu and the Israelis, they don’t need any advice from Trump on whether or not to let Omar and Tlaib in the country. Their instincts on this are just fine. Let’s go to sound bite 23. Here’s Tlaib. This is last night in Salem, Michigan. This is Rashida Tlaib talking about her proposed visit to see her grandmother in Israel.

TLAIB: You know, my grandmother is in her nineties. Her granddaughter is a United States congresswoman. She should have to be able to (sic) see me, to touch me, to hug me — and I’m going to continue to fight back. 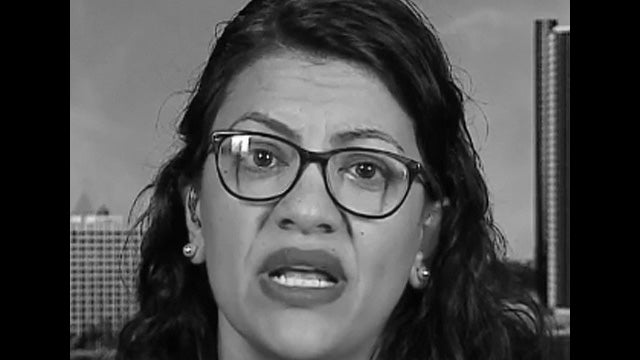 RUSH: That’s not really why she wants to go, and this has been learned and exposed. When the obstacle is put in the way… “No, we don’t want you.” “But my grandmother, my grandmother! I want to see my grandmother! My grandmother should be able to hug me!” Well, if that’s the only reason you wanted to go, that would have been your first stated reason for going, but it wasn’t. So, today in Israel, in the West Bank, Rashida Tlaib’s uncle, Ghassan Tlaib, said this about her proposed visit to see her grandmother…

GHASSAN TLAIB (via translator): We are against the conditional visit of Rashida to Palestine. Rashida has the right to visit Palestine as a Palestinian, regardless of being a congresswoman. Any citizen with a U.S. passport has the right to come visit their family without any conditions or pressure.

RUSH: Look, I don’t want to make anybody mad here. That’s not the objective. But there is no Palestine. This guy is talking about Israel, and it’s quite instructive. By calling it Israel… I mean those are fighting words. They don’t think there should be an Israel. They don’t think there ever should have been an Israel. There shouldn’t be an Israel going forward or a Jerusalem or Tel Aviv or any of it, and Rashida Tlaib and Omar… There’s no reason they want to get in there to further relations, to learn about Israel so they can better do their job.

If Israel is so hateful, why is her grandmother and other family still living there? Does anybody wonder about that? From Russia collusion, to racism, it’s all the same: Whatever we do, we have to distract from what Hillary and Obama did to fix the election; smear Trump out of office. Now the exploitation of a grandparent to advance a lie about Israeli racism. It’s the exact opposite. Tlaib and Omar view Israel as an enemy oppressor. They don’t try to hide it. They are part of an ongoing boycott movement of Israel.

Omar and Tlaib are frauds just like the New York Times has become. They are proud smear artists of the left. Think of Israel as a home. Would you knowingly invite people who don’t think you have a right to be alive into your house? Maybe not a right to be alive. Would you invite people who wish you weren’t alive and don’t think you should be? Would you invite anybody into your home who think you have no right to your home? What if somebody told you, “You must! You must let them in. They are members of Congress and they’re running a boycott on your home but you need to let them in.” Why? 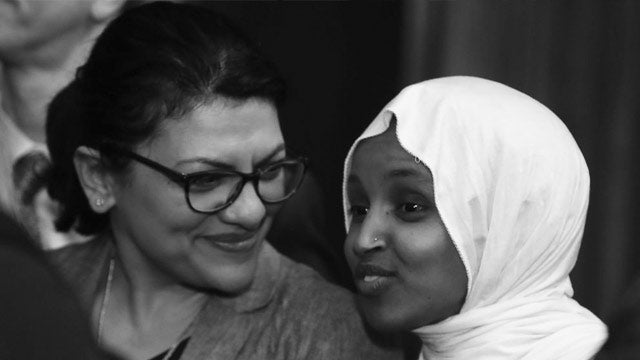 You think that Omar and Tlaib would allow a delegation of Israelis and Jewish people into their homes, their offices and so forth? This is so patently obvious, and the Drive-Bys are all over this, simply because it allows them to point fingers of discrimination at Trump and Netanyahu. It’s classic! Speaking of Netanyahu, Netanyahu said the “sole objective” for Rashida Tlaib and Ilhan Omar’s trip to Israel was to “deny Israel’s legitimacy.” You know, he said this on Twitter. Yes, it was a substantial Twitter thread explaining the decision to deny these two women entry into the country.

He said, “Only a few days ago, we received their itinerary for their visit in Israel, which revealed that they planned a visit whose sole objective is to strengthen the boycott against us and deny Israel’s legitimacy.” That’s why they want to go. That’s why they wanted in. Writes Netanyahu, “For instance: they listed the destination of their trip as Palestine and not Israel, and unlike all Democratic and Republican members of Congress who have visited Israel, they did not request to meet any Israeli officials,” meaning Omar and Tlaib didn’t, “either from the government or the opposition.”

He later added, “[T]he itinerary of the two congresswomen reveals that the sole purpose of their visit is to harm Israel and increase incitement against it.” Crazy Bernie weighed in and said if Israel doesn’t “want members of U.S. Congress to visit them, maybe they don’t want American money as well,” which… (chuckles) I love hearing Democrats bringing up money and how they’re going to give it away or take it away or whatever. It’s so indicative of the way they view the operation of the government.