RUSH: Folks, we got Jay-Z news today. Mr. Z continues to be in the news. There are a lot of African-American sports Drive-Bys who are not happy with Mr. Z. They are not happy. And they’re not happy with Robert Kraft, the owner of the New England Patriots for co-opting Mr. Z. A white plantation owner, i.e., Robert Kraft, has once again co-opted a black billionaire. Wait until you hear this. It’s priceless.

RUSH: On to Mr. Jay-Z and the NFL because there are people in the sports Drive-By business that are not happy with Mr. Z. Yesterday I made an observation — we played a sound bite of Mr. Z with his joint press conference with Roger Goodell. If you missed this, the NFL made a deal with Jay-Z. Jay-Z is now in charge of music at the NFL, including the halftime show at the Super Bowl every year. And there was a joint press conference. 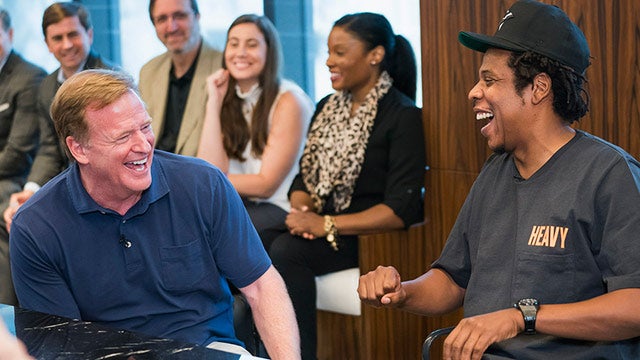 And there’s a lot of people unhappy with Jay-Z because they thought Jay-Z was on Colin Kaepernick’s side, that Jay-Z was all for the protests of the flag and the National Anthem. And they were going to keep it up until some team hired Kaepernick and gave him a job. Yesterday, Jay-Z said it was never about Kap. (paraphrasing) “This was never about Kap. I talked with Kap. I had a call with Kap.”

“What did you and Kap talk about?”

“Well, I’m not going to tell you what we talked about, but I told Kap it’s not about him getting a job. It’s about much, much more than that.”

So today, remember Jemele Hill, the really angry activist who was a journalist at ESPN, ended up being fired for all the anti-Trump tweets. She’s now got a job at The Atlantic, and she has written — she just wants to unload on Jay-Z. And she gets close to it but then pulls back because he’s a rich African-American billionaire and she doesn’t want to get on his bad side.

And now Jay-Z has done a deal with the NFL, taken their money where Kaepernick isn’t even a factor. So there’s a lot of people disappointed, a lot of people angry. But there’s also people very happy. Here’s Michael Eric Dyson, well-known — well, the guy’s a racist. He’s African-American. He’s a professor, Princeton I guess. But of course African-Americans can’t be racist, you see, because they don’t have the power to discriminate against anybody. So they can’t be racist. You can’t call them racist. But the guy is, and he’s angry and he’s militant. And as such, he rarely makes much sense.

So he was on CNN this afternoon talking about all this. I’m sorry, Georgetown professor. I thought he was at Princeton. Maybe he was at Princeton at one time. So Brianna Keilar is the info babe. She said, “Do you think Jay-Z is better positioned to effect change in this role, the NFL music director, than if he didn’t have this deal with them?”

DYSON: Of course. Jay-Z is saying that — like Jesse Jackson, Jesse Jackson would go out and protest. Al Sharpton would go out and protest. You’re doing wrong. We’re gonna call you to account. Then when those corporations or those businesses would come to the table and say, “What can we do to make things better?” then you’ve gotta have a blueprint. You’ve gotta have a plan. Colin Kaepernick’s protest is extremely necessary, taking a knee is extremely necessary. Now what’s the follow-up?

RUSH: You need me to translate this. What do you think he just said, Mr. Snerdley? You want to take a flyer on this? No, he’s praising Jay-Z as a shakedown artist in the same vein as Jesse Jackson and Al Sharpton. He’s praising him! He said Jay-Z has learned his lesson. He’s learned well. Like the Reverend Jackson, like Al Sharpton, go out and protest and you bring these companies to the table. He didn’t say it. But you shake them down, they give you money to go away, and that’s what Jay-Z has done here. 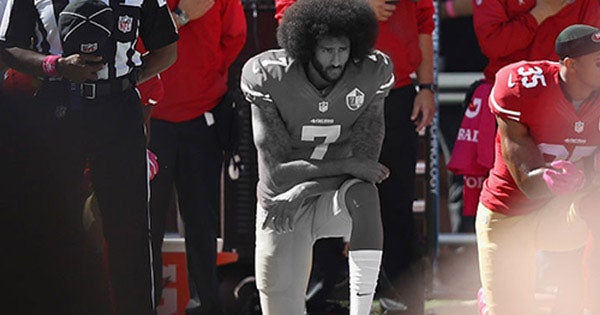 Now, Kaepernick’s protest, that was necessary; taking a knee, very necessary. But that’s then and this is now. Kaepernick was useful for a while, but now Jay-Z has rendered Kaepernick unnecessary. Now, before we get to the Jemele Hill story in The Atlantic, there’s one more. A Breitbart story: “Former ESPN personality Jemele Hill accused New England Patriots owner Robert Kraft of using ‘white privilege’ and trafficking in the ‘cultural capital of black entertainers,’ while criticizing the longtime owner’s role in brokering a social justice compact between the NFL and rap mogul Jay-Z.”

Can I translate this for you? Jemele Hill is essentially saying (translated): Poor Jay-Z. He’s an idiot. He got hoodwinked by this evil white guy that’s a friend of Trump’s! He sold out to an evil white guy friend of Trump’s. This is not good for us! “Hill wrote that Kraft’s conduct was an example of ‘white privilege,’ because Kraft is a Trump donor who maintains his relationship with the ‘racist’ president, despite using the ‘cultural capital of black entertainers’ such as Jay-Z.” I know what she’s talking about, because Robert Kraft pals around with these guys.

He goes to Jay-Z’s sports bar! He’ll show up at Hollywood award shows and Jay-Z is there and Kraft will be up on stage with him. Jemele Hill doesn’t like this. She thinks that Robert Kraft is simply trading on his “white privilege” and trying to get in good with Jay-Z’s audience, while still remaining a supporter of the racist Donald Trump. You know, I read what these people think, and I couldn’t get up every day if my life was going to be this miserable.

If everything I was going to look at and see was going to make me mad and think that all I’m dealing with is a bunch of sellouts and a bunch of frauds — particularly about race — I would just be miserable. I don’t know who it is that wants to see the world this way! Now, here is the Jemele Hill story at The Atlantic, and the headline here: “Jay-Z Helped the NFL Banish Colin Kaepernick.” By the way, I have to say that I’ve pointed out, it sounded like Kaepernick was thrown overboard yesterday by Jay-Z, because now that he’s got his deal with the NFL, whatever Kaepernick was doing is irrelevant.

The pull quote of the entire piece is this: “Jay-Z has given the NFL exactly what it wanted: guilt-free access to black audiences, culture, entertainers, and influencers,” without having to pay anything substantively at all. Man, she is ticked off. She is ticked off. She thinks that Jay-Z has basically given the NFL a clean slate; that by making this deal to become director of halftime music at the Super Bowl — and providing the NFL with credibility and entree to black entertainment and black audiences and black culture — the NFL is getting a pass for what it did to Kaepernick and blackballing him.

Now Jay-Z has been co-opted in making this all happen. So all is not well in Hip Hopville.

RUSH: Strangely enough, if you are a militant, angry, protesting-type, African-American, leftist journalist, I could see where this would tick you off. You’ve got the wealthiest and most successful hip hop performer now under your wing, now in your building in the NFL. And so the charge, the NFL is racist and bigoted, that kind of gotta “fall on deaf ears” now. And that’s why they’re ticked off for giving this to the NFL. What does all this ultimately prove, ladies and gentlemen?

Why ultimately did Mr. Z decide to throw away the social justice? Why did he do it? Because he’s done it. He’s thrown away the social justice in exchange for what? Acceptance and power and money in the establishment. And one of the best-kept secrets out there is that Mr. Z, for all else that he may be, is a primo-capitalist. And in that he has nothing in common with the Reverend Jackson or Reverend Sharpton.