What Did El Rushbo Think of Woodstock at the Time?

RUSH: We’ve got a call about Woodstock from Millbourne, Pennsylvania. I’m going to grab it up there. Chris, great to have you, sir, on the EIB Network on Open Line Friday. Hi.

CALLER: So, I figure you were 18 probably 50 years ago. So were you tempted to go to Woodstock? What did you think? 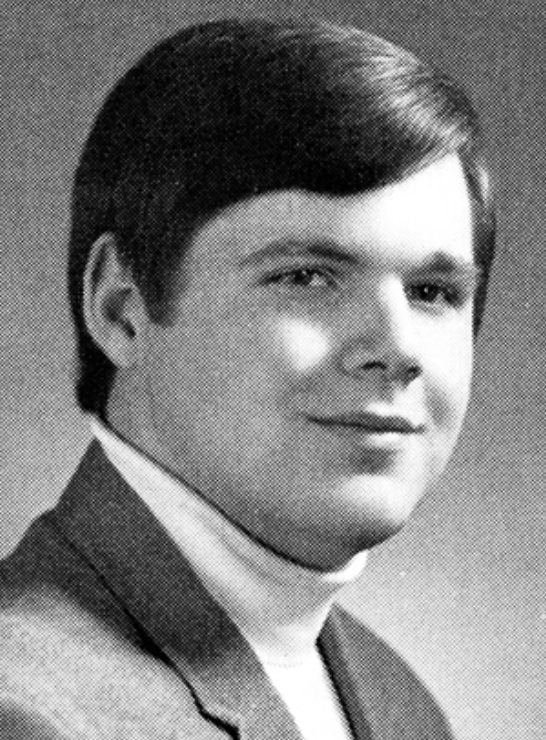 CALLER: Did you grow your hair long?

RUSH: Nope, never did. In fact, back then I did everything I could to avoid looking like I was in my generation.

CALLER: Yeah, a lot of people did.

RUSH: I did not grow my hair long. I didn’t blow up bank buildings. I didn’t join protests. I didn’t play —

CALLER: But what did you think of it, though? It must have been something that was, you know —

RUSH: Well, I was a D.J. then. I was already working on the radio. I was playing tunes by the people that were there, the acts that were at Woodstock. It was August of 1969. I was 18. I’m trying to think, I was just out of high school, so it was a great summer. The drudgery of going to college was right around the corner, so that was the only negative to it. When I finally saw pictures of it, I just thanked God I was not there.

CALLER: What do you think about it now, 50 years later?

RUSH: A historical event that was, I think, especially exemplary of the generation of that era. I think it’s one of the greatest illustrations of who young people were in that era and what was important to them. The Vietnam War was raging, and that was a central theme of the whole thing.

But, look, I’m hem-hawing here because I’m down now to 10 seconds, but I promise you I’ll address this. If you want to hang on, feel free to hang on if you want to weigh in on this. But I’ve got to take a break here. Be patient and be cool, and we’ll be back and move on before you know it.

RUSH: It’s Open Line Friday, and we have a really great Open Line Friday caller. This is Chris in Millbourne, Pennsylvania, asking my impressions of Woodstock at the time.

And you know, I haven’t thought about this in a long time, even with all the Woodstock stuff on TV. I was watching during show prep today CNN had Carlos Santana on. And Carlos Santana was reliving what it was like to go on stage at 2.00 a.m., way earlier than he had been told because another band couldn’t make it.

And they were talking about the logistics nightmare of getting in and out of there with that many people and all the rain and the mud and the muck and the bad LSD that was rolling around. I had a bunch of memories cascading back, but you know something, Chris? I mentioned to you earlier that back then the counter-culture ’60s were such that I made an active decision in my mid-teens. I didn’t want anybody to think that I was part of that generation, that group.

CALLER: That’s interesting. I was in high school 10 years later, and I didn’t even know about it. And then I went into the Army and I saw the movie for the first time when I was in the Army in ’89.

RUSH: So you didn’t find out about it until years after it had happened? 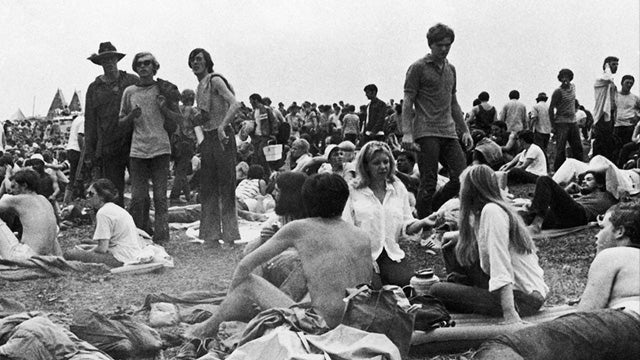 CALLER: The end of the summer of love period that it started, you know, like around ’65.

RUSH: Do you find it interesting that they can’t replicate it. They’ve tried to do Woodstock II. They’ve gone to all the acts that are still around and asked them, “Would you come back and do it?” I was reading, John Fogerty of Creedence Clearwater Revival — they have since disbanded over typical problems that rock bands have. But Fogerty said he was willing to go back and was signed up to go back and then the whole thing fell apart.

I remember – now this is really odd — another thing I thought, when I found out this thing took place on a farm, and that the farm was owned by a guy named Max Yasgur, I asked myself, “Why would some respectable farmer turn over his land and have it become a pigsty like this?”

RUSH: I mean, I’m just sharing with you random thoughts I had with you at the time. But it is historic. There’s no question it’s historic. And I was 18 when it happened. But also, I’m from the middle of the country. I’m smack dab in — I’m in Missouri. Nothing whatsoever in common with the people that were there. The culture was all different. The way we were raised was all different.

Chris, I’ll tell you, honest to God, I’ve said this, too, I think if I had been born anywhere other than where I was, I may not have been a success at this radio program. If I had any other life experiences, different set of values, for example, I don’t think that I would have had quite the ability I’ve had to relate to mass numbers of people as I have had by growing up in the heartland of the country.

It’s not a put-down to anything. You think about these things, the what-ifs. What if I had been born in New York? You play pretend games. Could it still have happened? Would it have? And of course, there’s no way of knowing because you can’t change the past. But it’s still something interesting to conjure. 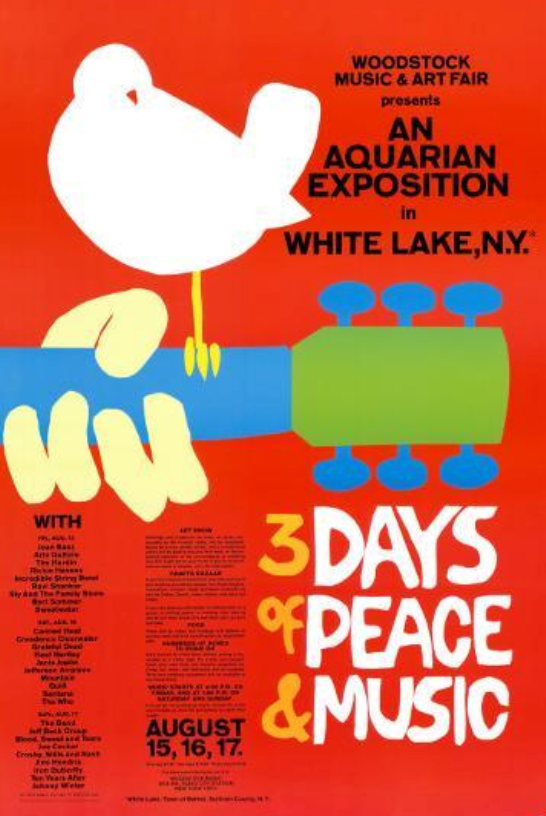 I look at Woodstock today as an historical event that was emblematic of the era of the times, with the Vietnam War and real hatred of government because of it, distrust of government. And the ’60s counter-culture mixing with rock the way that it did to form a cultural statement, and we are still being governed by people in that era who have grown up. Like Bill Clinton was part of that culture, a bunch of people that have grown up in the ’60s have become elected officials in government, or did.

So it has its historical relevance, but at basic it was just a gigantic rock concert. And I’m fascinated, as I say, by the fact that they are not able to do take two, which makes sense. Woodstock, for all that it was, was this gigantic spontaneous event. It was a planned rock concert, but nobody ever thought it would shut down the New York throughway. Nobody ever thought it would become as gigantic as it did.

Word spread, and if you were anywhere near Woodstock, you went. You tried to get there, and there was nothing that was going to stop you — mudslides, thunderstorms, lightning, rain — none of it was going to stop you. You got there. There were bad drugs all over the place. EMS people couldn’t get in to help people that OD’d. There was a particularly bad lot of LSD. It was so bad that they were warning people from the stage to avoid the purple packs of LSD. It was that bad. People were tripping out and injuring themselves tremendously.

So they want to do it again. It’s like my age-old theory: You have something that happens, a party at somebody’s house or somewhere, that spontaneously comes together, not planned, and it’s just great, it’s such a great time. Let’s do it again next Saturday. And you try and you just can’t make it the same because everybody’s trying to make it what it was rather than just showing up and being. And they tried to do Woodstock again and they couldn’t do it. It wasn’t even going to be at the original place. They were going to do it someplace else. It was a one-time thing, a one-off.

The minute the music from it became available, a gigantic collection of LPs, it was albums back then, and Super 8, I had a Super 8 player in my car, 12 speakers in my car. I had two woofers in the back, the upright part of the chair in the back. I could feel the base pounding my spine. Custom install in my Pontiac LeMans, 12 speakers in there, dude, and I was jamming everywhere. And some of the music I liked. Some of it I hated. But I remember listening to it.

Creedence, Stones, I love Creedence. I love Fogerty. He probably hates me. But I love John Fogerty. I just loved them. The talent they had. They were on one of those two- or three-year rolls where their creativity was limitless. It knew no bounds.

And, let’s see, I don’t want to sit here and say who I didn’t like. Jimi Hendrix, Crosstown Traffic, all Along the Watchtower — but I’ll tell you who I can do without. No, I shouldn’t. I’m too famous. I can’t say who I don’t like because it gets back to them.

And then when that many people showed up, based on that false premise, they had to announce from the stage the Beatles weren’t coming. And that’s when everything went to hell, coupled with the massive thunderstorms and so forth.